I’ve been doing this gun for my movie. I would like some C&C.
It’s a modified 1911a, with a double edged ka-bar.

But im concerned about the back, where the hammer is:
Does it look like that?

Hope you guys can see PNG, if not, complain to me.

I like it.
Clean mesh, great wooden table, a good knife plus the magazine of the gun.
What seems a bit off is the halo on one of the bullets.
Also, in the render the gun looks a bit flat and round to me and it looks like plastic instead of metal.
About the hammer - it could indeed use a bit of improvement. But hey, that’s why it’s a work in progress

The whole is my taste, though

Looks good.
If I had any complaints, I’d say the blade of the knife is a bit too reflective (perhaps some scratches?) and, (I don’t know much about guns, so I could be way off) doesn’t the hammer have a part that sticks out towards the gun, to strike the bullet? (or is it there and I just don’t see it?)

Well I got a pic of a real 1911a and put it under your wires…and you have alot of tweaking to do.

I would recommend you do some tutorials, because honestly the sub-d can be used in a much better, controlled way. The way that I like to do sub-d is to start with a low poly mesh and then work it up to get nicer edges with the sub-d. This way you make sure everything is correct with the lowres, since it is easier to work.

So I would think looking up game art tutorials for m0deling guns would be your best bet. Learn to m0del them low poly and then work on the higher poly stuff. Because right now I cant really tell that your gun is a 1911a.

Also as far as reference, Start using blueprints and pictures in the background to m0del off of. For example you “kabar” it doesnt really look like a kabar at all. Using blueprints and taking your time really pay off, because your results look alot more exact and realistic. The main thing to remember in 3d is this…it takes time to get anything that is good…and when you realize that, your m0dels will turn out 10 times better. Just take your time and make it to the best of your ability, you dont have deadlines really so use that fact…and take your time.

I would be willing to help you out if you have questions about m0deling any parts. So just pm me if you need help…or just ask in the thread

The monkey: Thats the way i have been working (the box moddeling sub-d thing), and you can get 1911a’s in almost any sizes and lengths, this gun has and extended barrel for better precision. And i have been using reference.
The handle is of some rubber kind of thing, for better grasp, so i decided to make i a little curvy to follow the fingers shape.
Remember, its modified!

Capt. Oblivion, Yes normally guns have that small ‘pin’ at the hammer, but not some of them. Ill deal with the blade.

Please don’t take the crits too personally. It would be helpful if you’d give us a little insight as to how long you have been using blender ect. This way we can gear our comments to your skill level and give you more helpful information. Make no mistake, the work has potential, it just needs some refinement. What sort of movie will this be?

Some thoughts on the subject…
Auto’s use a hammer to strike the firing pin which is inside the rear of the slide. SA and some DA revolvers have the pin built into the hammer, though more DA revolvers are going to an internal firing pin.

Not a crit but just some info: The m1911a is a military designation and is not modified beyond what you see in the posted picture. Any modified version of the 1911 is simply referred to as a “1911, 1911 custom or 45 auto custom”

Pointer - The 1911 can be outfitted with Pachmayr Combat Plus grips which are wrap around rubber style which you have modeled.
http://www.lymanproducts.com/pachmayr/images/GMG.jpg

Pointer - The slides / barrel assemblies for 1911s come in many different lengths, just depends on how long you want it.
http://www.lymanproducts.com/pachmayr/images/colt.jpg

Crit - The grip safety (thing that runs up the rear of the frame under the grip safety.) is too far out, just slide it inside the 1911 a little more.

Crit - The beaver tail safety assembly is a separate piece of the frame and is rarely present on stock m1911s. Suggestion on how to fix this would simply be to refer to it as a “1911 custom.”

Crit - 1911s are very thin, also they USUALLY only accept single stack magazines. Though STI makes a double stack 1911. The basic width of your 1911’s frame is just about right. Maybe make it a tad thinner. The grips need to be wider though. (From the rear view.)

Traitor: Thanks!, ill fix that, could some one please send me a ref of the gun and a mag?

Pink mesh (Now the typing begins ;)): Im not taking it personally, but its hard to show in a post without using to many smilies (like now)

I’ve been using blender for 1½ months now, though im not new to 3d.
The movie (as far as i have decided, is an action movie. Some hitman movie probably) Its my first model, besides all those cubes and spferes, which we all have been playing around with :).

Ejection port: Yes, i will be making an ejection port, but im having a hard time cutting it out, the subdivision is messing it up. But i’ll keep trying.

Many thanks for your detailed help!

Heres one of my reference images. You can see that it doesn’t have that hammer thing.

Oh. I forgot to say that its fully animatable…

Ok I understand that it is modified, but I think that alot of users on this forum call things “modified” as an excuse to not make it exact. The thing that really bothers me, is if you didnt say that this was a 1911a I wouldnt of known it. Its ok to “modify” things, but when they dont read like the original object anymore…then its bad.

So I really dont know about why it is “modified” but don’t use it as an excuse to not make it exact.

I think in your reference picture, the hammer is there…it is just cocked.

Could you post your mesh without the sub-d? and some wires as well, would help critique. If you are starting with the lower poly mesh, the ejection port shouldnt be too hard.

Pretty good for 2 months in Blender, certainly not bad for a first model in Blender. Hittman movie like the game? or with a different plot? No crits for this post, just some info:

The subsurf may be pulling your edge out, you could try using shift E on the edge of the ejection port.

If you look closely at the image you’ve posted, you will see the “Commander” hammer’s strike face and the rounded thumb grip which is lowered into the beaver tail.

You may see better modeling results by using the vert modeling method. I find it faster and much more accurate then the box method. Only downside is you have to manipulate almost every vert and there is a fair amount of face filling and extruding. The end results are well worth it as the final meshes are clean, lean and highly detailed.

Thinks of writing a tutorial on vert modeling guns.

Example wire of my 1911 which was done with the vert method without subsurf.

Pink mesh: I decided to remodel it from scratch… I have tried edge creasing, but i needed more control…

Anyways, i’ll make an original movie, no hitman fan movie, my own creation… Maybe something like a movie called ‘The boondock saints’… where two brothers are killing evil men in the name of god… I’ll find out…

(Please notice, I’m not following the visible reference picture, its another one which you can see some of in the lower right viewport)

The monkey: The only modified is the beavertail and the grip…

Progressing nicely. If I understand correctly, you are following the reference picture in the lower right rather then the one in the top right.

My only real crit would be to align the verts for back “spine” of the frame. Especially in the rear above the magazine well, the two sets of verts there look abit out of alignment with the slant of the grip.

Other then that, progressing nicely. Keep up the good work.

Yes that’s correct, here’s a picture of my ‘real’ reference:

Im not sure which vertices you are talking about??, could you paint a picture for me?

Just align / flatten the rear verts so they look more like the red line. Other then that, looking good. 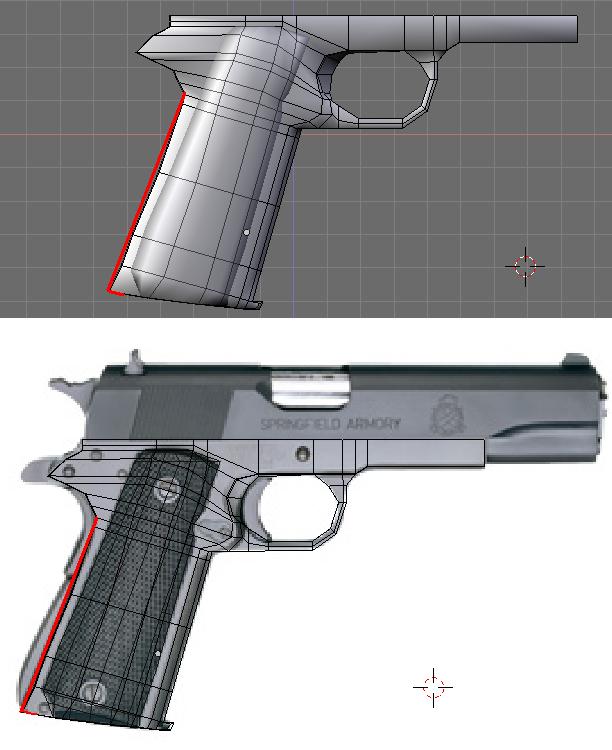 Sorry if you might feel this topic is dead, its not, i’ve just been on vacation, and right now im having a (small) break from my gun, and i’m working on a suit, a city, and a restaurant…:o. But later today, i’ll post some pictures of my suit, its processing really nicely.

Looking forward to the updated progress!

The suit is one of the hardest things that i’d ever model…First i tried the box shaping way, didnt’ work, then a cylinder…At last i started modelling the collar (Isn’t it the thing around the neck), and worked from there, the base model is great i think… Now is it only the shape…I tried for like hours to get it look right, i just cant :mad:.

Here are some pics… please come with some C&C, so the model will look right…

I guess i have to make a new thread to get this any attention!?

Have you tried rigging that suit to see how you could make it deform properly? Also I’d be intrested in seeing an update on the gun.

Are you making any plans for the restaurant beforehand or are you just going to imporvise?

Yeah i have got much attention, but not my suit

Thanks anyways, i’ll post an update later (of the gun)

About the restaurant: Why do you want to know? (not ment aggresive) I’m planning to have a lot of glass in it… Its a movie with ACTION!, the plot?, well i got the idea in my head, and it’ll stay there for now

About the rigging, i’ll wait till i get the right shape, and the modify it…