Do someone know if is it planed to provide an unsmooth UI font ?
The new interface look very good, but it’s painfull after 1 hour of work, the unsmooth font is painfull to read

raphael… could you please post a screenie of the unreadable font? I’m also on Linux and the current setup seems quite readable.

Dang it Vainqueur, you’ve started yet another 2.5 thread. :yes:

@raphael- I don’t think it’s so much the smoothing but the colors, I know that when we can save the theme I will switch my fonts to white, and bigger. You should play around with the colors yourself and see if you find something you like better.

it’s not so big, but enought to be painfull

And yet… so different from what I am experiencing:

You didn’t resize your image did you? 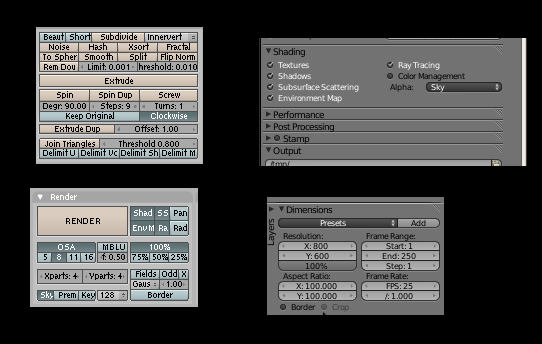 it’s not so big, but enought to be painfull

You didn’t resize your image did you?

Ctrl+MMB to zoom the panels. At such small zoom, it is indeed hard to read the smoothed version.

And yet… so different from what I am experiencing:
That’s because you haven’t scaled the buttons down very much.

I have everything as small as I can get it whilst still being readable and I agree with raphael, it does get painful after a while.

haaar… thank you [email protected]…
my english i poor but you said it well “That’s because you haven’t scaled the buttons down very much.”…and that’s the problem. Blender 2.5 hard to use if you have a small screen or if you need a large 3D space and thin bars on side.

Disable shadow size in outliner > user preferences > styles > style >>
You can’t save this but, if you work for hours, it cost you 10 seconds when you start a session. Mabe this helps a little for the next weeks until not all user preferences are storable.
A few months ago some people cry about the crapy “dos” fonts in 2.5 without antialiasing.

Blender 2.5 change every day and we are close by.

That’s because you haven’t scaled the buttons down very much.

I have everything as small as I can get it whilst still being readable and I agree with raphael, it does get painful after a while.

Why don’t you scale it down as small as it can get before being painful?

As someone said, turn of text shadow, that should help with really small font size. Changing the DPI could help too (this is different than scaling the whole UI).

Why don’t you scale it down as small as it can get before being painful?
Martin

Because it’s the way i like it, and it was nice in 2.49. But, if 2.5 as been design to keep panels large, why not disalowing resize, it would be more logical

As someone said, turn of text shadow, that should help with really small font size. Changing the DPI could help too (this is different than scaling the whole UI).

And, even with large fonts, wich are readable, it’s not comfortable, due to their slightly blured nature.

yeah anti-aliased fonts do cause a lot of eye strain… and just don’t look as crisp. The problem is that as they get smaller you lose clarity which is obvious in the pic he posted because the font gets smoothed and you lose the pixels you need to render the font and end up with a blur…You just end up with not enough pixels to render the font. That’s why you have to use a different type of anti-aliasing to make it look crisper on smaller fonts sizes or it could just automatically turn off when it gets too small.

He brings up a legitimate point. Not everyone likes or can read the the anti-aliased text. So it would be awesome if there was a quick way to turn off all the fancy font effects. Just because it looks good on your monitor and other people thinks it’s okay, it doesn’t mean that it works for everyone.

Any type effects like shadows and glows and embossing looks rubbish at small sizes… basic web and graphic design typography 101. Most interfaces that are used a lot in a technical environments specifically leave out type effects for that very reason. You don’t see programming IDE environments with drop shadows for a good reason. The more effects you have the more the legibility you lose.

The main point is he and many others find it hard to read, and and the user shouldn’t have to justify it with graphic design theory in order to get his point across… and it would be nice and super awesome to have an easy solution for him and others who struggle to read the fonts. Like a kill font effects global button in the user interface panel.

very well said, i could not say more in my own langage

raphael, out of curiosity, do you also complain to microsoft about their AA fonts in Word?
what about mozilla, gnome, MacOSX? they all use anti-aliased fonts as far as i know…

Just wanted to add my vote for having the option of non-antialiased fonts. In fact, this thread reminded me to turn them off in Windows 7. Ah, much better now.

dyf, as you can guess, the answer is yes, I dislike antialiased fonts in general for reading text on computer screens, and it was a frustration with gnome that I couldn’t have a clear non-aa system font like XP had. Maybe it’s just my eyes. I don’t wear glasses, but have a bit of astigmatism.

Oh, and the funny thing is that I do agree that AA fonts are prettier at first glance, but functionally, they are not as “comfortable”.

@dyf : i dislike gnome default fonts too… instead i use “terminus” font, very clear, perfectly readable.

I think it is quite obvious old blender fonts were much cleaner than 2.5.

I worked at this place where they put this smooth kind of font… It really put down the quality of the software. Especially the many hours of staring. So yes I agree with Raphael. I just hope that smooth fonts is just a fad.

I think it is quite obvious old blender fonts were much cleaner than 2.5.

What screen sizes/resolutions are you guys working with where either of those is legible? I have a 15 inch widescreen laptop, with a vertical resolution of 900 pixels, and I strain to read the text in either of those. (Although the least illegible out of that crap storm are the panel headers on the right from 2.5, but they’re a slightly larger font.)

I’ve been working with 2.5 day-in-day-out for two months now, and I’ve never had any issues with the fonts. They’re very easy on the eyes. No strain at all. Blender 2.4x was easily more straining on the eyes (though perhaps due to other factors).

But in any case, I get that people have different needs. I see no reason not to allow stair-steppy non-anti-aliased fonts from the days of 640x480 screens for those who want them…

Once font styles are saved with your custom theme then I’ll just remove the drop shadows and make them 1 or 2 sizes bigger (so they don’t screw things up visually), that with the theme change I did and then using a trick pointed out by someone to save the colors should make things a bit easier for me or anyone to read.:yes: