Since I upgraded to 2.57, I dropped down some of the old projects I was doing with the old versions. It is not that they aren’t working with 2.57 but because they are filled with mistakes and I want to get used to the new nifty features of 2.57 by starting from the beginning (modeling, rigging and so on).

This character will go very slow as I try to chain my civic duties with my 3D hobby. By the moment it looks like this:

Also, need to struggle to make the hands first. Gonna be tricky since I have no experience making hands and I’m not following any tutorial because his hands have 4 fingers, and the topos of most tutorials are for 5 fingered human hands :spin:

Let’s see how it will go… I’ll try to be optimist and persevere.

You can adjust the size of the image under the render settings panel of the properties tab on the far right column of the default layout. The setting you want should be under the ‘dimensions’ group and the ‘resolution’ heading which allows you to set the width (x) and height (y) of the image.

I like it. deadmau5 has a new friend/possibly enemy.

Deadmau5…dr00l
Can you sketch the scene where this littl buddy is going to be placed in?

Deadmau5? Never heard about that one checks Google Oh, now I see the similitudes :rolleyes:

Sorry if I update this thread very slowly, civic life takes up too much of my time to advance the model but I keep carrying on in my spare time. This is the result (click for full image):

I’m still struggling with the camera. When I want it to have more X than Y, it increases and decreases the height of the camera instead and I can’t fit the 3 models on screen properly for rendering. Any clues to work around that and fully customize the render output height + width size?
I experimented a little with the panorama camera and looks like I managed to fit everything into the shot, but there are way too much empty space at the bottom and top :spin:

My experiences so far were my lack of modeling experience. First the hooves - tried to make them directly onto the main model and started to edge loop too much around the finished hooves looked so pinched and ugly. I chopped them and made the hooves as a separate model but the I’m not fully convinced about the results ponders
To top it all, I couldn’t delete the extra edge loops that ran across the main model because I “forgot” to save it before doing the first hooves. Noob mistakes as usual…

Then the hands. I have zero experience with them, and mostly all tutorials around are to make 5 fingered hands, so I needed to improvise on the fly until I felt satisfied with the topology of the hands. Spent like 4 hours doing the hands, and ultimately decided to make the nails as separate objects as well. The arms and hands aren’t still closer to what I want to achieve but until I can bend them down I don’t think I can model them better.
Question: Can I keep modeling the main body after I insert a rigged skeleton? Like, I want to put the arms close to his body to see if the length of the arms are correct and try to fix them, but I’m not too sure if to insert a rigged skeleton or to bend them manually without a skeleton. What could be better?

I’m also not sure about the fundoshi loincloth I made for him. Is the first time I model clothes onto a character and it sucks when the clothes goes into the main model. I made the loincloth as a separate model, out from a cube, the same for the hood. Supposedly the hood has a knot below the chin of the character, but I wasn’t sure if to extrude it from the hood or add it as a separate model and see if it would stick. I decided to extrude it and again committed horrible mistakes like when I started making the hooves. If it looks terrible when I start animating the character, I’ll try making the knot as a separate object.

That’s it. My amateur odyssey into modeling a character, with all the bitter hardships and small sweet achievements. I’m happy it is turning out good (at least for my taste).
I don’t know how to make a render with “wires” so no wires provided sorry

@ChevyVanDudeG20 - The scene is still undecided. By the moment is only modeling the character and make different parts to inter-change them in order to make a tribe.

@darkmag07 - I should have checked this comment before making the render. Will try your advice next time 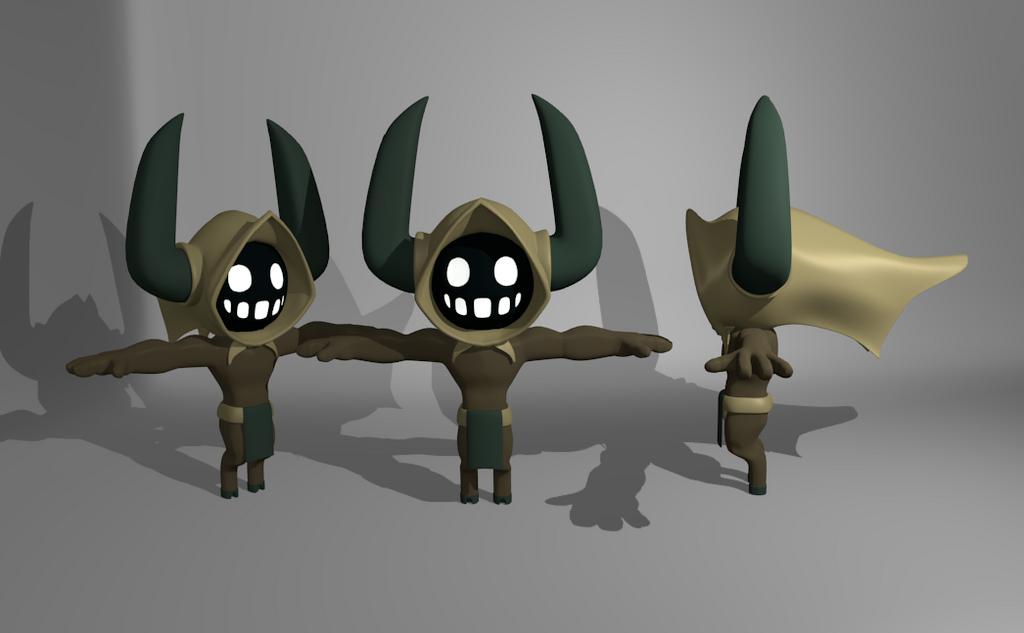 Adding details little by little. I discovered Ambient Occlusion by accident (yey for me). I failed to render it with wires but the wires are already too horrid to be shown so, let’s keep them hidden.

This time I moved and reshaped the arms to keep the proportions (because they were way too long and the hands were way too big). Added the nails as separate objects, nipples and punched a navel, yeah. I also made the ragged details of the hood and the loincloth (I’m not convinced by the holes made on the loincloth - probably are way too pinched but I don’t know how to properly punch some nice small holes with the actual topology).

Next movement would be to detail the horns and add other small details around the flesh, like the wrinkles around the nails, elbow and knees. I think it is already good to start some good rig… Slowly getting there. 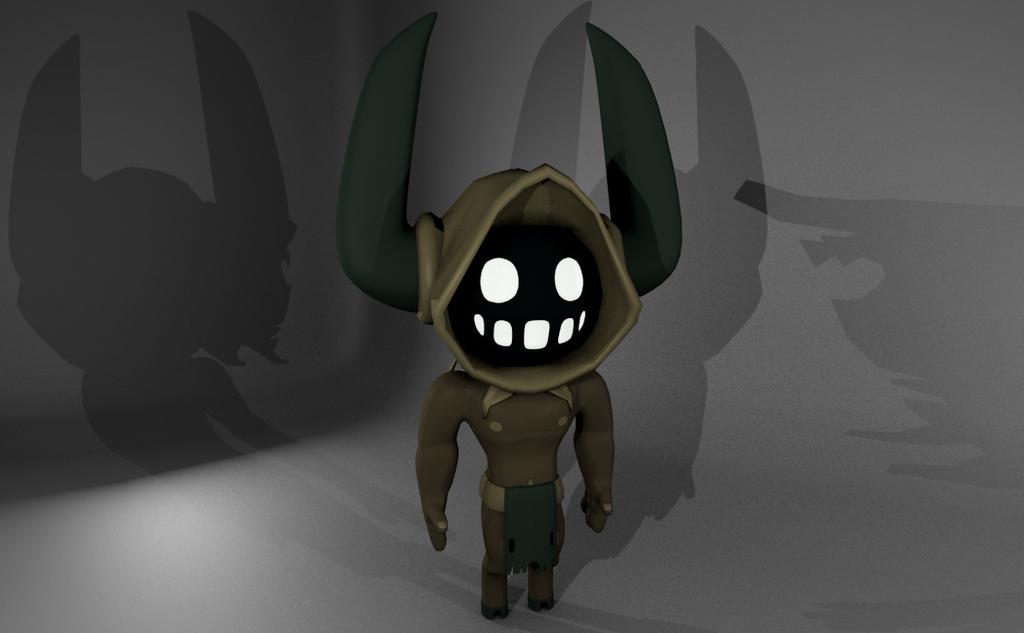 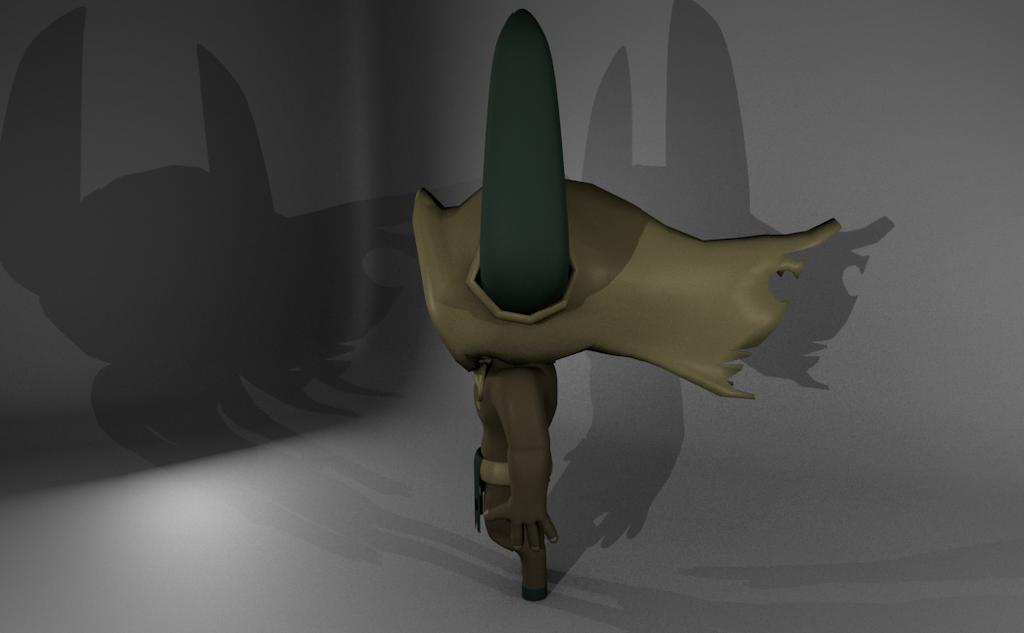