2.79 update Wednesday of this week

I’m a little confused and actually concerned nothing has happened at Blender in Amsterdam. And, the reason for that confusion is a test build of 2.79a was set for Wednesday of this week was my understanding. The reason for the concern is major events can happen in any workplace. So here’s hoping that the latter is not the case.

For my limited skills, not exactly pushing the envelope, 2.79 could be the last Blender on my machine and given some new features and bug fixes I’m not all that excited about 2.8. Hell the work Lukas is doing with the denoiser is the only thing that could bring me screaming into 2.8.

That being said I understand the reason behind it and why some Blender Heads and studios are excited. The security concerns it seems are shared by 3d programs used in major studios as well as anything Autodesk puts out. So while it’s understandable Ton would walk back the young mans comment what damn program or app can be bullet proof where these creepy crawlers are concerned.

Bugfixes are still being committed to the 2.79 release branch, so there’s no ‘major’ event and development is about as active as it’s been.

The BF has said before they want to see a rock solid end to 2.7x, so it makes sense to try to get as many fixes in as possible.

Also, 2.8x will have nice new workflow/usability features that will be enjoyed by users, even if they are not pushing the functionality. If you want, you can just activate the Blender 101 template and cruise along with easy to use widgets (you wouldn’t have to deal with hotkeys as much, but at the cost of the workflow speed being slower).

Bugfixes are still being committed to the 2.79 release branch, so there’s no ‘major’ event and development is about as active as it’s been.

The BF has said before they want to see a rock solid end to 2.7x, so it makes sense to try to get as many fixes in as possible.

Also, 2.8x will have nice new workflow/usability features that will be enjoyed by users, even if they are not pushing the functionality. If you want, you can just activate the Blender 101 template and cruise along with easy to use widgets (you wouldn’t have to deal with hotkeys as much, but at the cost of the workflow speed being slower).

I also prefer to wait even a month or 2 more for 2.79a, but have it rock solid. The tracker is above 300 confirmed bugs, still lot of crashers. I test 2.8x regularly, it’s very unstable. Adding a new layer of instability on top of 350 known bugs, most of which will still be relevant in 2.8x would be very bad for master. It would make buildbot unusable. And the switch has to be made one day. It’s not loosed time. It’s good for current pro user using stable and it will make the switch to 2.8x a better user experience too with a solid base to build upon.

I could have included this which was under the big Orange logo this week. And, maybe just overly optimistic on their part.

This tutorial just showed up on Blender Nation and here is his splash screen below. Now my question is where did he get it. 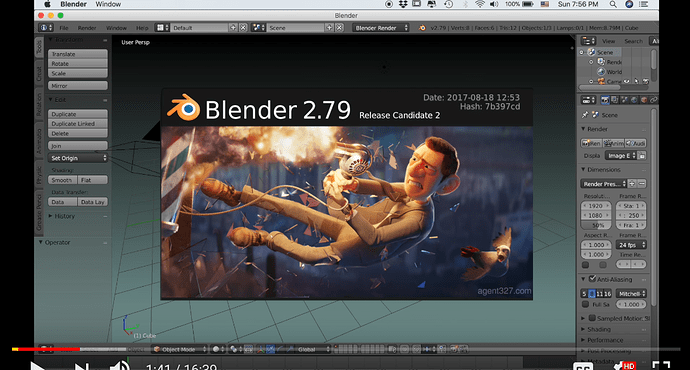 I am still on the fence about the new workflow (change is scary! :P)… but there are a few things I am quite excited for… such as persistent data option for cycles animations, more denoising work & eevee for playblasts. hopefully they dont mess up the mesh creation workflow for archviz artists.

Thanks guy I only picked up on ‘Release Candidate 2’ and the guy saying the latest version. Change can be a bitch except for the very young say 50 and below.

And, you just mentioned something I have not a clue about: persistent data option for cycles animation. The more diagnosing work does interest me. Hey, when attempting to animate on one machine that shit is magic. Once again thanks and take care out there.

The persistent data for cycles… means this.

when you are rendering an animation… every frame it processes all the geometry in the scene and loads it onto the GPU, this is before the actual rendering starts… with persistent data… it means it will process all the geometry for the first frame, then for subsequent frames it will only calculate whats changed and push that across.

Say right now the preprocessing part takes 1 minute, the rendering of the frame another 2 minutes… the first frame will take 3 minutes, but subsequent frames could be 2 minutes (depending on how much has changed).

‘Say right now the preprocessing part takes 1 minute, the rendering of the frame another 2 minutes… the first frame will take 3 minutes, but subsequent frames could be 2 minutes (depending on how much has changed)’

Now that would be a gift for some shots. I take it for rendering on the CPU a cache might be used.

Well, yet another Wednesday has come and gone with no new blender update. Hey, I remember 2.48 where new releases were like receiving a super decoder ring in the mail as a kid after sending in cereal box tops. Maybe a time many don’t remember on this forum. And a Sears catalog was referred to as The Wish Book by the women in the household. And, magazines actually had ads for a Red Ryder BB gun. And, you carried papers at the crack of dawn saving up for these things. An allowance if any was a dollar a week which got you into maybe three movies with a box of Good & Plenty.

OK it was different time and one maybe your grandfather or uncle remembers. A time where unless wealthy, or your sport was in season, kids were expected to work after school. So the brand name game of teenage clothes took on a whole new meaning when you were buying them. But, America was on the move and wages were rising. So I wouldn’t take the world for that experience. I am however sorry I decided to bore this forum with it. My anticipation of the last of 2.79 brought this on. From 2.49 to here has indeed been a trip. Thanks to many developers, some long since forgotten, who made this possible and Ton.

Maybe you should consider starting a blog.

Maybe you should consider starting a blog.

Sorry guy for the long tirade down memory lane.

The 2.79 branch just got some security fixes and a couple of crash fixes.

In general, the more delayed 2.79a is, the more fixes it will get (it’s probable that the core team does not want to face the possibility of needing a 2.79b, as that would take valuable time that can be spent on 2.8).

I have to agree and see quite a bit of activity going on. Although I don’t imagine the guys in Amsterdam and around the world are working overtime doing time and a half. So here’s wishing the developers a good weekend. And, maybe next Wednesday.

I mean it’s not some ship that has to sail tomorrow or a work until complete situation. God knows that was the worst scenario for a shipyard worker. I more then once went in on day shift and worked 23 and 1/2 hours since it seemed our contract kicked into some serious money and time off at 24 hours. But, when I was sent out the gate barely able to navigate two other shifts were still working and some were left on the ship still working until it docked hundred of miles up the coast. Leaving them with money for a plane ticket but smelling like a wet dog when showing up at the airport unshaven. So it is definitely not this ship will sail at 8:00 A.M. in spite of Hell.

And, my Super Decoder Ring will have to wait a few more days. Ace, their is another take on this I suppose. The more bug free and feature rich this last version of blender 2.79 is the more relaxed they can be bringing 2.8 on line. After all this is the Blender that made it’s way into studios and put blender on the map if you will. This also bought sponsors on line and as a consequence more developers. 2.79 is the culmination of a fantastic run. And, it wouldn’t surprise anyone if some of those same studios have both on their machines for months if not years into 2.8. After all if it’s working…

You can install any version of blender you want side by side with any other version as long as you go with the .zip distribution (do not grab the .msi on windows since that’ll allow only a single version to be installed)

also we’re haven’t deemed Wednesday an official release day, i’ll be ready when it’s ready, regardless of the day.

Ricky, how are you doing man. Yeah in another day I had three versions of blender on the machine. Sometimes several where the files might not have played nice. Simply rename a file and open in that version. And, if taking back to the earlier version in the case of 2.8 simply do so at your own risk.

As far as the Wednesday comment for two weeks the Blender Foundation has said Wednesday was the release date for 2.79a according to Blender Nation. So you have either been living in a fucking cave or attempting to bust this old mans balls. And, the comment we haven’t deemed Wednesday an official release day is laughable unless you are some stealth developer. Incognito baby, in the witness protection program, Special forces and Delta Force. Get the hell out of my face ass.

The Monday meeting stated that they were hoping to get a testbuild ready by Wednesday, there was nothing that indicated a concrete promise.

In FOSS, pretty much everything gets delayed to a point either because of previously unseen issues or because of lack of resources (this can even occur sometimes with the development of commercial programs).

The Monday meeting for two weeks has mentioned Wednesday. And, nobody thought that was etched in granite Ace. So what is your point except to wade in here. I quite frankly don’t give a rats ass if 2.79a comes out in May as long as it’s rock solid for studio use. In the interim I will sent two cereal box tops off with a quarter for an official G - Man ring.

And, yes they are now dealing with the security problem which you have to wonder about in this day and time. Have you ever seen a post; ‘Don’t open this Blend file’ on this forum. So until the attention was called to it apparently it wasn’t a huge problem. And, no doubt those post would have showed up like the ones on Craigslist about certain females. ’ Don’t touch this bitch with a ten foot pole’ However, somehow that never happened until blender became a go to program for many startup studios. Now suddenly there is a security problem with open source software. And, that is where I’m cynical. And, cynical to the ninth degree I might add.

Really, we should be grateful for all the open communication and updates. Life is good on this side of the fence. Compare Newtek or Maxon, and relish how lucky Blender users are in this respect.