2.80 - What am I doing wrong with this array/plane/dupliface thing?

So I’m trying to make a scene where I have these three cones that I want to have as an array in a circle. This seems like it shouldn’t be too difficult and yet…
I have a bezier curve (circle) and I have a plane. The plane has an array and curve modifier, putting copies around the circle. I then set the plane as the cone’s parent, then enabled Duplication on Face on the plane. But now, when the copies are created, they don’t appear along the face normal, but instead seem to be rotated orthogonal to the local normal.
Can someone please help me understand what I am doing wrong here?
Blend file: here 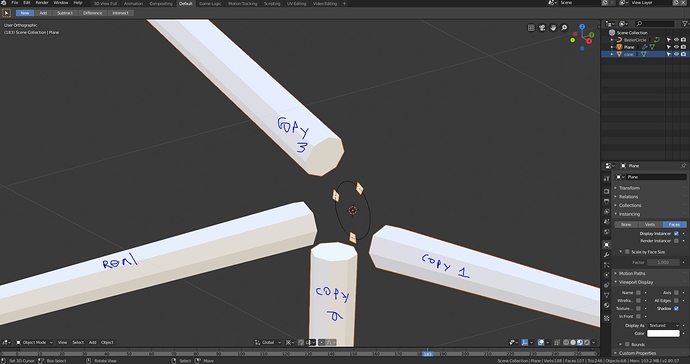 You can do this by adding an empty, place an array modifier on the cone and use the empty as an offset object. Set the number of copies you want in the array and clear the axial offsets and then rotate the empty. You may have to play with things in order to get the final rotation and position you want, or go on and apply the array and do as you will.

While doing this I centered your object. Apologies.

Glad I could help.