UM CONTO DE VISTA (http://www.youtube.com/watch?v=rS5RtfUokfQ)
I did this for University. I did it all in one semestre in wich I had 6 more subjects. It was also the first time I did anything in 3D. I’d already been playing around in Blender, but had never done a rig or textured (and the film has no textures, besides a generated one on the hair). The teacher was teaching Maya, but I chose to do it in Blender. the whole time I was trying to hide huge rigging problems, and I thought I was going to do cloth simulation for the clothes, but then I discovered that it would be impossible. I knew very close to nothing. (The credits say the software I used).

INSANIDADE VIRTUAL (http://www.youtube.com/watch?v=F8-CzzoC2Lo)
Once again it was done for University in one semestre (and it was a very busy one aswell). The animation was kinda rushed. I had alot of help in the video department. I still only used generated textures and the animation was rushed, because of time. I didn’t know about the functionalities of the Compositor or Video Editor, so I asked help in that department. The tracking is done with Voodoo. I think this one worked better, and I learned so much.

I also made the music for both films (although Insanidade Virtual was seriously rushed, using alot of presets and sample beats)
I learned a lot of Blender, and I plan to continue using it, although I need to use Maya for University. My final Master degree piece, next year, will be in Blender (I hope). 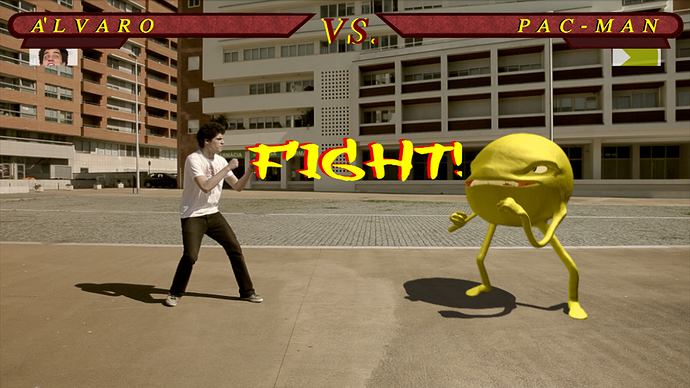