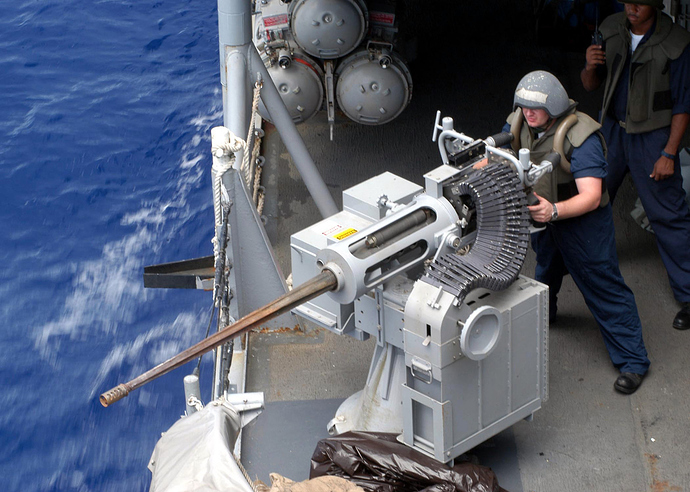 I’ve been working on this project to add a functional, manually operated, 25mm gun turret to Fallout 3. Although I’ve got a working rough model, got it functional (with some amazeballs help), pretty much finished the ammunition models, and dialed in the specs in the weapon form, I haven’t even been able to start work on the final model because I cannot seem to turn up any usable reference images.

I can find plenty of photos of the weapon system, but I can’t find any direct front, rear, side, or overhead orthographic sketches of it! Which I kind of need to overlay the model and basically trace to them. On Saturday I finally dug up the company that manufactures the mount and e-mailed them explaining the project and requesting non-sensitive design sketches. Still waiting on a response. It’s Monday, so…

So on Sunday, I finally started working on a final version by simply eyeballing it based on the photos I can find.

I had no faith in this method what-so-ever and expected it to be an unmitigated and unusable balls up. But now that I’ve started working on it… I think it’s turning out pretty decent considering! So far I’ve got the base and the bulk of the weapon’s housing. It’s a freakishly complex shape (for me) already and I feel like it’s going to have too many polys for the program to handle and just crash the whole thing as soon as you try to load it up. But I’m usually overly paranoid about such things. The game can actually handle a lot and the original resource files always wind up having about ten times more polys than anything I make myself.

Anyway, here it is. Still a lot of work to do to finish the housing and extras like controls, ammo box, chain guide, etc. then just as much more to make the weapon its self. But it’s a surprisingly good start. I don’t know what I’ll do if I actually manage to procure reference images from the manufacturer. If it’s not too far off I can just tweak the existing model to match them more closely, or I might have to start all over, but at least I’ll have my technique honed by then either way. 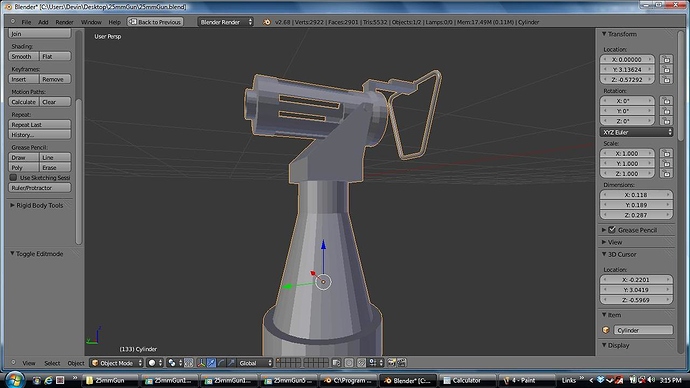 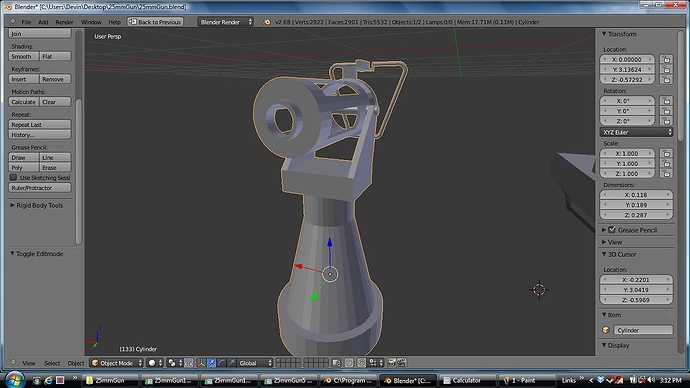 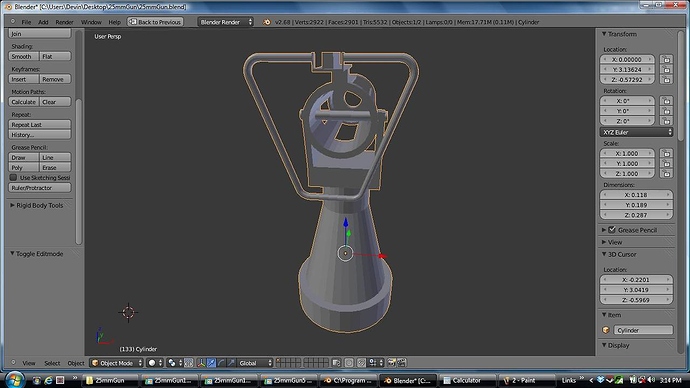 That is one bad ass looking gun, I’ll look forward to watching your progress. Did you find many reference images or blueprints?

Yeah, it’ll pretty much mess you up. On either end (note the shock absorbers built into the shoulder harness). Making one is pretty much gonna mess me up. It’s going to be insane in game though!

Thanks hopefully it will keep going as well as it seems to be so far.

Meh. A simple google search turns up plenty of pics of it, but nothing too useful for modeling from. Still waiting on a response from the manufacturer but then they probably just got the e-mail now. Like I said, I’ve just been eyeballing it from whatever pics I can get off the web.

looks pretty cool. I would paint out that brown plastic, personally.

Haha! Yeah, welcome to the Navy:
“What do I do with the important thing?”
“I don’t know, put a trash bag over it, maybe no one will notice.”

But the pic isn’t really the point, that’s just to show you guys what I’m trying to make. Here’s the progress I made on the model: 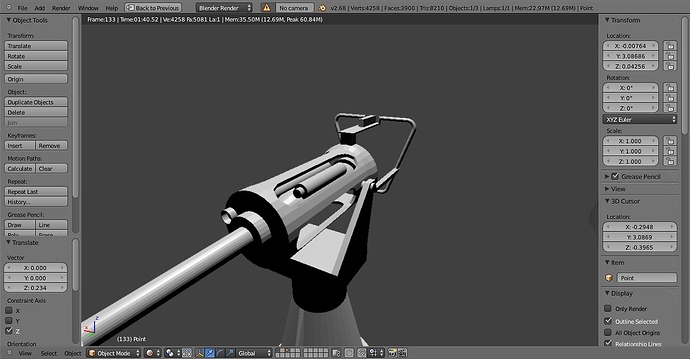 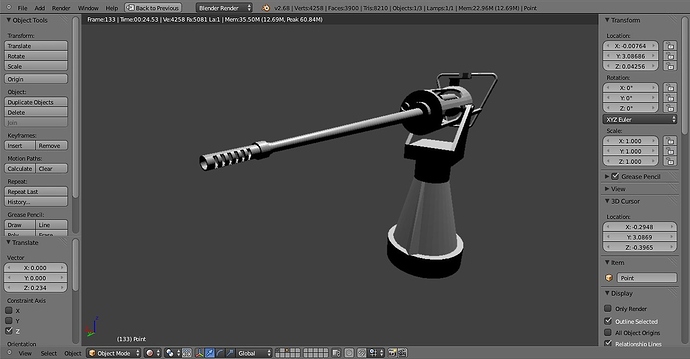 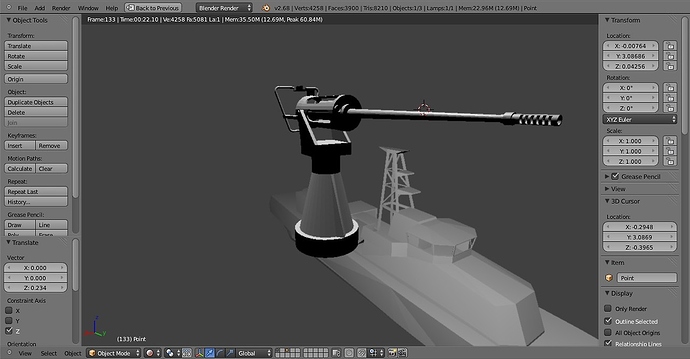 I rounded off the cutouts in the housing and extruded the barrel out from the housing, and whipped up the muzzle break. The tube to the right of the barrel is the ejection port for the brass, it’s protruding from the front of the housing too far, it should actually just be a hole in the housing it’s self but I’m having a hard time cutting a round hole in the flat surface. It’s becoming a real pain. A simple knife projection should work but it never seems to… for anything.

In the background you can see the Cyclone Class patrol boat that this is eventually going to be mounted to. 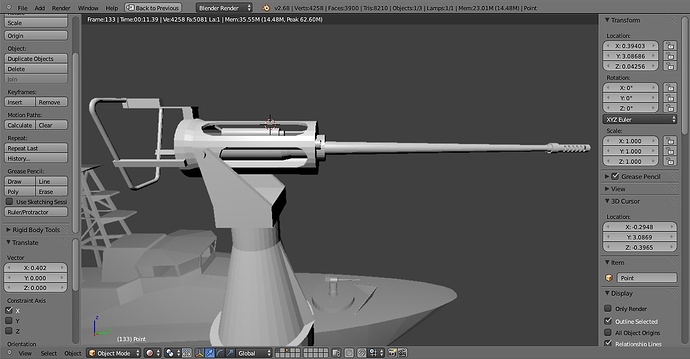 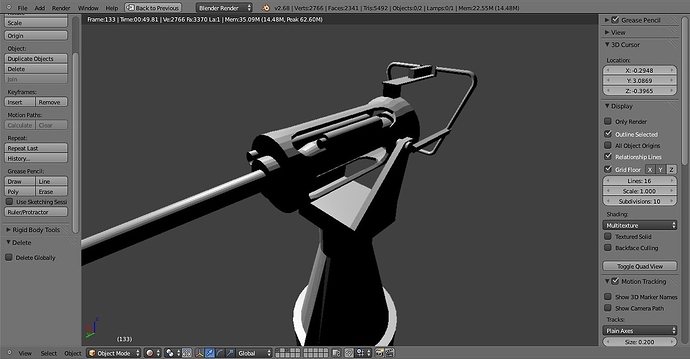 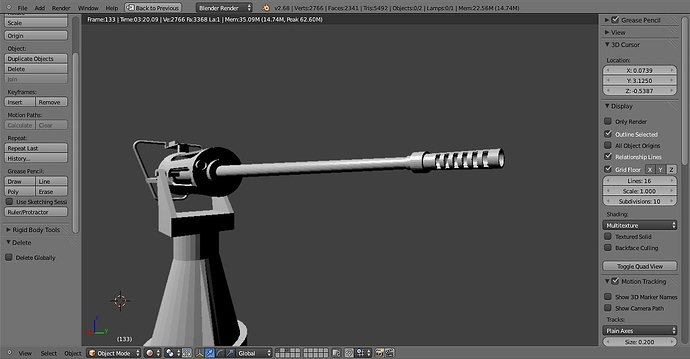 So, I guess all the easy stuff is done now. From here on out it’s going to be the weird shaped asymmetrical motor drive and receiver area of the gun, then the controls.

Wow! I’ve been forgetting to update this post for a while and I’ve made a lot of progress!

Luckily everyone else has been forgetting to read it anyway…

Ok, so… man, this is really old! Shortly after this I started working on the rear receiver/controls area of the gun that sort of fits in that frame at the back of the housing in the last shots I posted exactly 5ever ago. 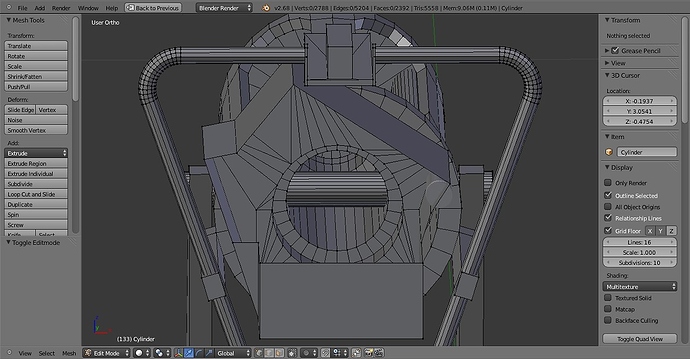 It’s a really weird shape but I wanted it to all be formed from one cube just for simplicity I guess. There wasn’t really any way to extrude out the shape (that I could think of) so I had to make it manually by extruding a single vertex from the simple cube shaped base forming a single edge and then extruding from that one, and so on, and so on until I slowly formed the shape manually. Then I had to go in and connect the extruded vertexes to the rest of the cube forming all of the triangles I needed to make a solid shape, and then faced one tri at a time? There’s probably a dozen much better ways of doing it but I’m not learning very fast haha. Oh and of course first I had to make a simple cube shape for the base of the receiver area of the gun. Delete the face closest the barrel assembly which is big and complex in it’s self then manually connect the cube shape to the cylinder shape so it would all be one piece. Again I didn’t want several different shapes that weren’t connected to each other.

So that was fun but it went surprisingly fast. 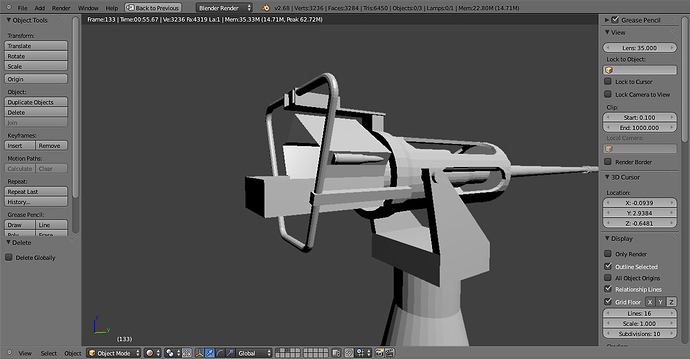 This image shows how I used the in game model of a 25mm round I had already created to make sure the receiver was the right length, approximately, since I can’t get blueprints to a current military weapons system. So much for the Freedom of Information Act I guess.

This is an overly simplified design. In actuality the receiver area of the gun isn’t a closed solid shape like this. It’s actually just two flat plates of steel, one at the front and one at the rear and otherwise open in between with a horrifying array of rollers and gears visible for feeding the chain of ammo. Just thinking of what I could see of it in the poor quality google image results of it induces shudders. So I just closed it up. No thanks. Not dealing with all of that. Especially not for a game model.

Good lord, I really dropped the ball on this thread.

It’s still not completely finished but here it is with (so far as I can tell) the receiver and controls part of the gun, uhhh… finished? 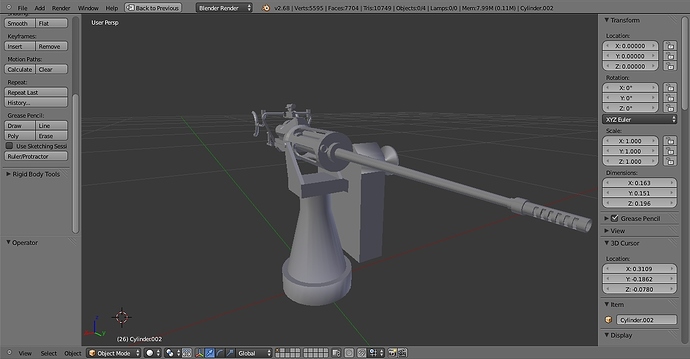 The most recent thing I’ve done is adding that ammo box on the left side. 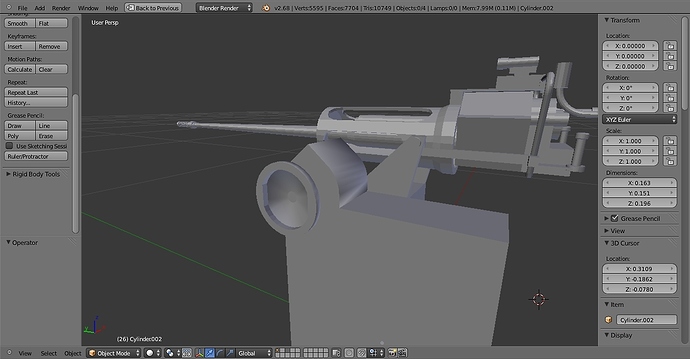 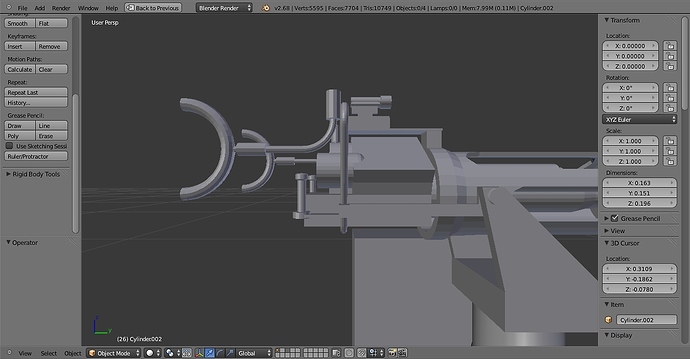 And here’s the receiver end of the gun I was last starting to work on before I pretty much forgot to post about it regularly in this thread entirely. It’s completely done now. I think. This happened in a number of stages, none of which were actually documented because I forgot to keep posting.
Ohhh, although what I can recall is that eventually I gave up on keeping everything connected in one continuous cube. The shoulder harness is not actually connected to the frame. The cylinder shapes at the back of the receiver (they’ll be textured as gauges) are not actually connected to it either. It was a really arduous task making this shape and toward the end I was just desperate to finish it so I over simplified the shape and left out lot of detail. I’m not entirely happy with it. And I just slapped cylinders in where I needed them and left them detached separate cubes.

But there it is and honestly, even though I kind of half assed the end, it’s way to complex for the game I think. It’s over 10,000 tris I think! 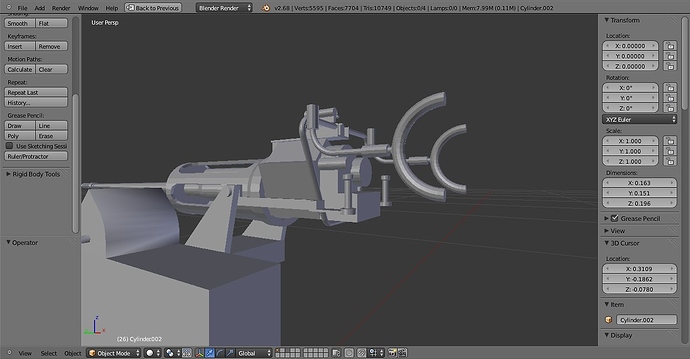 Left side of the receiver/controls 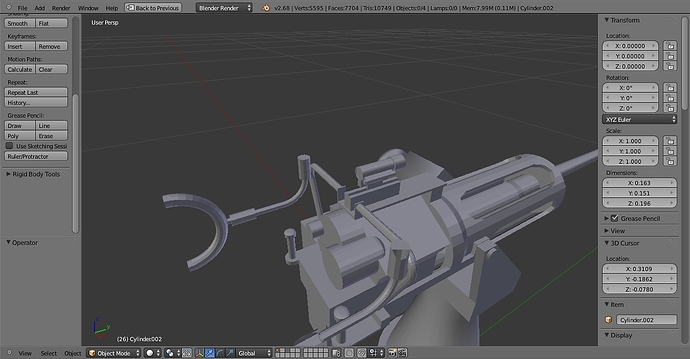 Here you can see the red dot optic sight mounted on top of the gun, I like that touch. 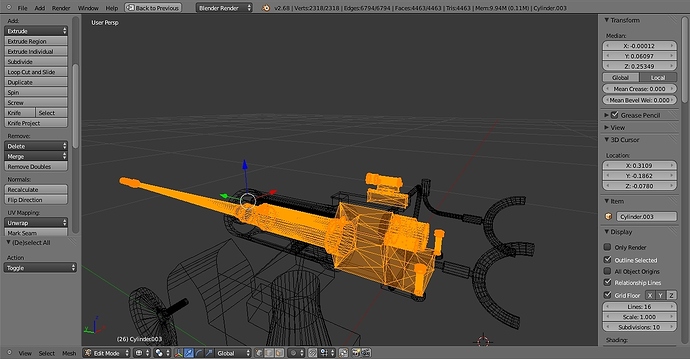 And lastly, what I like to call, “The Nightmare Within”.

I still have to add the chain guide that connects the top of the ammo box to the left side of the receiver. Then I need to add the electrical box on the right side of the gun. And that should be done as far as making the model goes. Then I can get started on having other people do the hard parts for me. Specifically setting up the physics. Again, this is for a game, so it not only needs to be able to move correctly, it needs to do so in a dynamic environment and be interactive while it’s at it!

That requires a lot of work I just can’t wrap my head around at this point.

So I’m going to have to have someone else set up the collision meshes, hinges, swivels etc. The funnel shaped base will be static, but the mount to which the gun, ammo box, and electrical will be connected needs to rotate 360*, then the gun mount it’s self needs to pivot vertically a certain amount that I don’t know how much it is.
The real pain I think is going to be getting the chain guide to move. One end needs to be “connected” to the ammo box and not move except rotating with it of course. The other end needs to be connected to the receiver of the gun and needs to adjust it’s angle to match the position of the gun as it’s pivoted up and down, and then the whole guide needs to flex like a chain between those two ends!

The most terrifying part of it all: unwrapping and texturing this already almost 11K tri monster! I can’t even imagine how it could be done, but I see people making a lot more complex models than this on this forum and texturing them so well they actually look photorealistic! So I’m sure I can recruit someone on here to do it for me. Actually I’ve already got a guy unwrapping a much, much, more simple model of a MK17 I made. I can’t even handle that one. But hopefully they can handle this too!

Does anyone have any feedback for me?