Googling »blender 2d-filter texture« I found an old Project from 2008 which was about enabling Builder to load a Custom Uniform Texture for Use in a 2d-Filter:
http://projects.blender.org/tracker/?func=detail&aid=18081&group_id=9&atid=127

The Author explains his Methos Step by Step in this Blog Post:
http://blenderecia.orgfree.com/index.php/blender/2d-filters-glsl-e-custom-textures/
This Blog Post also includes a Link to PasteAll which offers what I guess is the Source Code for this Patch.
However, this was long before 2.5/2.6 and of Blender Python and the different Versions I have less than little Clue, but I guess the old Source Code might have to be modified in Order to work now? Yeah, I admit, I have not yet tried it out, Shame on me.

Also, it seems the Download Link for the old Project’s particular Build on this old GraphicAll Page does not work anymore:

I actually find it hard to believe this hasn’t made it into Trunk: Using own Textures in 2d-Filters instead of just the three for Render, Luminance and Depth? That sounds very useful indeed!
So, could this Technique be translated to a more recent Blender Version?

(I was actually trying to achieve Perlin Noise within a 2d-Filter but not only haven’t I come very far, it also seems to be, well, not the fastest Technique when using multiple Layers of Simplex Noise, so using a mere Cloud Texture would surely be a Lot faster.)

I also think that this is a very interesting feature for the trunk. If Dalai Felinto implemented it, I also don’t undestand why this feature is not in trunk!
@C.A.ligári: did you finally tried to use that old patch?

The Harmony branch allows you to do this, however you need to use the new UI in the render panel. The Harmony builds on graphicall are a little old, but they should have that feature.

I didn’t know that – thank you very much! :}
Though how does the Setup work?
Either it is my ATI Mobility Radeon HD 4570 or I named something wrong, because all I get is this strange Result (left next to the 3D-View): 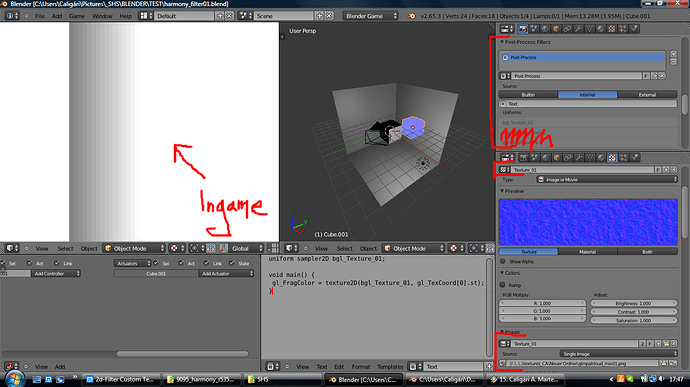 EDIT:
The Filter Code on the Screenshot is a Bit bad, but I just corrected it and the Result is the same.
Besides, neither do I get an Error-Message. (I did get one when I first tried to run the Filter over the usual Actuator instead of using the Render UI.)

The bgl prefix should only be used on built in uniforms. Remove it from your uniform name and the interface should be a bit more intuitive.

Thanks Kupoman! I’ll try it!