Is there a way of doing this? My only thought so far is to combine it with a shrinkwrap modifier somehow, but this is a bit sledge-hammer-to-crack-a-nut and - I’m not sure if it would even work - I think it would just flatten the softbody after is softbodies.

Thought I’d post here to get the best Blender minds around on this little problem.

I just experimented a little. I used a shrinkrap constraint (not the modifier). First it looked like it is working. But the Object (the Softbody) is collapsing in
all 3 Dimensions. I found no way to restrict that.
Then I tried to set a horizontal Gravity, but then it looked more like a wet Towel sliding down a Window or something.
Have you considered to create the Softbody effect manualy. With shapekeys? I thing that might work. You could even combine it with drivers to automate
the deformation.

What if you had an extruded version of the 2D object which has the soft body physics. Then the 2D version would use a mesh deform modifier targeting the physics-enabled version?

I have no idea if that would work. ATM I’m taking a break from housework, otherwise I’d try it out.

I tried a quick experiment too and it looks like it would work.
Following on from above there for each softbody there are 2 objects.

A 3D softbody {e.g. a sphere} on one layer.
This layer has the simulation and the objects interacting.

Only render the 2D layer! 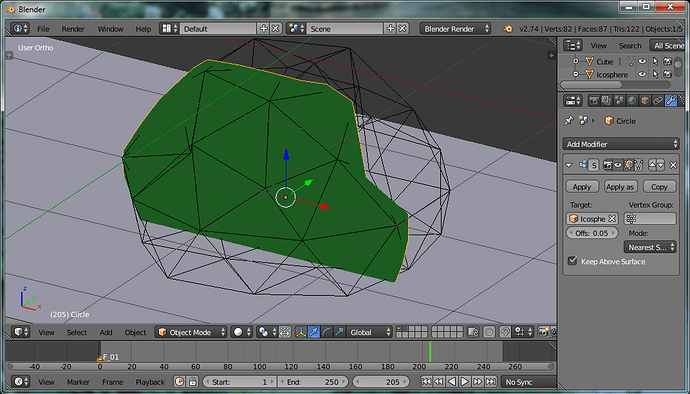 Wow, @Martin_Norris, that is a truly inspired solution! I love it!

There’s a few more things I’ll be trying out when I get a chance… (this is for a slowburner project) … which is to sandwich the softbody between two frictionless invisible collision cubes. Gravity will be off.

I’ll post some experiments in the next few days.