Hi All,
I may be having a challenge due to workflow… I created a second layer for my second scene.(in hindsight I guess they should be separate files using append files for the standards / re usable assets) Be that it may; I have noticed that if I want to change my sensor or in my second layer it affects my first layer. (Global that way)
I added a second camera to the second layer (so that layer could have it’s own camera / sensor) However after adding the camera to the layer, I hit 0 on the numpad to preview and it pulls up layer one’s setting and I see a camera in my camera’s view on the second layer! 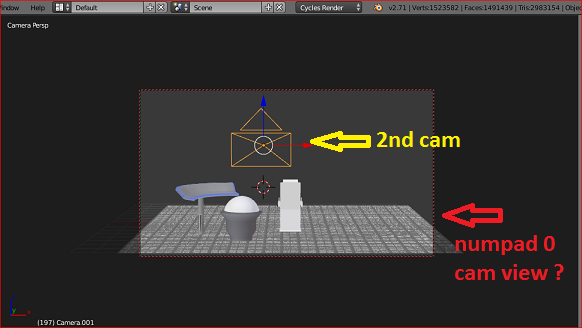 The numpad 0 will show the view of the camera that is marked as active.
To change the active camera, select the other camera and press ctrl numpad 0.
Note that even though the cameras can have different lenses, the sensor sizes and frame dimensions in pixels remain the same for all cameras.

Good to know about activating a second cam with CTRL thank you. Appreciate the tip on the sensor sizes. So I guess I will need to create another blend file and set up the sensor for a wide shot… Thanks