alright so im taking a shot at a car since ive seen so many great car threads lately…not much done yet but its enough i think i should get some advice… can u name this car?..if you can then i know im doing a decent job…any comments?

ps. this is my first project that i intend to take very seriously so just to let u know i will reply to all comments and take any suggestions into consideration so dont go light on the comments

Hmm… The hood looks almost like that of the new beetle. But I can tell it’s not that. Grr… I’m trying so hard to think of what it could be, but I can’t think of anything. The only things I could really go off of right now are the lights and the hood, and that’s assuming those are stock.

I’d say at this point I can’t figure out what it is. It’s looking pretty good, though.

Now I really want to know what it’s supposed to be. It’s bugging me.

suprise suprise, its the ferrari 360 (or modena) im not sure yet…
why did you also choose this car? Iv got nothing against it, but seriously i think that its done about 10 times allready…

Dont get me wrong i dont want to sound mean, just got bored to this car a while ago :o

though I dont know why it looks a bit weird, just like pizzadude said, like a new beetle… I think because the hood is too round…

I would have chosen another car though, but its your choice not mine, so keep up the good work

I would agree to the “too roundish” hood, maybe add some edge loops there to make it more sharp.

ps…please choose another colour in the end, will you? for me?

pizzadude: your right it wasnt a beetle, personally im not too fond of beetles and would not waste my time on one (sorry to all you beetle lovers out there)

Deadend: as for the reason i chose this car, its because ferrari is my favorite car manufacturer, ive loved every car that ever came off their line. the trick was trying to find a car that wasnt overly difficult as im not too familliar with modeling cars. i was going to do the enzo but as i got started i realised it was fairly difficult so i picked the 360 modena because it has alot of smooth curves and just looked over all like an easier car to start with. i was going to do the F430 (the newest ferrari) but then i found another thread somebody had for the same car that they are currently working on and personally, i dont think i could do nearly as good of a job as them.

Chop Suey : thank you, one of my main worries was that i wouldnt be going about the car the right way and ive seen your cars so if you think the modeling is alright i must be on the right track. as for the hood, i have been following blueprints quite closely and this is how it has turned out so i think it might be ok…mabey just the view. but i will take it into consideration and i will look at some different angles of the car and see what i need to do. also, the colours are just temporary, i thouhgt making it red might help people realise its a ferrari

reshaped the front end a little bit, its not too different from befor but its a little bit different. if you can see a difference tell me ehich one you like better. i have alsot decided to redo the door completly bacause as you can see from this angle there are some messed up areas along the edge

1: i made this line a little sharper to add more shape as i saw on a photo of the 360

2: raised this part, mine was too flat it needed a bit more of an arch above the headlights

3: messed up areas of the door that could not be seen from other angle (to be redone)

ok, after a research on pics from the f360 on the official ferrari website (which is impossible -.-) i googled pics…

I. there should be another vent
II. no edge there, plane shape
III. these messed up areas, you should seperate the door from the car body.

the edgeline for the airintake is a tricky one, the best way might be to add an edge loop at the top of the vent, then another one nearly under the first one and move it inwards towards the back.
if it’s not sharp enough add some more edge loops in this area, get what i mean? (hope so

i took this one for reference: http://www.gianpierobruno.com/img/sfondi/ferrari_modena.jpg
and painted a little in your pic 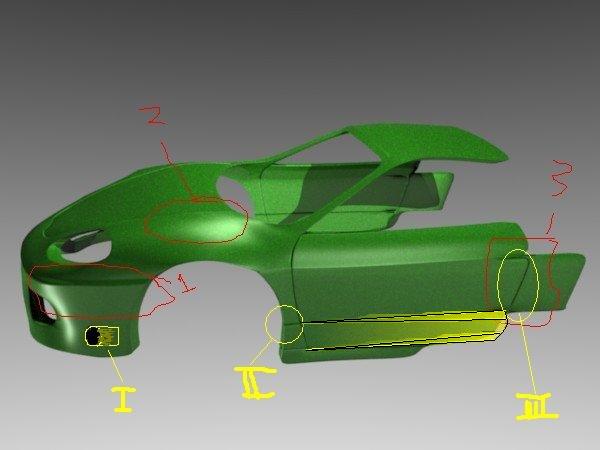 chop suey: first of all i would like to say thank you for taking such an interest in this project. 1: that vent, im aware of it being there and i have just left that hole there as a marker and when i get the entire body done i will go and add the right amount of depth to all of the air intakes (the front ones are not accurate either) 2: ok i never realised thos lines werent there, they arein the blue print for some reason consider them gone!

ok so im going to do the door next (redo the door) and im gunna do it as a seperate object as chop suey suggested. what im wondering is how will i connect them in the end and make it look as thouhg it is one object?

the doors? like you might have done it before…
1.model the frontside fender till the edge to the door
2.then extrude the edge a bit inwards
3.select this edge and the first and duplicate them
4.hide the rest of the body except the new verts
5.model the doors

sounds hard, but it’s pretty easy to do

if u want the doors aas a new object select the verts then n, i think, id check though

if u want the doors aas a new object select the verts then n, i think, id check though

i suppose at least i had the idea right

alright so i did a little work on the car, then i rendered and things looked fine, so i rendered a wireframe for ya for a bit of a change of pace…what do you think?

well after a short break i came back and finished the body…what d o u think…do u need a wire?

oh and how do u put the picture as a thumbnail so ppl dont need to wait for all these biggwer images to load if they dont wanna see them?

the bit between the intake and the door looks wrong…

did u subsurf it?

if so try for that bit set smooth, as subsurf round off corners

totalexodus : i did use subsurf and i do have set smooth turned on. and which intake are to talking about the one at the bottom or the one closer ot the window. if ur talking about the one at the bottom i dont know what u mean and i think it looks ok (the only spot that isnt smoothe is where the crease between the door and the body. Now the one by the windo there are a few edges that are too sharp and i have tried to fix but every time i try i make it look worse so i sort of gave up

any other comments ppl? im starting on the wheels next

I think he meant this:

Other than that, great model!