I’ll be looking out for that video for sure, you’ve just gained a new subscriber

So, of course I’m posting those basic instructions here this way because there is no time; and on this week I’ve already decided to start making and publishing the tutorials on the subject (Spline IK Bone Constraint for Facial Rig); I take like 1 day to make a tutorial.

So, making Spline IK Bone Constraint is far from something from another world; the bases are actually pretty simple; but the major issues imo are: 1) the lack of both theoretical and practical content; 2) and also the somewhat exhaustive technical details on the step by step; 3) additionally, many tools involved in Blender for this Rig setup have questionable Design in terms of efficiency and clarity —notably: Curve Objects are really challenging to deal with especially in the beggining, and I come from Polymodelling…; also, Hook Modifiers are overly confusing; finally, the process may involve lots of going back and forth on Modes in Blender, which is very energy & time consuming.

B-Bones Segments are very welcomed, because they sort of substitute the need for lots of Bones Subdivisions; The amount of Bones are important I guess, and B-Bones Segments help a lot too, but without a qualified (and well-thought) Subdivision of the Curve, the Spline IK Deformations are compromised.
This image shows 8 Hook Modifiers from the Origin of the Curve Object reaching towards Targeted Control Points of the Curve which from the Hook Modifier Targets each of the Controller Bones respectively. The Curve is Non-Cyclic (for this case because of the requirement of Top/Bot Eyelids’ Borders gapping, I found it works better; however, for the other Spline IK Rig case, the Eyes Surrounding, it was made Cyclic). 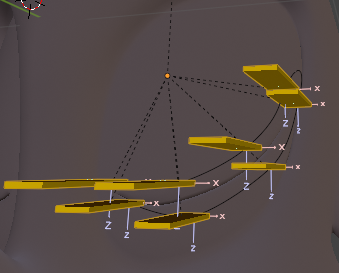 The Origin marks the Hook Modifiers’ lines; not to be confused with the Parenting lines of the Controller Bones to the Head Bone (not visible here, and which Tail goes upwards). The Red Bones are Deforming Bones, and they are 7 in number (one very tiny one at the outer corner), they control the Weight Paint of the entire Eyelids, and they have no Parenting whatsoever; they rely on Copy Rotation Bone Constraints (Targeting of one of the “following” Controller Bones considering the inverse counting [IK Chain]); the number of Controller Bones match the number of Control Points on the Curve Object; the number of Deforming Bones doesn’t need to match because of the problematic of Bone/Tail as spacial reference instead of just 1 by 1 thing. 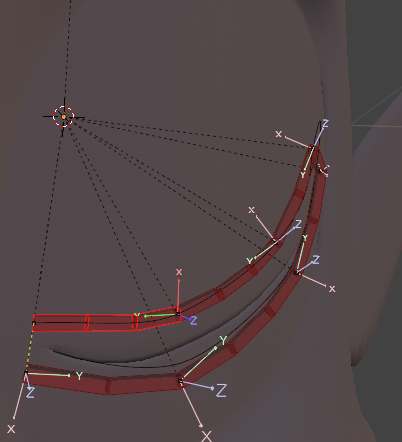 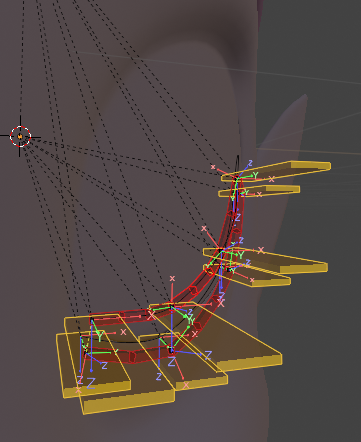 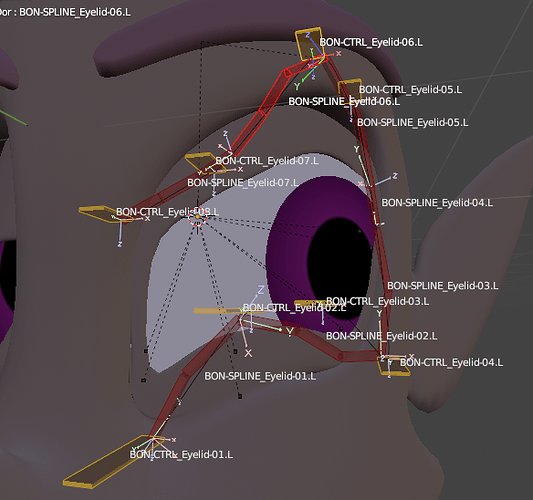 The Direction of the Curve is important in Spline IK Bone Constraint. The last Bone on the FK Chain (that is, as I understand, the Owner of the Spline IK Bone Constraint which is the first Bone on the IK Chain) should be at the ending goal of the Path in this approach at least. Curves can be Cyclic and closed on certain Spline IK Rigs; but Bones cannot (and anyways should avoid any kind of cyclic dependency). 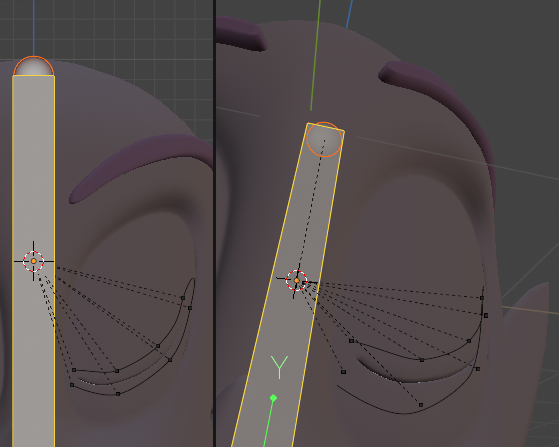 Developing or understanding the Curve Type, the Handlers and Handler Types, the Control Points, the Segments, the Splines for the Curve(s) on the Curve Object can be very tricky in Blender. There are a list of fundamentals that if you miss, will hinder all your worfklow in Spline IK Rig. Origin for Curve Objects should be fix as soon as possible, is of maximum priority. But this I’ll have to develop on tutorial for this specific case. Duplicating/Mirrorring or “Symmetrizing” Curve Objects or Curve stuff on Edit Mode is very complicated and time consuming. Mirror Modifiers don’t work directly on Curve Object unfortunately. Here the last updates on the Eyes Rig. 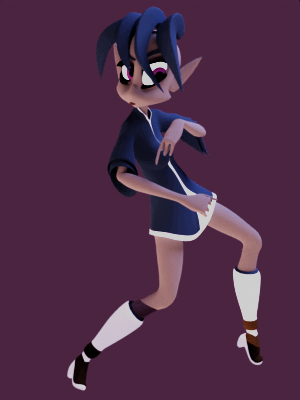 I was having loop dependencies involving Shrinkwrap feature (Modifier/Constraint/Bone Constraint), so I eventually found out that by Joining the Mesh Objects (Eyelashes and Body which contains the Eyelids) and by connecting the Vertices from those Mesh Islands it was equivalent to making lots of complicated Objects Modifiers setup.

Then had to retake the Weight Painting on the Deforming Eyelids Bones.

Some bonus fancy effects, when you go on Edit Mode for Custom Shape Mesh Objects and make Transformations there in realtime.

More testing and experimenting; by this time I had only 2 problems, one critic (Eyelashes needed to adapt “Rotation” or Deformation like butertfly wings, according to the up/down Posing of the Eyelids Controller Bones) and one simpler (the Controller Bones of the Eyelids required some invisible basis to float onto; that basis couldn’t be the Eyes Mesh, because this would generate a dependency loop: suppresses all the Modifiers until you get rid of it).

Although I’ve discovered Curve Objects also have Shape Keys of their own (which is quite intriguing), unfortunately the Tilting of the Splines on a Curve doesn’t help generating twisting Mesh Deformations (like Bone Rotations); so I had to find other alternatives. I didn’t test all hypothesis, because I decided just to go back to plain Shape Keys for the character Mesh Object, just for the Eyelashes; and it just works (it’s complex shape in motion, automated Deforming Bone Rotations just aren’t good enough for synchrony).

So, everything is already solved for these Eyes Rig —just need to complete the process for each Eyelash.
Next challenge will be the Mouth.