I Would like to share a small post here regarding some animation work made by me in Blender, it might not be what is expected when posting a thread on Blender Animations, but it is about using Blender for Character Animation nevertheless.
Recently, I got in touch with game development company PLAYIR through this very Blender Forum. They were seeking assistance from a 3D modeler / animator in order to test out 3D models on their new Cloud - Real Time Updates Game Engine they are currently developing.

I was a little reluctant to contact them as I did not feel my work was up to par, but decided to bite the bullet and give it a go.
In this particular case, I was using 3D characters that had already been created by them and imported them in Blender through .obj format. From there I started to test out Blender’s bone rigging / animation feature and assigned 10 separate animations for each character which in turn I exported in FBX format. Below are the actions assigned: 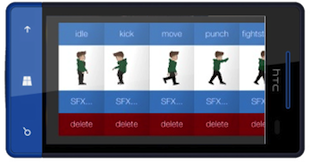 I am grateful for this experience as it has improved my animation skills on Blender greatly. They have used some of my work in events / conference and even on their crowd funding campaign where they demonstrate LIVE CHARACTERS ANIMATION in REAL TIME. (nice reference point for potential employers)