This is for an all-around cartoon parody I’m working on (sort of like Drawn Together). One of the characters is Spike Packrat, a 90s game hero with attitude.

This is just a test. Textures aren’t final, and the controls and animations are a bit wonky. I must point out that the low draw distance and small resolution are done on purpose, to help it look like a PS1 game.

Executable File (Let me know if it doesn’t work.):
https://drive.google.com/open?id=1C5uevTOGYwWnShA4pWzCv-Ps6gTg273L

Only executable file is available. The forum won’t let me upload the Blend file, for some reason.

UPDATE (Any more will be in new post. Link will be provided). New features include:

NOTE: As of this update, glitches include:

If anyone plays the newest version, please comment. Or do I look shady giving download links? I can’t promise I’ll be able to fix every problem people mention, but still…

FINAL UPDATE:
What?? The HUD doesn’t work?? Here’s the improved, fixed version in its new thread, and please forgive me for uploading something so broken before: 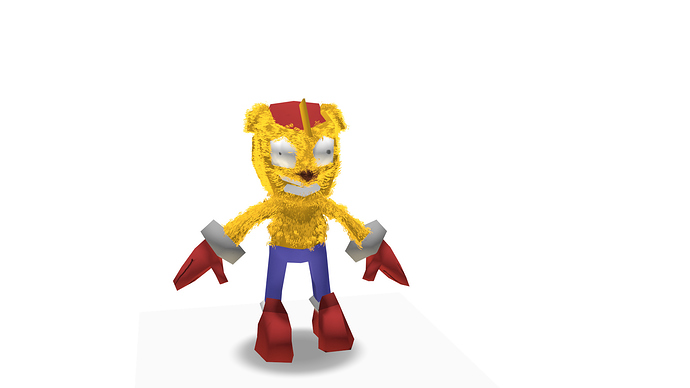 ORIGINAL THREAD: There’s a lot of details to 3D platformers I put into this game (many of which were broken, at first), but I have about 9/10 of the groundwork done. And to think, this was meant to be a small piece of promotion for this intended...

You posted the wrong video url. Here is what you meant to post:

Oops. Guess I rushed this post a bit. Thanks.

Um…does anyone know why I get an error message when I try to upload the newest version of the Blend file? It doesn’t matter if it’s the “quick reply”, or I’m editing the initial post. It just does. I even removed the original Blend file first, and it still didn’t work. Thanks.