I am experimenting with optimizing geometry for 3d printing.
Premise is pretty simple:
As additive manufacturing doesn’t work well with overhangs it’s usually suggested to have overhangs of no more than 45 degrees.
In blender we can detect an overhang if face normal is less than 45 degrees from negative z axis.
I have a vector of a negative z and a vector of a face normal.
I have their angle and I want to rotate the face to the nearest rotation of the face that would have exactly 45 degrees from negative z axis(thus removing the overhang by smallest possible change to face)
It’s probably trivial but my issue is that I don’t know how to tell
bpy.ops.transform.rotate to rotate along the axis that would rotate face directly to z axis.
My guess is that vector between negative z axis and my face normal could be somewhat used. ( Goal is to do the smallest possible rotation to be more than 45 degrees away from negative z)

This is my code that works only over faces rotated over x axis.

I guess proper behavior would be if bottom faces of ico sphere would be at least 45 degrees angle from the x_y plane after running this script. 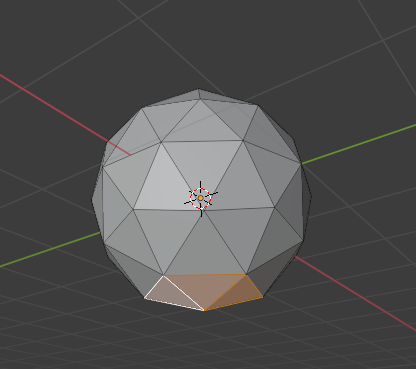 It has been some time… but did you find a way to automatically ‘fix’ overhang issues?
I was going to start looking into that myself…