Yes… I know. It looks like a poorly made tracking test. But it’s not!

During last weekend I had that thought: I can make my own 3d reconstruction system! And so I did. Though I used a little different approach.

), but tracking in my video was made using only 3 points. It was possible because their relative position was known. I think it can be described as “tracking based on object shape”.

Well… it isn’t perfects, but still works better than I expected. Still:

Looking forward to Your opinions.

Edit:
Of course I meant “3D reconstruction”, not tracking. Tracking data was from Blender Tracking System. I changed title accordingly.

I can think of some cases which this could be useful, but i don’t really know if enough to develop it further…

You might put the script as it is online somewhere, cause im curious how you made it

I will post it as soon as I will put it in a little bit friendlier form. Just don’t want to share my mess

lol. totally can understand that

Are three points really enough?
I mean a triangle with two known points in space still can represent 2 equal triangles in space. 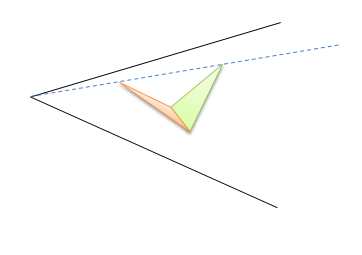 I think I understand what You mean. Till now I was testing by tracking “plane” from 3 points. I kind of went around problem by setting some boundries based on “plane normal”. I have to think about it a little bit more, but worst case scenerio I think there should be 2 solutions.

When I will find some free time this week I will clarify my code a little bit and share it for testing. Hope it will be worth looking into.