We are developing an online 3D Snowboard Customizer, where you can change the shape of your Board and choose between different base and topsheet designs. Which are directly applied on a 3D Model in your browser. The main structure is done so far. And now the software engineer is on the task for the design application.

I constructed all snowboard models in Rhinoceros CAD and I exported them as .obj files. Because we offer different shapes of noses and tails the snowboard model gets assembled online with three .obj parts: Nose - Core - Tail. (See Pictures: Main Red-Blue is the Front (Topsheet) and main green-yellow is the Back (Base), you see also the cut of the nose and tail and therefore the different .obj files)

Now that’s the task: The programmer told me, that he needs the texture coordinates (UV Mapping?!) of the .obj Snowboardmodels, so that he can apply the designs over the whole board.
I just managed to build the boards in CAD but I have no clue about texture mapping and also don’t know how to actually configure it that it works over all three different .Obj Parts. (Yes, I searched quite a while in the wild wild old Internet for clues, there are some advices and videos how to do stuff like that, BUT the Mac Version of Rhino has not the same functions as the windows on and is pretty poor in Texture / UV Mapping.

I thought in Blender this should be an easy task? I personally never used Blender, so that’s why I would need some help. I don’t know how much effort you need for this task, but since all the models are already modeled (in STEP, .OBJ or whatever you need) its really not a bid deal… i think?

Thank you guys
If you wanna see what kind of boards we design, build by hand and shred like crazy, go on FB for BBoard. 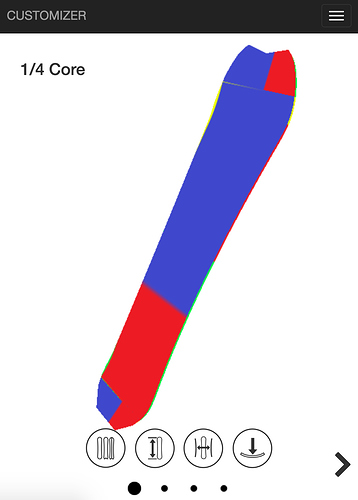 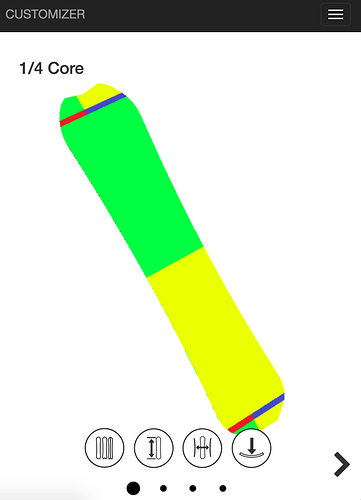 It really doesn’t need to take that much effort. Especially on a simple and somewhat flat object. If you ever decide to bring it into Blender as an obj file, to UV unwrap it is easy. Think of the object as an banana. When you peel the skin from the actual fruit, there are these things called seams. Each seam can be peeled off of the object just like a banana and separated. Of course, you will have choose where to make the seam. From the look of the object, it can be separated 3 or four ways. It can be separated from top, bottom, or you can choose to split or keep the sides as a whole.

Next, the UV parts have to be straightened out for exporting into the image editing software of your choosing. The best way to go is to export it as an EPS file. That way it can be opened up into any Adobe or Open Source image editing software. Once the editing is done, you can import it back into Blender as a TGA(Targa) Image file and apply it to the object with a material.

Now for the difficult part. Exporting it to your application. I do not know how well it’s going to be shown once its on the app. That part will be left to you. But all the other stuff is easy to those whose familiar with UV wrapping. I can do it if provided the files of the object and have the UV wrapping done in 1 hour. Send me an Personal message and I’ll check back here later on for your response.

seams simple, but you should provide the model so one can unwrap it properly for you.

Thank you guys for the support. Well I actually don’t know how the texture gets on the model online. But as you can see in the attached screenshot, he manages it somehow. Just the mapping is not equal over the whole board. Cool so lets try this.

I attached the files in two zips. One with the TwinTip Board which has the same nose and tail shapes. The other zip is for the Fishtailboard. There you have different shapes for tail and nose. By the way: One of these nose shapes somehow gets not modeled right. That’s why I added it as an STEP file.

Let me know if you need any information. 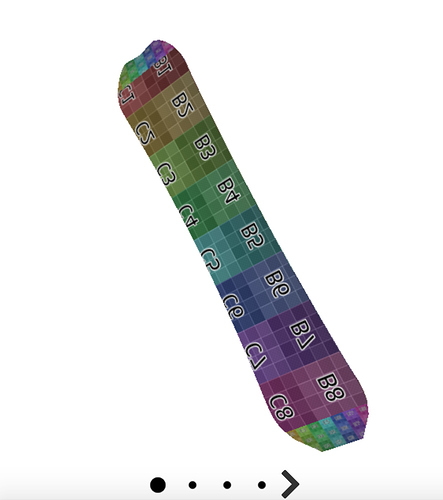 You will need to provide the texture template that you will be working from, that way the uv mapping can align with your template.

Hey guys.
So we are making progress with the 3D-customizer, but the problem with the correct mapping of the design(texture) on the snowboard model is still there. 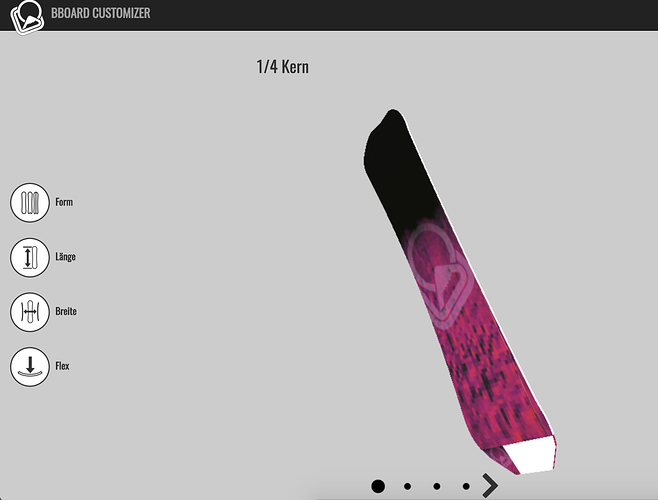 Here you see the problem: the Nose and Tail parts are merged together online depending on customers choosing. (There are around 15 different shapes and therefore a huge variety of combinations. Thats why we do it in this 3 part-model-way). Now the design should be mapped on the topsheet evenly over the hole board. On the other side (Base) there we would like to map a different “Base-Design”.
So my question now is:
Wouldn’t it be easier to just have all the possible combinations of the full snowboard models (Filsize of these models about 200 kb?) and then just load and map the full model without this 3 parts merging thing. The unwrapping would be a easy but time consuming work?

Wish you a good weekend 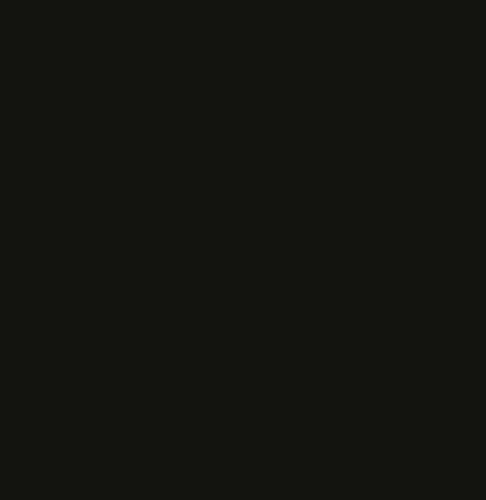 How many parts if them are all summed up ?

this should work i also remade the mesh sync it’s a mess…
https://www.dropbox.com/sh/qoumqvaqnaemgkq/AACwMvDq3eEMFhOWKDMD6azya?dl=0

If you still can’t figure this out find me on skype: josip.kladaric

@Kintaro: Haha… yes I already heard about my good job on the mesh of my .obj files…
If you can give me some advices about the .obj export settings for Rhino. I will make better meshed models.
This is the first, 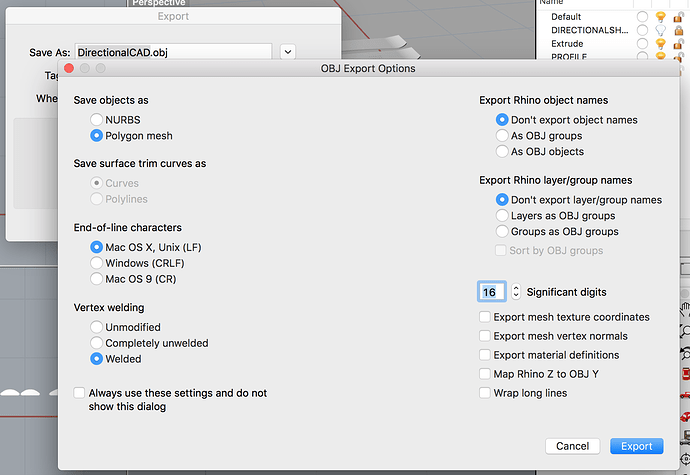 And this is second export screen. 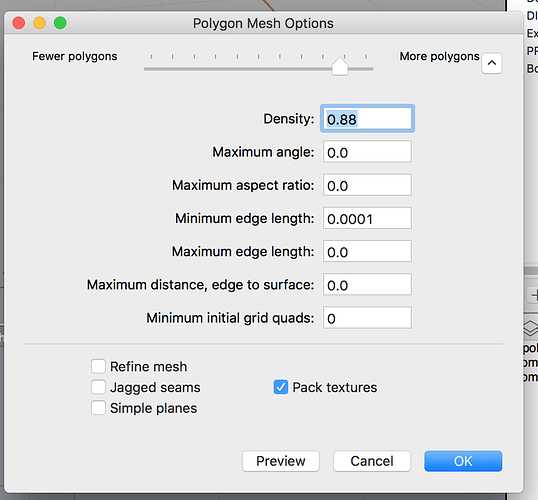 What kind of settings are important to get right?
Thank you for support.

Back to your work Kintaro: I think that’s what we are searching for. Nice! So it would be 44 different Snowboard models… Well let me the models get straight.

Do you guys think its smarter to have 44 mapped 3D-models, then having this 3part merging thing?
Thank you for the support.

I dont use Rhino so cant help you there. But it seems that the mesh is sculpted or when exporting it ads geometry that make it too hi poly for what you need. Can you post wire frame of that you got in Rhino before exporting ?
It’s possible that the option of density should be 0 ? and the bar set to Fewer polygons?

WHERE I CAN DOWNLOAD IT??plz, i tried in the whole page and i don’t found