Hey all, this is my first post on this website. I’m working on a 3d solar system that includes their orbital paths
All planets are accuratly scaled with their correct size ratios.
Scroll down to see images of the planets, I felt that I had too many images on this page and deleted the origional ones.

Here is a link to the tutorial I created on making planet’s orbital paths.

Here’s an image of the full solar system. 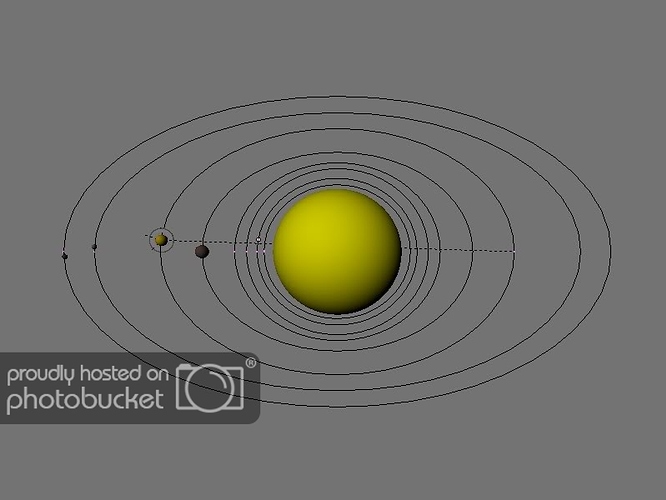 mmmm could add some sort of bump map to the planets, would download an actual star background for added realism apposed to the (IMO) cheap generator

Yeah, I actually redid all of the paths in a total of about 2 hours. So, they are fixed now… and also fixed the lighting (was using a sun instead of a lamp before). I don’t know what a bumpmap is. I’ll look into it. Thanks for the reply.

where did you get your planet’s images

did you set up a camera fly by for the planet to make a small video ?

can you load up a sample file for the planets rigging wihtout the map for the planet just simple sphere !
would be nice for other peoples who would like to try it

Redid Saturn’s rings. You can see two of the moons that I added (No bump maps on them yet). Titan and Tethys.

RickyBlender, my images come from here . (Have two layers of textures on most planets, normal map and a “Blend” texture to give it some color.)

And what do you mean by a ‘sample file for the planets rigging’?

i mean do you intend to share your file
or can you explain how you built the scene
is there any animation for this or only fixed in space?

It’s all fully animated. Their orbital paths and currently working on moons for each planet. And as for sharing the file… I don’t know, this is one of my first real projects in Blender.
The orbit times are accuratly scaled… Except for Neptune. A path object does not allow me to have a path length of 60,200. (Just set it to the max allowable length, 32,767). Working on bumpmaps now, we’ll see how it turns out.

Here is a link to a video that I made showing orbital paths.

but can you explain a little how you set up the planet to do the animation!
if you have some moon going around a planet there must be a way to do that

Sure thing, sometime within the next few days I will post a tutorial on Youtube to show how to set up planet animations.

Alright, I have posted a tutorial on planet orbit paths. It is located here.
Might as well use this comment to show the new planet textures/bump maps as well.