hi,
I started modifying wazou’s pie menus a few weeks back, it’s been a long road but here I present you with:

What’s different? :
New activation system based on work by Chromoly from his excellent ctools:
“Individual Menu Activation”: Activate the addon first, then press the drop down “Addons Preferences Menu” for individual pie menu activation. This allows the user to choose only the menus they like & not use the ones that conflict with other favorites.

Discovered this by accident in a buildbot build the other day. It makes life so much easier. One thing missing is use_occlude_geometry in the shift-z menu.

Ok so you took the normal parts of the addon to include it to the official.
Like that the official pie menus are complete, good work.

@pitiwazou, yes, I took the 3d view menus from your pies then wrote the official pies on top, also added some context sensitive fixes & reordered some menus, some hotkeys were changed to match official & I hope you like them.
@jandress thanks, I’ll keep that in mind for the next round of small updates.
Enjoy.

And other tools I have in my pie but it’s nice for the official, good job

Yes, your organisation and streamlining process for addons is really great meta-androcto

The best would be that you and the original author work both on the version commited to the official Blender repo, to ensure we always get the latest version and only one version installed. 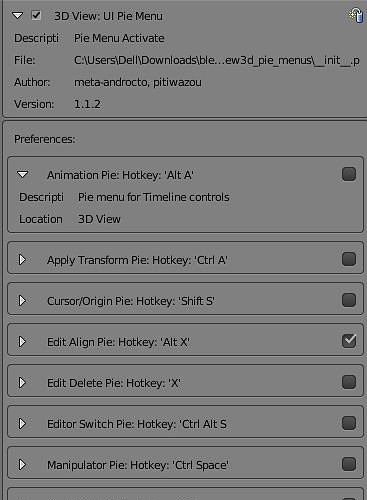 Dumb question: So you’re saying this is going to go into trunk?

Thanks for the editor type update. Since I use many multiple buildbot versions of blender on multiple OSes x multiple computers and each uses its own config directory this addon has saved me a lot of customizing work.

Just curious, it there a reason the 5 entry transform orientation is a standard menu when the 5 entry Pivot menu is a pie?

Safteyman, most likely.
jandress, by design, multiple people worked on this & some menu styles may vary slightly.

Thanks for being able to pick which pies to activate, would be nice to be able to change hotkeys though, or a way to use sticky keys, press ´a´ to select/deselect all, hold ´a´ for pie menu.

BrilliantApe, hi,
The activation method should allow editing of keys in the user prefs input i think. I don’t mess with changing hotkeys myself. most of the hotkeys used in the pies are duplicate of menus already in Blender. I’ve seen an addon with sticky keys, Imaginer’s advanced ui menus iirc

The issue with sticky keys & pies is, pies are very fast & a quick gesture from memory once you use all the time, adding in a pause before that slows things down considerably.

I hope you enjoy the pies.

Would it be possible to get an image of the pies? I’m using Pitiwazou’s, and I like being able to turn them on one by one, but would like to see the differences.

link to wiki page with images in first post.
there’s quite a few changes to wazous pies both internally & visually

did you see my own work?

BPR yes saw your bge menu, not really same thing as these.

This is really well done, and the perfect enhancement of the default pies. Big thanks to everybody involved. If I could make a request, I would really appreciate two extra options added to the “Selection Pie” in Edit Mode that I use a great deal, and which are not bound to hotkeys by default (and I feel like I’m genuinely running out of accessible key combinations for more hotkeys, thus my appreciation for these pies). The options I would like to see added are “Select Boundary Loop” and “Select Side of Active”. You could even tuck them away into a sub menu if you wanted (such as the “Select Pie”->“More” submenu from Object Mode). On another note, I too am curious (as mentioned by BrilliantApe) if it’s possible to use both the “Select Pie” with the A-key held and keep the default behaviour of the A-key “(De)Select All” when tapped?..I know it just involves an up-gesture with the pie but it’s such an ingrained behaviour now to simply tap A? If not, no worries - time and practice should sort it.

Also, I’m with Pitiwazou on direct subcomponent selection (Vert/Edge/Face) without having to go into a sub-menu. Now, I always rebind those to 1,2, and 3 respectively anyway, but I can see that doing it through a pie could be nearly is fast if done in a direct manner. Surely this is the single most-important operation to be able to perform quickly in Blender?

Anyhow, this is definitely taking pies in the right direction.

+1 for the component selection.