i recently saw a 3d motion controller from 3dconnesxion in a 3d magazine.

i checked it out, and saw that blender was not under the currently supported applications

, however, they offer a free SDK.

i was wondering, i fanyone knew about it, and/or if anyone has considered making one/made one for blender.

i would like to do it myself, but because of my lack of driver/interface programming i cant:(

currently there’s no plugin for blender.

I saw that someone was working on it based on the Maya spaceball support. I made a feature request for this some time ago. I have a spaceball 3003 I use for 3D CAD. It would be wonderful if it worked with blender. It greatly enhances ergonomics and speeds up workflow.

@jazzroy, i know its (actually) a six axis input device, i just called it a motion controller since it controlls the motion of the navigation (view, zoom, and such. also the space pilot has 21+ costumizable buttons (really neat)

but yeah, it would be great if this thing could be used in blender, it would help me out a lot

guess i either have to learn to program drivers, or wait…

well if anyone wants to add their input, be my guest:)

Review: Can a $59, six-degrees-of-freedom controller be useful beyond niche applications? We play with the new SpaceNavigator to find out.


here is a review of the new space navigator. 59$ tempting… I think that I read there was a patch? will it work with this? oh yeah here it is 3688. Now all I need to do is buy one and learn to put the patch in!https://projects.blender.org/tracker/index.php?func=detail&aid=3688&group_id=9&atid=127

Anyone done this yet? Looks cool! 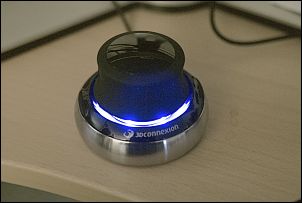 Just got this hoping to get it working in Blender. Anyone have tips. Just made my first build of Blender last night now I am trying to learn to add patches. Any tips. Anyone successfully patch the spaceball patch???

hey thanks ran the patch… Didn’t work fully and the build failed. Looks like the patch will need work. I haven’t programed in almost 15 years… But I will to dive in and try and get this patch to work again. Or is it the ghost that is getting refactored. When is that going to happen… Who do I contact for help?

The patch looks old. It is likely that it has been broken by the changes made to the cvs. You could post about this issue at the developer forum (http://blender.org/forum/).

thanks for all the responses , i didnt think anyone would be interested in this, but i guess (and i am very happy about it) that i was wrong

this will be fun:)

now i need to just order it and then i can start testing , woot!

Just got mine and havent got it working… But was willing to part with the 59$ to try. I have been playing with it and wow its great. There is a 3d puzzle game you know the kind with cubic wooden blocks that you have to figure out how to put it together. And the 3d controller works amazing well in 3d space. I think that it will be awesome to us it and the tablet for scuplting.

ok, ordered it 2 days ago and today it was shipped:

hurray, now i just have to wait, once it arrives i can also get started in getting it to work with blender! WOOT!

i am happy for you… really hoping to get mine working with blender. I am having a hard time build blender from cvs. i keep getting errors. I migth try the scons method. Patch blender hasnt been easy maybe we can convince someone to make a build that is working for them with space ball support.

Yeah!!! thanks guys. Here is a link of a build for with space ball support works with my space navigator
http://lecocqguillaume.chez-alice.fr/www/temp/blender_ndof_test.zip

that is awesome! hurray, everyone rejoyce!

nice work btw, thanks to you ibkanat 3d connexion motion controller can be used in blender!

(well, idk if you solved it or if you found a build of blender that has support…nvm seem the later is the case…'nyway) thanks for finding that build and sharing it with us:)

now i must only wait till it arrives in my mailbox and im set!

woot, thank you once again

Sure I havnt done much yet just asked around. Thanks to lguillaume and jms. For the build. Hopefully 3dconnexion will offically support blender would be nice.

im sure u have done amazing work and such (also thanks for the motion capture thingy, i didnt notice it was you until like 3hrs ago when i looked around and i was like, ibkanat…i read that before) but yeah

i dont know if my previous comment was insulting or not or if it came out as if i said u dont do anything (which i dont mean!)

hmm, but yeah, thanks again for finding and sharing this build:)

btw, i also hope that 3dconnexion releases an official support for blender, i send them like 5 emails about it, but none were returned so i dont know whats going on with them.

I have used 3DConnexion products in the past (tho not with Blender) and it is truly revolutionary for 3D work. Forget about using 3D CAD (like SolidWorks) without such a controller! Its great to see they have such an affordable model (altho I don’t like the non-commercial usage liscense) as this could be a huge benefit to blenderers!