Yeah, I know…another Earth Render…
This is part of an animation I am working on. I just decided to do a huge render.
I am using a 20k texture from NASA and also a 20K cloud texture I made from NASA images.
Rendered with Cyces.
4 separate spheres 3 scenes. The color and cloud sphere are rendered in scene 1, on separate render layers. I could have rendered them in one layer, but I wanted more control in post processing.
The lights are rendered in scene 2. I used the night light image to drive the fac of a mix shader that had an emission and a holdout shader plugged in. The holdout shader made it so only the side facing the camera would render and it rendered fairly quick compared to the color and cloud spheres. About 1/8th of the time, maybe less.
The scene 3 had just a plain sphere with just a diffuse shader as a material. I used that image to drive the fac of a color mix node set in screen mode to place the lights only on the dark side.
By linking the spheres across scenes and parenting them all to an empty, I can easily animate the planet. 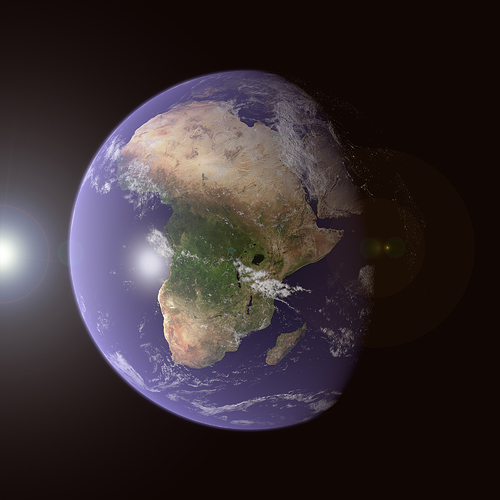