I wanted to post this here just in case I’ve overlooked something and see if anyone has any feedback for what I’ve done already.

I’m in the middle of building a 74 Guns 3rd rate Ship of the Line. I’m not aiming to create a like-for-like replicate of a real ship, I wanted something passable cos I want to create an animated project with it when I’m finished. If anyone is interested, I might post the details for that down the line.

I had finished the quarter galleries but I had received feedback from elsewhere saying I should redo them so I’m in the process of rebuilding that (that’s why it looks incomplete!) Otherwise, I’m fairly happy with my current progress.

There are historical inaccuracies that I’m aware of (the wale being the biggest complaint atm), but it hides the seam between the keel and the hull and it’ll be underwater so I’m not too worired about remedying that.

When I’ve finished the Quarter Galleries, unless there’s specific problems that require my attention, I want to try and move on with the top-side and finish off what needs doing on deck. Then finish off the gun-ports (square them out using frames potentially). The masts and the rigging I want to tackle last cos I fear they’ll be the hardest part. 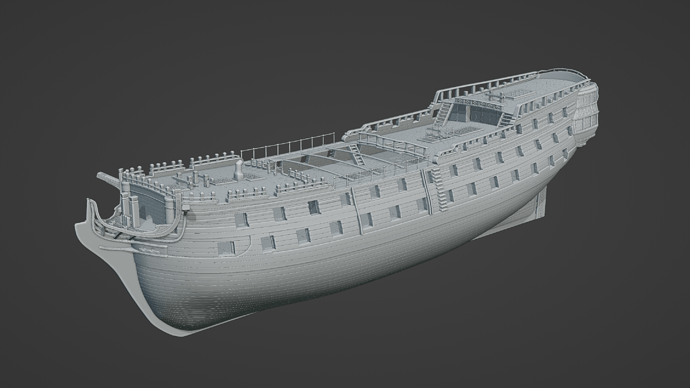 I like to see another ship here on this forum, fore I build one too here in WiP section.
https://blenderartists.org/t/uss-bonhomme-richard-1765/
Yours is in more developed stage and I can see 3 problems (i don’t know whether you meant it the way)

Good luck tho, and I will be gladly checking out this thread again.

I’m interested in this thread too, but I can’t make out much detail on your model. The next time you post images, could you change the lighting or maybe add some ambient occlusion to the material?

I’m interested in this thread too, but I can’t make out much detail on your model. The next time you post images, could you change the lighting or maybe add some ambient occlusion to the material?

Yeah you’re right. I haven’t set up any materials though so I’ll just stick to using OpenGL render for future images until I get around to texturising. I’ve retaken the same shots with this in mind so I’m hoping you can see moe of the detail. The cannon holes I’m gonna sort out a little down the line.

do you have some official old documents describing the specs for these ships
and from what dates did these exist ?

what was the advantages compared to the older Galleons ?

what was the advantages compared to the older Galleons ?

I’m no historian, but my understanding is Ship of the Lines were essentially a progression of Galleons. For their specific benefits, you may need to look up the differences between them.

do you have some official old documents describing the specs for these ships and from what dates did these exist ?

No, I wouldn’t mind some official documents myself tbh.

i ask cause it would complement the ship history and make it more interesting!

i’m certain you can find some old UK or Spanish docu on these ships
from 17 or 16 century
giving all kind of physical details for the design
and make your model even better and more realist.

What i meant was that I believe that the shape is rotated too much in the front.
But what I really like to see is what I marked with green (that bending) err11658×872 294 KB
And this is maybe just me but I believe this should be more visible (red is optional not all frigates had it) but the green line signals to me that the down side should be more “ball” rounded, which I believe it is (according to front view) but its not visible from the shading from rear view.

Here’s an earlier image of the rear of the vessel: I suspect it looks a lot closer to your yellow (and red) lines and it does look okay, but after deliberation with ship modellers I decided to smooth it all out so that it flares into the hull smoothly. I think the top half (of your red line) could probably be done, but the yellow will need significant tweaking to look righ with heavy adjustments.I’m not sure if it’s necessary.

Here’s a Matcap image of the rear of the hull as she is now, it is curved: And a wireframe (with subsurf for the keel disabled): Yeah, they’re supposed to be quite good books the Anatomy of the Ships, but I can’t find them for less than £20 (and even that’s often a stretch). I’m on an extremely tight budget these days unfortunately so I’m making do with what I have.

I have managed to source copies of the ‘The Seventy-Four Gun Ship’ by Jean Boudriot though, they’ve been extremely helpful for this project so far!

For the ship I’m actually building; I’ve redeveloped the rear Quarter Galleries and started added the fencelines. I’m hoping to start adding the decorative elements and finish off the poop deck, then move on to the various stairways,the side of the vessel and then maybe add decorative elements to both the front and the back.

I’m thinking of naming her HMS Siren - I want to add a mermaid to the front of the vessel but that’s chained up. The idea behind that being the siren is calling enemies to their deaths, but the king has somehow captured and tamed her. That’s a short animated film project in itself haha! How about naming her HMS Pandemic?

Think I’ll pass on that one. Enough reminders of the pandemic out there already lol

After utiliting some shrinkwrap trickery and retopoology, I’ve managed to square off the gun ports to an acceptable level. I’ve also edited the quarter galleries a little bit more. Fresh wireframe is available here (though I’ve not disabled subsurf on anything - rigging all the modifiers is high priority now cos I’m at 1.7 mil vertices!) I’m hoping to do a bit more work on the Quarter Galleries this weekend, but it’ll just be tweaking at this point. I wanna move on to the rest of the ship.

Minor update:
I’ve now rigged all the modifiers for easy control. Here’s the latest wireframe with subsurf off: Does anyone know where I can find them for the following items?:

I have reference images for all of the above, but specifically I’d like to have the measurements if they’re available.

I like this new update. Just a question because it strikes to my eyes. Is there a reason in particular why this mesh is not like this? It’s to do with way-back-when I first started the project. I started off modelling based off of a ship modelling kit. Screenshot below. When I joined everything together, it created that shape and topology. I’ve battled with the idea of correcting it ever since, but when the subsurf is on it looks fine. Looking at paintings and models, it seems to be right because they tend to bulge in the middle so in the end I left it like that.

depends if you want to show the outside planking or just the general shape?

I know it’s only been a couple of days but there’s been some significant progress.

On the whole, I’m very pleased with the general look of the ship now, it’s starting to feel like a proper 74 Ship of the Line. I need to finish off the ports themselves, the decorative roof gets in the way of the rope in some places. I was hoping to simply do a mirror onto the starboard but the way I’ve set it up it doesn’t seem to work (might try it again tomorrow when I’ve slept and refreshed).

I’m still looking for blueprints for the above. Any help for the following items would be appreciated!

I’m not sure what you mean by ‘show the outside planking.’ It’ll be uvmapped and textured eventually, I’m hoping to get the planking to follow the curves of the topoology. That’s the therory anyway