Hi I am having some trouble with the wing of a Boeing 747-400. The thing is that I would like to create all the movable flaps, slats, ailerons, and spoilers on the wing. The thing is that I would like to have the wing curved in such a way that it has an airfoil, kind of tear drop shape. In other words I do not want to have a flat wing. I used to create wings from the root and extrude outward slowly tapering it. The root is the section of the wing that is joined to the fuselage, body of the airplane, but after creating some knife cuts that gets messy fast… So I think I could try to build it from the top to bottom, I saw that method over at cg artists or some other site.

Here are some screens:
this main part is totally flat. the holes and those other lines in the image are going to be the movable parts of the wing

This is the same but in edit mode:

And finally the REAL movable parts:

Any C&C is greatly appreciated, thank you Did you try using a Lattice Modifier?

When I model the wings, firstly I make the entire wing and then cut the panels and moving parts. So, model the wing with its profile, I make the airfoil profile first, then extrude the whole span and adjust profile on the tip. Also it’s important to set the wing (the dihedral angle, angle of attack of the wing) and make it nicely blend into fuselage (if it does). And then cut all the flaps, spoilers, ailerons, trim surfaces etc. If you have enough sections on the wing (loopcut the plane where the ribs are, this is useful for details on canvas covered aircraft and eases the painting of rivets) it won’t be that messy.

Thanks for the help guys say how would I create the lattice modifier? About the method of extruding the profile, the parts will cut out by using the knife command right?

Knife works good. Go into top view, wireframe, so you select both surfaces and cut. You probably may need to clean few tris, but it’s nothing hard. then detach the flaps/airelons with Y. Don’t forget to add the space in the wing and refining the moveable parts after filling holes.

Add lattice object, scale (in object mode) it to fit the dimensions of the wing mesh. Select the wing, go into edit buttons and in Modifiers tab find Lattice. Fill the needed field (ob, or what is there) with the name of lattice object and it’s done. Select lattice add desired resolution go into edit mode and move the verts to bend your wing.

Cad2Blender,
There is a description in the wiki manual: Lattice Modifier. On a second thought however, I’m not sure that is what you should be using if CAD precision is what you are looking for. Myn.pheos’ advices above make more sense.

The lattice is a good trick to bend wing, even if you want very accurate model. Although you cannot set it precisely as in some CAD software, if can be tweaked until the deformation is right. I use it also, it’s really comfortable way how to make a wing. The cutting in Blender works nicely, with correctly placed edgeloops it is even easier.

Check out some of threads of mrys if you haven’t done so. Also I’m posting a screen of my Dragon Rapide, as you can see, the room isn’t always needed. 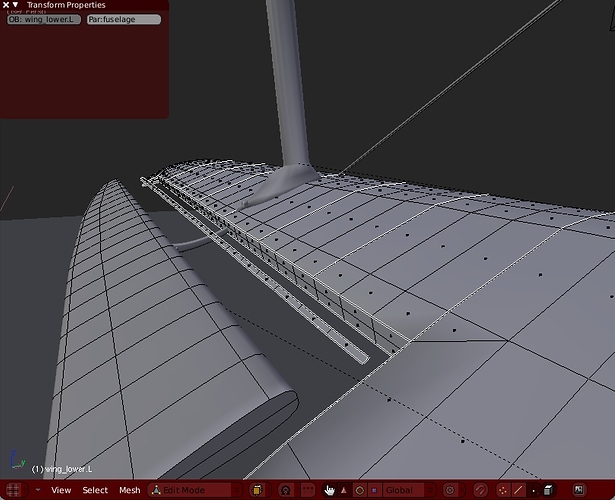