I saw this video that presents the nvidia jetson nano development kit, in the video it shows how they turn examples based on cuda, on linux, since it is based on the arm processor, do you think it is possible to run blender 2.80 ??

As long as it support OpenGL 3.3 (and it should cause there is Maxwell GPU) it should be possible to run Blender.

Eg. can blender run on arm: 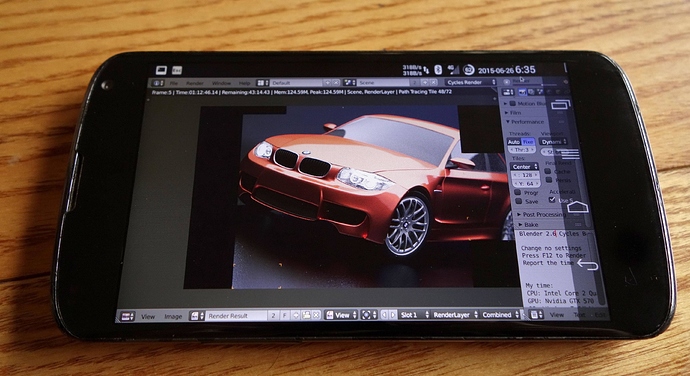 so if this thing has proper drivers it should be possible to run blender 2.8 on it.

I’ll wait for more information to come out on the net … if it turns and if eevee runs discreetly, maybe I buy it

@DeepBlender can i ask you if you have any opinions about it?

i wouldn’t expect any wonders from it. for $99 you will get $99 worth of computing power.

It is a very interesting device!

Judging its capabilities in the context of Blender is very difficult. Realistically, the question is not whether it is great, but whether it is good enough to be usable.
The machine learning models were most likely heavily tweaked for this device. It is very impressive, that’s for sure. There will definitely be people who try it out with models which were not made for this sort of device and I am curious to see what they are going to report.

I have my doubts that it is good enough for Blender and Cycles. On the machine learning side, it is also highly likely that it doesn’t perform very well on models which were not heavily tweaked for this sort of device.

sure, of course …
but my reasoning is this … with a $100 GPU what do we pull out?
and with this little monster?

I am convinced that from this singleboard computer a beautiful community will be born full of interesting small projects.

I totally agree, it is just unlikely to be broadly usable for the Blender community.

the fact that it is modular …
I would not be surprised if in the near future popped up versions with 4-5 slots that could work in parallel to that point the question would be really different … I’m just speculating …
if I’m not mistaken these modules could be the same as those presented for the servers … the purpose were applications for the cloud gamig for example … but Google Stadia has chosen Amd, for a probable economic advantage …
the game is not yet closed … nvidia wants to conquer the makers market and make it grow …

yes, but the selling point of this thing is that it is small. good for robotics… what’s the advantage for blender? current or upcoming $99 graphics cards will be as fast.

the difference is that you have a whole operating machine instead of a single component, a new working position. for only 99 dollars

I agree with Amon. I could use an extra Blender modelling workstation while the main computer renders a video. I was thinking of getting a good gaming laptop but it cost at least $1000 rather than barely noticeable £99. Plus this device is silent.

Hould Your horses guys.
It would be interesting to see if it could possibly run Blender, but nothing beyond that.
Just look at specs:
Quad ARM A57 @ 1.43Ghz - meh
It have 128 cuda cores - eg. 10 times lower than gtx1060 (and only 2 times cheaper).
Unextendable 4GB RAM - ridiculously low

Performance in Blender would be poor and it barely have any ram to load anything.
Its meant for machine learning, not a workstation replacement.

Only if you buy this for other purpose and blender is only by the way. And i doubt it would be usable.

edt:
I found a better video, which explains better the potentials of this hardware … and actually in these perspectives , deep neural network is fascinating