A Campfire I Made in Blender 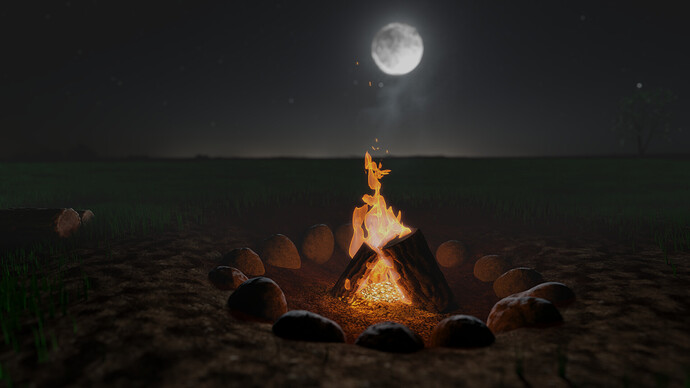 This is a campfire scene that I just finished using Blender 2.91 and Davinci Resolve. The modeling, texturing, shading, lighting, rendering and compositing was done in Blender and I added a motion blur effect and sound effects with Davinci Resolve.

The moon is a photo that I took myself dropped into the scene as a plane and tracked to the camera.

The ground is a plane with a displace modifier and a mixture of image textures and procedurally generated shaders, with a particle system instancing some simple grass blade models. (If I had known about the fancy new ‘geometry node’ feature I would have used it!)
I also did some texture painting in the firepit to add in part of the ashes.

There are two different meshes for coals and ashes.The coals were done with a procedurally generated shader. The parameters in the nodes can be animated to make the coals flicker or fade in and out, and I did achieve that effect to some degree but should have made it much faster, as currently it is not noticeable and broken by the way I had to loop the render in Resolve. (I only rendered 250 frames!)

The logs are simple cylinders with plenty of geometry and loop cuts where they were needed. I unwrapped them, found a good log texture and used GIMP to create normal maps and displacement maps for shading and adding detail to the mesh.

There are two animated lights illuminating the bonfire, along with the fire and ashes which also emit a small amount of light into the scene. Additionally, I added a sun lamp pointing towards the camera to match the lighting of the HDRI and boost the hard lighting (see the backlighting effect on the rocks and the logs on the left).

The fire was made in Mantaflow which is now built into Blender. The resolution divisions are at 200 with noise divisions set to 2 and a ton of the other settings tweaked to my liking. There is also a force field set to ‘turbulence’ influencing the fire. I used vertex groups on the logs to control where they were burning as well as a clouds texture with an animated offset.

The sparks are a simple particle system instancing a low poly icosphere with an emission node with a blackbody node driving the color. I enabled the built-in Cycles motion blur for the sparks only, since volumes (fire and smoke) do not seem to work with it.

The rocks are generated using the built in rock addon, and their materials are procedural.

The tree on the right side of the image was done with the built in tree generator addon.

The sky is an HDR image that I found on HDRI Haven. I placed the moon over the original moon in the HDR so I could scale it up and achieve a more mystical look.

I sorted all of these assets into separate render layers so I could selectively apply effects to certain aspects of the image.

The fire layer got a simple glow effect using some blur nodes.
The sparks layer got that too, but differently.

The environment layer got some color grading and a mist pass to brighten parts of the image that are far from the camera. This gives the illusion of mist in the air, which I thought was a great way to pull this composition together.
As an added touch, I applied an effect to the background behind the fire that mimics heat distortion. This was done with a distort node and a blurred mask. Focus on the moon and you will notice it.

Finally, I was ready to render. By this time I had already rendered out this animation on my own hardware (9 hours every time) and was sick of all the waiting. So I used a renderfarm service called Concierge Render. This video is not sponsored by them or any other entity but I must say that my experience using this rendering service was top notch. Everything was so easy, I just had to upload my blend file and my cache, go through the settings and click ‘render’.

I knew it would be fast, but I was not prepared to witness before my eyes, in my browser window, a project that took my GTX 1080 + i7-4790k over 9 hours to render completing in less than 20 minutes. It blew me away!

The last step was to loop it in Davinci Resolve and add sound effects.
I found all of the sounds you hear in the video on https://freesound.org/

Special thanks to Concierge Render for the incredibly fast render time and the shocked laughter it caused me.
Check them out here: https://www.conciergerender.com/

Also, Davinci Resolve is awesome, and also free. Get it here: https://www.blackmagicdesign.com/products/davinciresolve/

Thank you for the kind words!