Hey there! A few weeks ago (I really only have time to make considerable progress on my work during the weekends) I started working on a chibi model. It started as a chibi model of me, but then, when I started adding clothing, I saw the potential for a Matrix kind of chibi model, so I went with that. The hair was a real pain, after a while I settled at sculpting it, but before I actually found a good way to recreate the 2d anime spiky hair, I tried all kinds of hairstyles. In the end, I got something acceptable.

Without further ado, here he is: 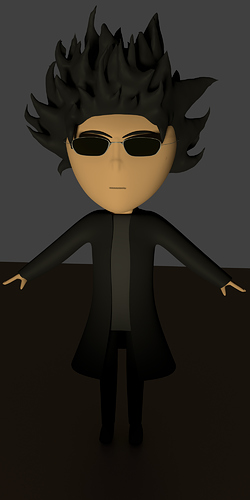 I still have to rig him (also, what are some good ways of rigging him? maybe delete the body and rig his clothes? I have never rigged a character before and I have no clue on how to rig) and maybe add some more detail to his clothing. Also, I want to make him some good pistols and put him in a shootout scene (the model flying around with bullets all around him and his pistols armed :D)

Also, I had trouble with his eyes, so I settled for sunglasses.

This is my second project with no tutorial, the first being a sword (that didn’t turn out that well). Any criticism is welcome.

(I opened another thread for a problem I had with modelling this character, but I am opening another as I have not seen a way to edit the title or the main picture. Please excuse me and, if such tools exist, point me in their way and possibly merge this thread with that one)

EDIT: i wanted to attach the .blend file but apparently it’s too large? (~30 MB)

Hello! I have made some progress, I created the armature and gave him some eyes. Right now I am looking on assigning the bones to the character, but I get very weird deformations. If someone could help me, I would appreciate it! Thanks a lot!

Here is a link to the .blend file. (Mediafire link, I am unsure why, I believe the file is too big, I can’t upload it directly here) 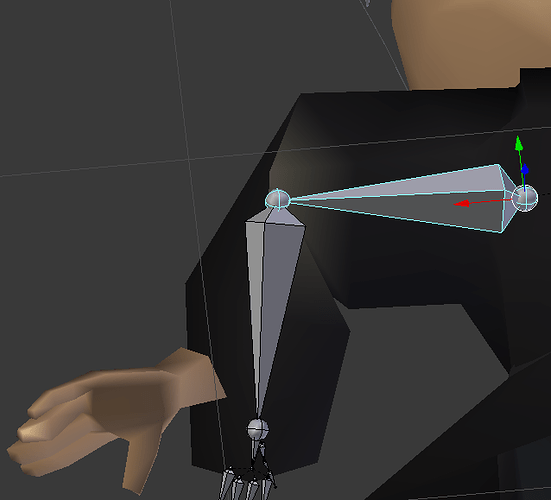 This is what I mean by weird deformations. (I did not yet rig the hand, I want to solve this problem with the deformations)

I need some help with this, it burned me out.