a clay sculpt of chun liu (cast added in post #20)

after i did in blender the portrait of chun liu, which is in my sketchbook, i decided to try to model him in real world, using oil based clay. i intend to make a mold from it, so i can cast him. which me luck for that 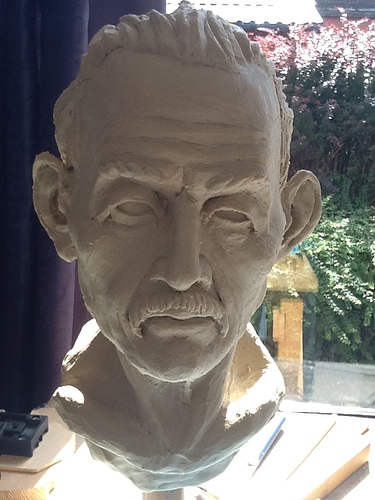 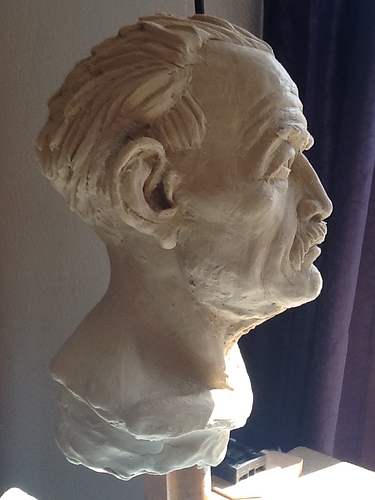 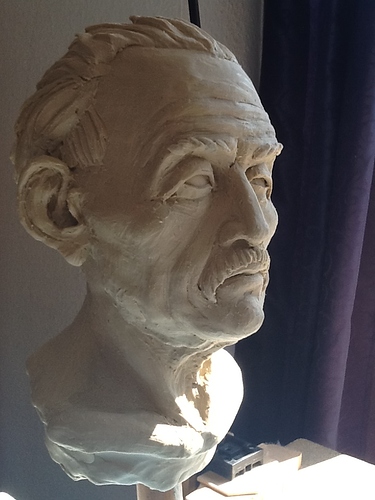 Oil based clay? I used castilene at one point. Doesn’t that stuff require a constant heat source to manipulate?

anyway great stuff! he seems to be missing the fatty tissue that comes inbetween the upper eyelid and the brow.

This is amazing, good skills.

This gives me mood to try doing some traditional sculpting myself.

I had seen in a tutorial that someone used something called Pro Clay, anyone know about this?

ng, no the oil based clay do come in different hardnesses, mine is rather soft, actually almost too soft for detail work. but i do love it for the sculpting of the main shapes… and, no, if you look the references (i posted a link in my sketchbook) i think there is no such fatty tissue, he is asian, and lean, so i think i am true in this point here,but i will check again after casting, and refine then smaller errors. thank you for making me aware of potential mistake

glad i inspire, const, and no i do not know pro clay. i think here in europe we have different sorts of clay anyway. best is just to buy a little and try if you like it, thats how i found the clay i like and use now…

Really amazing. I’ve always been too lazy to do much traditional sculpting, so I’m always impressed with those of you that do.

Good one Doris!!!
I have to ask it: why not the traditional natural clay?

thanks xrg! go, just start its so much fun!
thanks michalis, oh, because i hate to keep the clay moist, ,i have not that much time to sculpt, and so a piece sits long times inbetween, in which i would have to keep it moist…i am bad on duties “i have to do” …

LOL
I thought so. bad on duties… I know very well what you mean.
On the other hand, it’s the real thing.

Really good sculpt Doris,actually I think better than your 3d work(which sometimes lacks a bit volume,it’s often a bit narrow)
Not sure what “it’s real thing” mean Michalis,you seam a bit obsessed by the past,oil clays are a more practical medium than water based clay(really good only for big sculptures)

thank you renderdemon! somehow its easier when you also can feel the sculpt, we cannot have that in 3d… i will take your advise about the volumes, and try to improve on that. thanks so much!

I am so envious you can sculpt with clay, I never went past play dough

Michalis,you seam a bit obsessed by the past

LOL, I am.
This is why I am in love with computing and 3d apps.

Great work! the symmetry is good!

tyrant, thank you!.. but this oil based clay is very similar to play dough

just try and enjoy! you have so much drawing experience, you will do great in clay!!
filou.rod,yes no undo, no symmetry,actually i do not miss so much, undo i rarely use in digital sculpting either, i rather sculpt like in clay… yes, symmetry is always tricky, but when you additionally can feel and not just see, it helps

Symmetry…
Impossible to sculpt a decent nude study with symmetry on.
Except you like baclava the famous delight. (male nude front)

lol michalis, i laugh because of your typo: i did not know what “baclava” is and looked it up via google and found recipies for oriental desert or cake…?? i wondered how i should connect mentally that with “male nude front” … left me puzzled … lol, then i figured you maybe had a typo, and found you maybe mean balaclava, a head wear (also i did not knew this woord before, but google is always so helpful). while still a little far from male nude front, it fits, to this and to the symmetry remark… lol great one!
and, of course, you are right, symmetry is needed to some aspect, but good sculpture is free from mathematical symmetry but has the natural balanced asymmetry we perceive symmetrical , the beauty is in the asymmetry… i got this quite good in chun liu btw i think

LOL, I am.
This is why I am in love with computing and 3d apps.

An then why are you complaining so often about 3d apps ?

Anyway,about symmetry I think the same(never sculpt a face with symmetry on),even if I don’t think Doris beauty is in asymmetry,actually for major part of the people is the contrary(it seems that humans love more faces with more symmetry,as found in a lot of scientific study)
Asymmetry is simply more natural.

Being in love and complains go together, how old are you renderdemon? Hey, I’m joking,

Being in love and complains go together, how old are you renderdemon? Hey, I’m joking,

and finally here are images of the cast i did. i made it the traditional way, meaning i made the mold in plaster of paris (and not latex or silicon or something modern like these) and then removed the clay from the mold and casted in plaster of paris. i made a hollow cast, since i did not want a too heavy sculpture. … as this way requires the mold to be chiseled away from the cast that is inside, it means, there is only one try! either it works and you have a sculpture, or it faisl and you have nothing… in this case, the cast was pretty good, almost no airbubbles, but chun liu had lost his ears, so i made new blobs of plaster of paris, put where the ears would be, and when the new had set, i carved him new ears 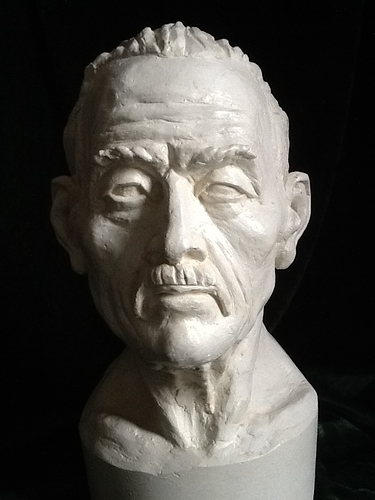 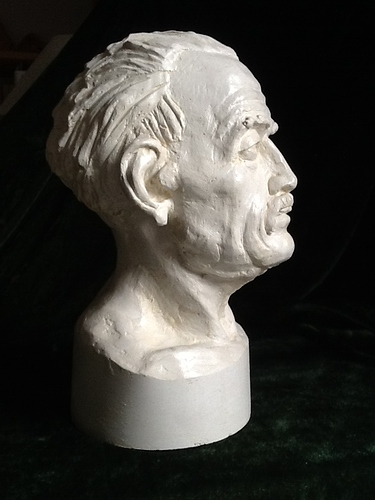 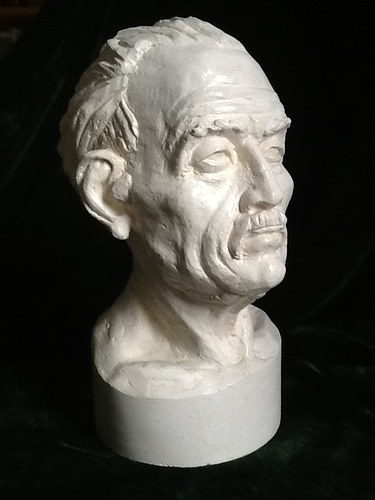 (why does the forum rotate my images by 90 degree when i upload them from my computer directly???)