A Curious Obsession With Trees

I like it! May be it is worth adding some other grass, not just yellow flowers and basic green?

Next render, could you please elaborate on the grass bit? I thought it looked fine and no one else commented on it. 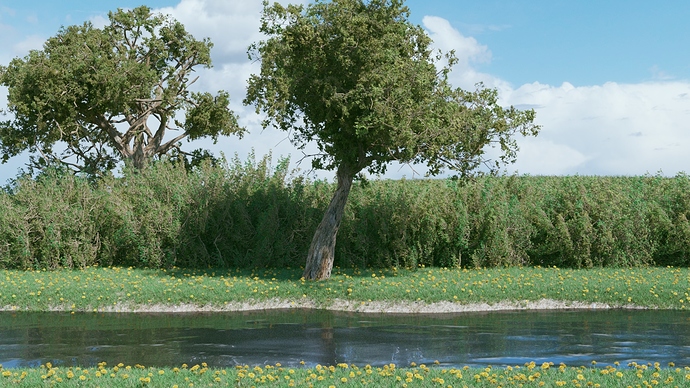 Hi! very nice!
I’m just going to criticize observational things, because I don 't know how you can do all that!
The river: The border of the river are completly dry, that can’t be. water climb because of the superficial tension that create the capilarity, so earth just drink water just by contact it. so it goes up. You have to darken (soils wet are normaly darken that the dry ones) up to 15 cm more or less.
Air: that sims a spring day, and there are no flies or pollen or birds, or anything flying! and that makes me uncomfortable! hahaha.
Also some mist pass can help.

Overall a good start, you have most of the pieces but they aren’t assembled in a truly convincing fashion. Starting with the far background:

1)The horizon at the right is unnaturally even, like a clipped hedge almost. It needs some irregularity, even raggedness. This is also true for the evenness of the row of bushes along the river, real undergrowth like that is very randomly distributed. The river banks are of the same kind of artificially even form, like groomed lawns where flowers have been planted. All the same flower also, no weeds, none varying from a very similar average size. Nature is much, much messier than that.

Time now, I think, to indulge in some study of tree and plant species to find out which might inhabit this scene and how they would present themselves on a high-summer’s day like this. It would do much to improve the believability of the image. There is an incredible number of images on the web that can be used as refs, maybe start a trees/plants folder?

These comments are to the image in Post#22, btw