A cycles safe - no more, no less

Thought I’d try myself on a modelling exercise, and created this model of a safe below.

Around 2-3000 samples, rendered in Cycles for about twelve minutes.

I would appreciate feedback and/or criticism. 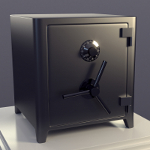 The only criticism, if indeed that’s what it is, is that the gap round the door is a little rounded. The edges of safes I’ve seen have all been very sharp, but those were old so maybe they’ve changed?

But what you have is convincing and, strangely, appealing.

2k samples in so short a time is very good at theat resolution - CUDA?

Wish ati cards were similarly paced; my i7 is about the same, perhaps even faster. And the card itself is 6950 2gig memory.

Is it intended to be non realistic or realistic?

@Writer’s Block
Thanks for pointing that out, it really looks better and much more secure without the huge gaps in the door, I’ve updated the first post with a new render.

You’re correct, I used the GPU with CUDA, it rendered at around 3 samples per second, or 100 samples in 32 s. But I think the simplicity of the scene really helps. You seem to have a beast at your disposal, my cpu renders at perhaps half or maybe even down to a fourth the speed of the gpu!

@portgas
I’d say non-realistic. I didn’t follow any reference of any real safe models and have not added textures or other imperfections as is apparent of the image. Basically I aimed on not spending too much time modelling, creating a polished render such as the stock photos you find around the web that are used for articles and the like.

Agree, much better; In fact, just about perfect, or a close facsimile.

As I’ve said it looks convincing; I like the way it squats atop the pedastal/pyramid, ready to receive homage from worshippers…

Haha, I know I’d love some donations my way.