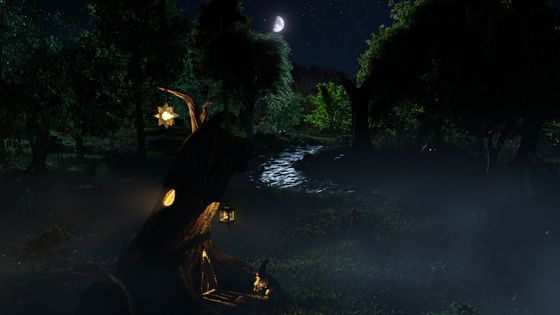 A fnaume is a combination of a faun and a gnome. Also it has only one leg (that's what you get when you mess with nature) For full credits and links to the 3D assets that were used, see the topic on... 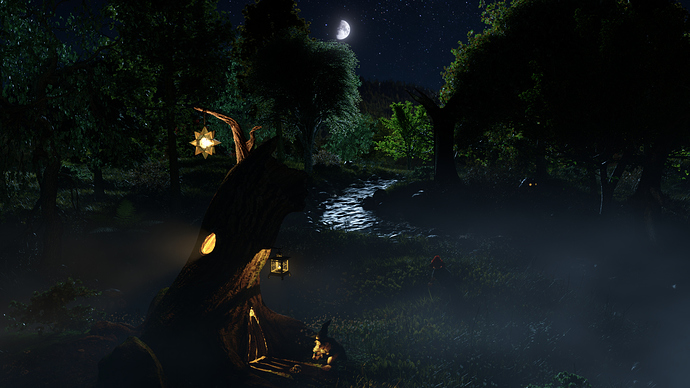 I’m making this fantasy forest using a stump I modeled years ago and a bunch of assets I downloaded on blendswap and other websites:

Edit: current progress: [image] I’ve been working on this creature for a while now, and I’d really like critiques. Eventually I hope to make a 480-frame, turntable animation with it, but the small details are still pretty poor quality, so I’ve a ways to go. I plan to add a catipiller and ladybug later on to indicate scale, (the scale will be pretty small. I plan to change the grass and moss size). Any critiques would be appreciated.[image]

I definitely prefer it without fog. By the way, if you are using Sheep It, it only does animation, so it is pointless to have a still image on there. Anyway, if you really want good volumetrics, I can only suggest you let it render for a longer time (how much longer are you looking at?) and do the real volume scatter. Did you apply it to the world or did you make a cube? If you use a cube surrounding your scene (obviously not cutting off on camera), then you’ll get a quicker render.

I used a cube for the volumetrics and the camera is inside (don’t know what you mean by “cutting off”).
Sheep it splits still images in 64 tiles to be distributed. Also you can get a high quality render of a still image by rendering it on several frames, animating the sample seed (by clicking on the little clock) and averaging the result. If you do that, Sheep it can only split in 4, but I used this little technique of mine to split it just as I want, so that it’s faster to render. I also used it to be able to split my scene in half to make 2 smaller files so that it’s also faster to download for other computers. I was pretty satisfied with the result (without fog). The bug I was talking about is apparently due to a server issue Sheep it has been experiencing in the last days, which resulted in half the tiles not being rendered and the project being considered as “finished”.

The fog looks good but needs a lighter falloff around the edges. a light to give the tree some rim would set it apart from the vague background. The stream looks a bit unnatural and the tree seems to be looking at the the other tree (sorry if that is how it is supposed to look). The tree in the background right in between branches seems to be sprouting out of your lead tree’s head.

By cutting off I just meant that the fog doesn’t have visible flat edges on the sides of the cube. The fog is looking much better. SheepIt changed since I last used it then, could be useful for when I do renders lol. I agree that the stream needs work. Streams tend to be flatter, and have the white foam on top. I think that the stream is too clear and the bumps need to be more subtle. See this for example: 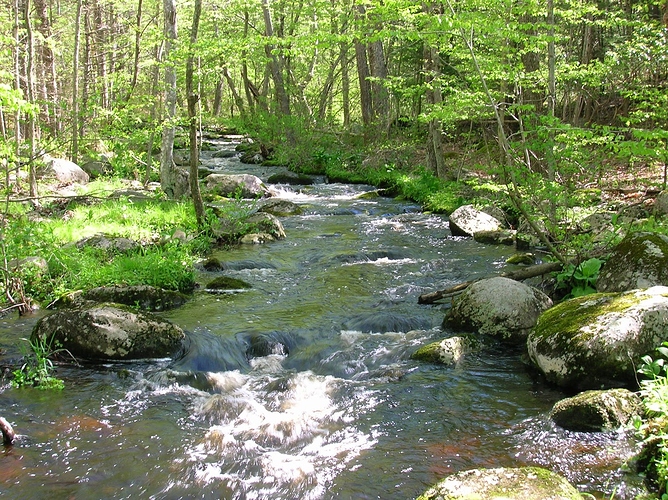 Thanks a lot, I didn’t think of it this way for the stream. I may be able to tweak it without doing a high-res simulation.

I think it looks pretty good. The grass especially looks quite realistic. As for my critiques, I think the moon is too small. It could not cast that much light on the scene while only being that small. Besides, a big moon would add a lot to your scene I think. The water also needs some work. It will look a lot better with foam, and a noise texture might also help.

@GPS14 @Zak_Gre @terrainer @gramhbo7 sorry to bother you. I’m restarting this thread fresh with the latest version of the scene but without creating a new thread, so I deleted my comments and would like if you did the same with yours to make it consistent. Thanks in advance.