Made a lighter, comments are welcome, especially constructive
feedback on how to imrove the scene. Or if you think it is horrid
image let me know.

Very realistic render, but I will try more contrast (a little coloured to hot color)lights and maybe glow efect

G_Taurus I will give those a try. A glow effect and
some color to the lights,right?

Nice work so far. I hope the scene is temporary and you will make a better one because the metal texture on the wall and its reflexion on the table give the impression the picture is scratched vertically which is odd.

The lighter itself is a great model. Maybe add a few scratch on the chrome part because you will always some in real life .

I added a slight glow. removed the reflection of the wall on table.
Tried color in the lights, but did net get it to work well, so instead an added saturation.and altered the mapping of the wall,now it should look like painted panel.Added some scratches.

I can tell you, being the owner of a stainless steel zippo with a mirror polish on it, the one thing you always see on metallic lighters are fingerprints, smudges, little bits of grease…signs of use and wear. The scratches you’ve got on there are a good start but they’re /too/ perfect if you see what I mean. I’m not sure how to tell you to do the smudging textures as I suck at texturing anything, but you need some small scratches around the big ones, just from knocking around in a pocket with change/pocket knife/whatever (not as deep as the scratches you have on there now) and some smudging. Maybe someone else could give a tip on how to do that.

Slepnyrl and Taladan. Now there is quite a lot of scratches and
some finger marks. I put a light flare to the hot spot.

the first render is the best of the three, IMHO. the flint wheel texture could use a lot of work, and it wouldnt hurt to model the gnurled grips on it either.

all the scratches and smudges are too big, they need to be much thinner and not has pronounced (scratches) and the smudges are wayyy to dark and odd looking, should only be noticable when the light catches the variation on the surface. See if you can find a finger print on google or something and use it as a nor/col texture and give it a grey color with a little spectra as well since it’s oily. although that setup could be totally wrong, worth a shot.

A suggestion for the Background. Rather than putting it on a wooden surface in the corner of painted walls how about making it a table corner and adding a blured background image. It will give the scene a more “open” look rather than that small corner.

Here’s some references for you of actual lighters and what we’re talking about with the scratches/smudges: 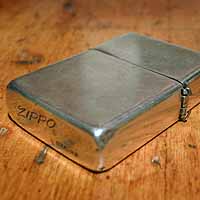 There are more, just do a GIS for ‘Old Zippo’ and you’ll see what we’re talking about. Hope this helps.

Those scratches are way too fake. You’ll need a huge UVmap (about 1500x1500) to eiminate those pixel-looking marks. A pressure sensative drawing pad is great for creating natural looking scratches.

Use a 50% grey background. Add scratches on it with a 55% grey color. They should be soft and tapered.

That is how I got scratches on this this

I added a flame adjuster to the lighter and some detail to the roll that
makes the spark. Added an uvmapped box that is an environment to the lighter, digital camera pictures to different directions from a kitchen table.
Now the largest model part has a color and pumb map that is of a random
look, to make the lighter look like it has had some use.

Desoto, I focused now mostly to worn apperance of the surface of the lighter. Made a render with lots of scrathes and then compined in gimp
the no scratch and scratched version, just a opacity of the top image
to about 50 and some brush work with different kind of brushes to erase parts of the top layer, hence making some scratches of different shapes
with brushes to add a little to the image.

Spin, I do not have a pressure sensitive drawing pad at least yet.
I used the levels of gray you suggested,
-edited- In this one I have about 10 maps applied to color, specularity,
and nor. I used the levels or gray you advised, but now that there is
such a bundle of maps I can not quite remember what levels/strenght
the grays have or did I adjust with effect slider, probaply both.

Taladan, thanks for the links to images, I am still pondering where I can find similar surface appearance to take a picture of.

Slepnyrl, well now i did put the lighter to a environment.
Though I should have put it to a corner of a table like you wrote,
I think will chance that.

Khnum, I agree or rather agreed with you and made chances to the image.

Traitor, did I get the image be about of the same level as the first one
or is the first one still best of these? Did I add the knurled grips, I added
few details, but i don´t know what are gnurled grips?

I probaply did some messy writing, I got a flu.

There is a conflict between the extreme sharpness of the near objects such as the table and lighter, and the extreme blurriness of the oven and the kitchen furniture, which are not far enough to justify being so blur…the DOF is excessive, IMHO.

Juanjavier, I lessened the blur.
I took a picture of a lighter on the same spot as it is in the image
and took some reference of the mount of blur on the photos background.

I did not like the background so I arranged a quick photo, did I
do ok? or do I need to go to bar to take a one good shot

I mean a photograph.
Scratshes at this point ???