a mesh, a curve, and a struggle for deformation

the faculty of architecture here keeps me very busy, and even in these festal times i have come to a problem/question within the area of 3D modelling.

the question is simple - how do i screw a mesh along a curve?

to be more specific - i have a staircase ramp, well modeled in top view, and i would like to stretch it along the Z axis (the path)

the desired case can be seen on attached screenshot; however, this has been modeled by hand, as the Curve modifier has been giving me very weird results, and sometimes making the ramp disappear completely

i hope i expressed myself clearly, i am eager to suggestions, tips, or even precise how-tos

till then, Merry Christmas,
Adam 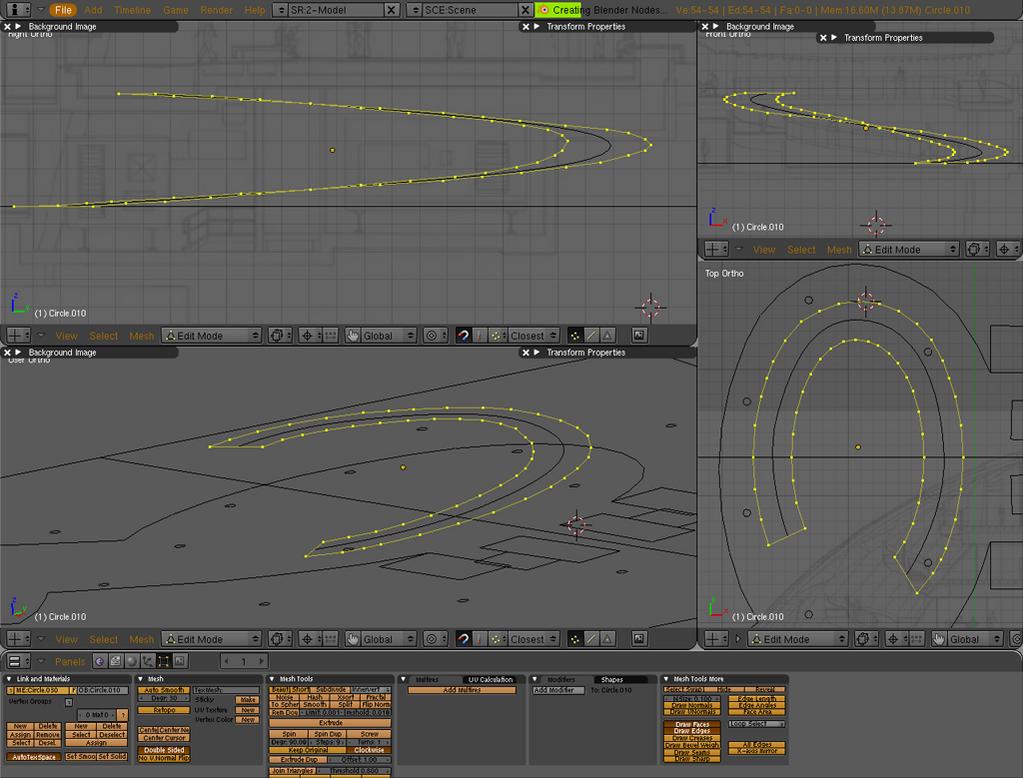 oh well, the solution found itself

straight nurbs profile extruded along the shaped path did the trick.

still, it’s just a trick, so if anyone knew of a way to modify that exact object to fit the curve, i (and i certainly wouldn’t be alone in this) would really appreciate it

You could also use a curve modifier: http://wiki.blender.org/index.php/Doc:Manual/Modifiers/Deform/Curve. Just model it as a straight staircase, add a Subsurf Modifier (using the simple subdivs option); then add the Curve Modifier, using the centerline of stairs in Plan.

When you adjust the curve/base-steps , the staircase also changes.

but i have already tried that - it either malforms the staircase (ie. rotates and screws in weird unwanted ways), or i don’t get the exact floor projection i need as it’s another object bent - and in that case i get a smoother result with two curves.

Seems to work well enough here.
Just a quick try: no landing or anything, but you get the idea.
The center of the curve and the “step” have been aligned - although it may not be necessary - I don’t know.

Edit: If you post your stairs (Plan view with ht. of riser/tread) , we can try our hand at it.
Edit (again): Another alternative, which might work is to take a 3d curve - properly subdivided for no. of treads - and duplivert the profile of the step. Copy this (and move to another layer for later revisions). Then Alt-C, to convert to mesh; and use the solidify script on it.