A morning in the city

So, I have been working on this project for months now - off and on - in order to create a wide futuristic city vista that I want to print out as a poster and put on my wall. My first two attempts were not so terrific; this time I think I’m getting closer. Clouds were made with the cloud generator. What do you say, how could I improve the result? I will still add a greater variety of buildings for the foreground. There are > 40 different small buildings, but blender always manages to put 2, sometimes three times the same building on neighboring spots - I follow Blender Guru’s city tutorial to some extent, with particles emitting from vertices (I adapted the tutorial for the blender internal engine, though; also, no UV-unwrapping - I hate doing that ;-)).
The blender file has become really buggy now: I can no longer generate or degenerate clouds; have to do that in another file and append the objects. Blender also sometimes randomly renders not the layers I told it to, and, the most annoying, it put two particles in the sames spot in one instance, and there’s no way to get rid of that without losing the building arrangement I fought hard to achieve. And yes, I checked there were no 2 vertices in the same spot, no two emitters in the same spot, fewer particles than emitting vertices. I may have to do that again, or at least place another building in front of the most obvious “offender”. Okay, after this diatribe, please let me know your thoughts 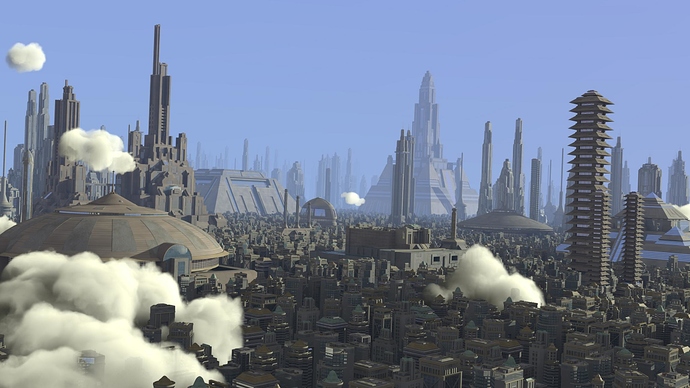 looks really good. I like the buildings. The clouds look thick. camera looks tilted ever so little to the left

Thanks. I’ll have to look at the camera angle; didn’t notice that before. The clouds are exactly as I want them; actually, I had originally planned to have them float way above the buildings, but when I saw how they interact with the buildings by accident I immediately went for that look. I have solved the particle problem in the meantime - I had the setting for emitting the particles on ‘random’, which apparently meant it sometimes emitted two particles from the same spot. Also, I have changed the aspect ratio to 3:1; this is a standard panorama ration which makes it easier to print it as a poster or on canvass. I’ll post an update after the next render