Pretty much got the basic shape right. Will eventually make a rider for it but still have a lot of super-detailing to do first

here it is with the intake gates fitted. These are linked to the throttle and open/close according to engine speed. There are three of them - the top one opens upwards and it then sits under the framework beneath the handlebars. 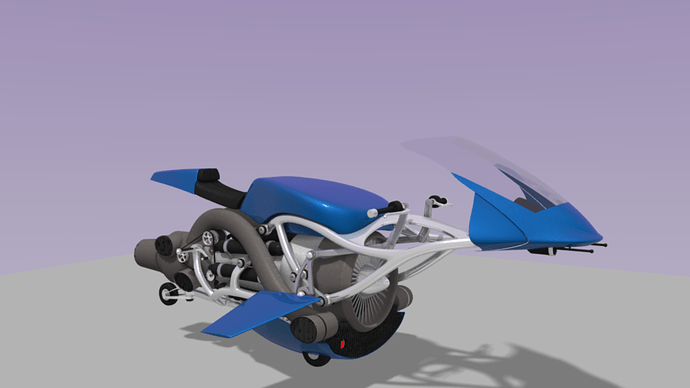 I think the wings need to be longer. It doesn’t seem possible those would make enough lift. Maybe make them retract like a jet fighters wings. A tail spoiler would negate the force applied on the the nose.

^^^ ignore this man, obviously there is some kind of anti-gravity hoodoo going on.

Reminds me a lot of the old playstation game Jet Moto. Will be interested to see it with all the trimmings. Nice post.

So is this supposed to fly or go really fast on land?
Interesting contraption tho… practicality wise however, it might not be

The wings provide only a small amount of lift. It has 7 jet nozzles - one big fixed one at the rear for forward propulsion and 3 moveable ones on either side for lift and control (a bit like a Harrier jet). I’ll eventually rig the side nozzles so that they swivel and open and finally I’ll use a particle system to do jet blast out of them. I’ve also done some “gates” for the intake which open/close (still not sure about them though - I’ll post a movie showing them in operation…). It’s not meant to be 100% realistic just 90% believable.

Oh – nice model. Suzuki Gixxer meets one of the forest speeders from return of the Jedi.

Very cool…I want to take it for a spin if I may.

Very awesome. I played around with an idea like this a few years ago, but I couldn’t find a design I was happy with. This is really nice.