A Proper Keymap for Blender

I’ve made yet another iteration of my simple keymap for Blender, this time compatible with 2.8. I’ve decided to be less humble this time and simply call it the Proper keymap for Blender 2.8, since current default 2.8 keymap leaves much to be desired, and industry standard one is still not released, and shaping up to be a missed opportunity. My keymap is simply superior, since I’ve put way more thought, time and effort into it than anyone at Blender Foundation ever will.

You can find reference sheet for all the key bindings here:

So for anyone who is interested in not just using Blender, but using if efficiently, and working in the flow, this is THE keymap to use.

There may still be some things I’ve forgotten to update or some little bugs in the keymap. If you come across any, please let me know in this thread and I’ll fix them asap.

… did you made this keymap also considering linux users ?

Nope, but unless they are some kind of aliens, nothing will change

Concentrated around left alt key just means most of the features are easy to reach from your natural hand resting position. For example, in mesh edit mode, A is Loop Cut, S is Inset, D is Extrude, C is Bevel and X is Knife, instead of these tools being scattered all over the keyboard and you constantly having to move your hand around or twist is in awkward positions to get to them

unless they are some kind of aliens

well, I might know some that could raise the question, but anyway, thank you for your work and your answer.

This is a great idea, and we’re very much on the same wavelength. I do hope they make editing the keymap easier.

Have you considered conflicts with some commonly addon used hotkey? For example, HardOps uses the q key.

Here’s something I’d like to suggest implementing. Key combination tweaks for various actions. For example, I have pie menu for orientation set to W,E,R + LMB so that I can access it modeling, uninterrupted. This also frees up the Ctrl+Q key. I also have general tweak set to MMB and Pan set to Alt + MMB - this way I don’t have to lift my alt thumb, but this my just be my personal preference. I’m interested to hear what you think about keeping Alt on for navigation purposes.

I can’t obviously take every 3rd party addon in the account, but I have taken specifically few most popular addons into account, and made some keys free for them 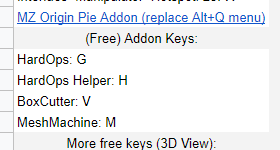 On the downside, you will have to remap them yourself, but luckily all these addons have keymap customization options.

I wanted to keep it somewhat simple and familiar, so that’s why I did not include non modifier keys as modifier keys. It’s something people are not really used to so it’s not easy to figure out.

I have Pan at MMB, Orbit at Alt+MMB and Zoom at Ctrl+MMB, here is my reasoning.

By default, Blender in 3D view uses MMB for orbit, and Shift+MMB for pan. I don’t think that’s a good decision.

If you think about it, when you are in perspective view, then you pan about as much as you orbit, but as soon as you get into any of the aligned views, such as front, left, top, etc… you can only really pan. You start to navigate in 2D only, and if you do orbit, it automatically ejects you from the view you want to stay in. So if panning is what you do all the time in those views, the it makes no sense to have to keep shift held any time you want to just look around in that 2D view.

Having it just on MMB keeps your other hand free, and navigation becomes less annoying. On top of that, you also suddenly get consistency with all the 2D editors, such as node editor, UV editor, image editor, etc… since they all use MMB, not Shift+MMB to navigate

This becomes all the more useful for Grease Pencil, because there, people spend majority time working in 2D. And even in 3D view, when doing 3D work, I’ve noticed people generally tend to Pan more than Orbit.

And of course, you can just grab this keymap, and use it as a starting point instead of Blender’s default keymap. So you can still customize it to your liking, but all the keys you have not customized will have better bindings than the default

Agreed. I personally have my muscle memory hardened by Maya, so navigation is something that I won’t change, but you have solid reasoning behind that. Question about your keymap. I understand that it’s not yet complete, but I can’t seem to find the Material toggle F6.

Yeah, sorry. As I wrote in the original post, since it’s WIP, the Google Sheet refers still to my 2.79 version of the map. There is no material mode in 2.8, so the F6 key is lookdev mode

I am still working hard on the keymap, so expect the remaining two editors to be done and new Sheet for 2.8 version to be done probably later today

Although, beware that if you were to change to Maya style navigation in my keymap, you will likely break the loop selections in edit mode (Alt+LMB), Lasso selection (Alt+LMB drag) and Brush resize in all painting edit modes (Alt+RMB).

EDIT: Post no longer relevant, the keymap is now finished.

I’m aware. So far, they’ve been resolved. We’ll see if they last. For brush resize I’m using an addon that enables RMB drag.

If there’s no addon directory, then you will have to create one manually

And shortcuts will work once you import then and click save preferences. Often, new users get confused by stupid decision of Blender to not save preferences unless you manually click that button

Now it works! Thank you so much dude, for offering this set - was fed up waiting for the official one, now blender feels more like home!!!

This is great, I installed it without a hitch and will set it as the default keymap on all my machines. As a longtime 3ds max user I find it perfect!

There is a part of me that really wants an alt+left to rotate view as in maya/unity since I find it easier on my wrist (and mmb life time) but I will avoid the temptation to change it for now.
So far the only annoying part is that alt+mmb that doesn’t rotate view when coming back from a different window.

Maybe you could put the config on a repository to keep people updated on changes?

For those wanting or missing the Maya style navigation, it can be found here [Input] Custom Blender Setup | ALT-Maya Navigation, LMB Selections | for blender 2.80

Additionally there is an industry standard keymap in the works, which hopefully will be out by the time 2.80 officially wraps up.
https://developer.blender.org/T54963

I will have to get familiar with how repos work first

The focus thing is something deeper in the Blender I am afraid. If you use Windows, then while I am 99% sure you already have it enabled, make sure this is enabled in Mouse Settings: 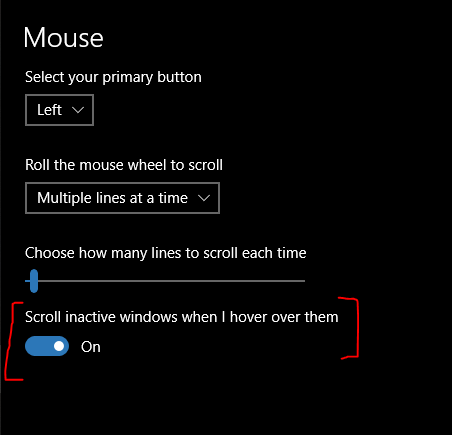 If not, then it could be the reason.

If you were to switch orbit to Alt+RMB, the conflicts should not be that difficult to resolve. Alt+RMB is tweak move in some editors and brush size in others. It should be fine to just swap those to Alt+MMB. I use Alt+MMB for lifetime also. I’d perhaps suggest looking for a mouse that doesn’t have very tough middle button. When I started a new job few years ago, I sat down to a computer which had some logitech mouse with very tough mousewheel button. Suddenly, I could not stand Alt+MMB

I have just updated the keymap with small tweak, so you can redownload it to update, or do the change yourself. I have changed subdivision level 0 hotkey in Object and Sculpt mode from Ctrl+0 to Ctrl+`, so that it’s easier to reach

I had some problems with alt on blender in ubuntu, that sucks, but one has to disable the dumb alt key options on the OS, to be able to properly use blender anyway, so dont even worry about it. OS’s shouldn’t do dumb stuff like that