Hope I don’t go too fast. I have a whole new respect for those of you that have been making tutorial videos. Trying to keep a certain pace and avoiding distractions is a bit tricky.

thanks . . its really help. especially for beginer like me . . :yes:

Nice tut, very simple and calmly expained. I’ve been at blender several years now and maybe oddly I haven’t done a whole lot of compositing layers, mostly colour grading etc. One of the reasons I watched your tutorial was a) because it was using Cycles (not much info on comping with Cycles just now) and b) I was hoping to use this method to composite on a real photo background.

Using your technique I can see it’s probably possible, although I’m not sure about how to get the reflections from the mixed background image onto the surface of the car reflections.

I know normally a HDR image would be the thing, but I’d like it to match the background, any ideas?

The scenario would be taking a shot outside and using that as the background photo, then taking the shadow pass off the plane and combining them with the vehicle, is this possible with Cycles, and do the new render layers in blender 2.62 help in any way?

I tried to come up with a short answer for you, and unfortunately it kept getting too complicated to try to type out. I tried making a sample scene, but the packed image is not unpacking in the compositor.

I’ve posted a picture of a shader I made though,… it is what I used on the object to fake the reflection from the image. It looks a lot more complicated than it actually is, but I may have to do another tutorial just to explain it!

edit: I’ve played around a bit more with this, and I’m having a lot of trouble trying to make this work using only cycles. I have not figured out how to generate a shadow only pass, so I end up having to put the shadow on a white plane, and then use multiply mode in the comp. This requires a lot of tweaking at the moment. It works, but only after a lot of effort, and I needed to add a curves to make the plane full white.

For the reflection part, the material node I posted works, but I think currently you would have more control over this with the internal render. I have done comps in the past where I duplicate the scene and render some layers in cycles, and others in the internal render, followed by a comp that ties them all together. That’s still probably the best way to do it until cycles matures a bit more. 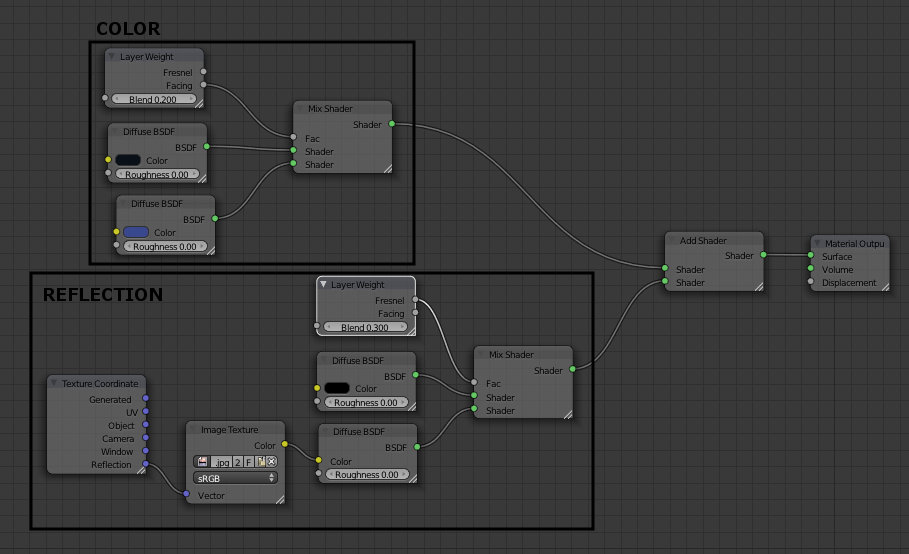 Thanks for the reply, yeah I guessed it’d be difficult, as I haven’t seen any example renders of this with Cycles yet - don’t think I’ve seen the reflections with BI either. I had a bash myself doing some compositing earlier in the week, rendered a shadow pass as you described with BI, then did a render with alpha of the viehical with Cycles, but although I felt impressed for a moment, the lack of reflection of the environment really let it down. I guess this will be a common enough thing as soon as Cycles ‘matures’ and Mango moves further foward.

If you do have time to make a tutorial on the BI method with some Cycles elements as you suggested (it’d be so much more impressive than a cg background), I’d love to see it as I’m sure others would too, although I imagine it’d be a long enough tut - Here’s hoping though