This is the first project I finished in Blender for a while.Hope you guys like it.Tell me what you think.If you do like it I put it for sale on Turbo Squid. 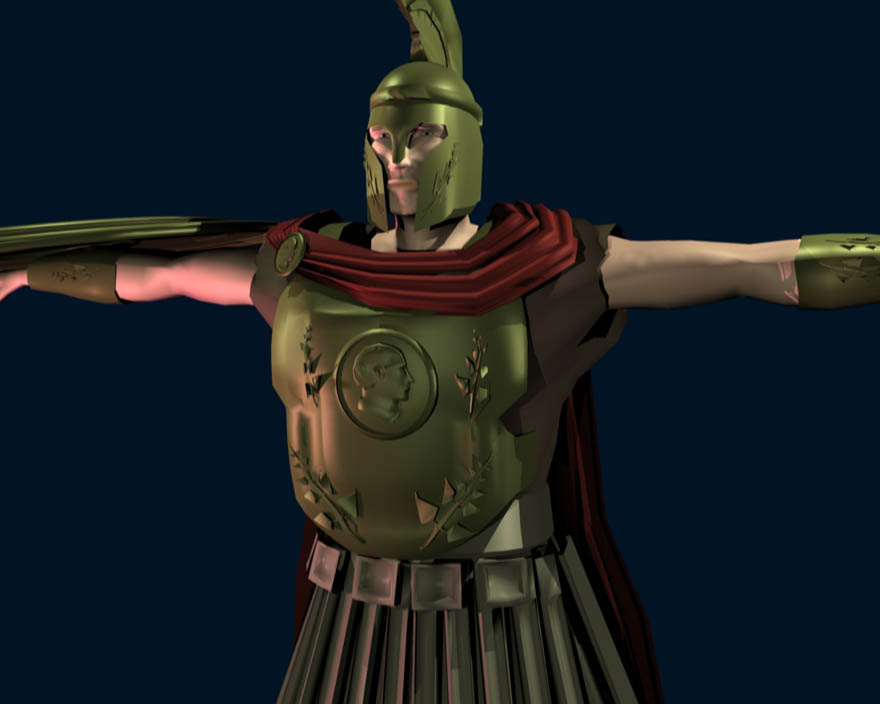 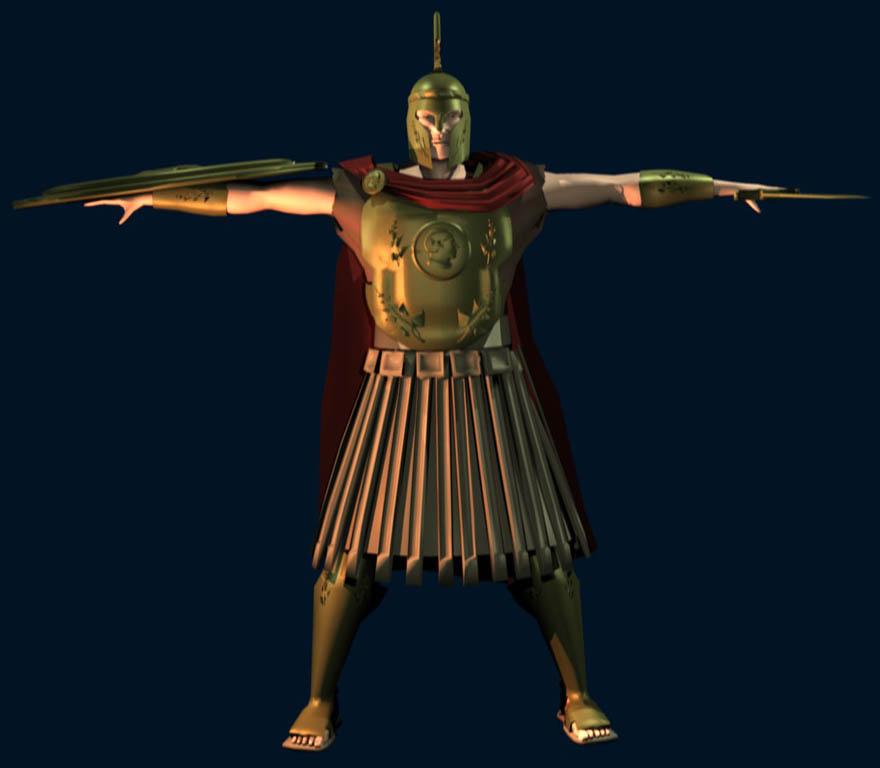 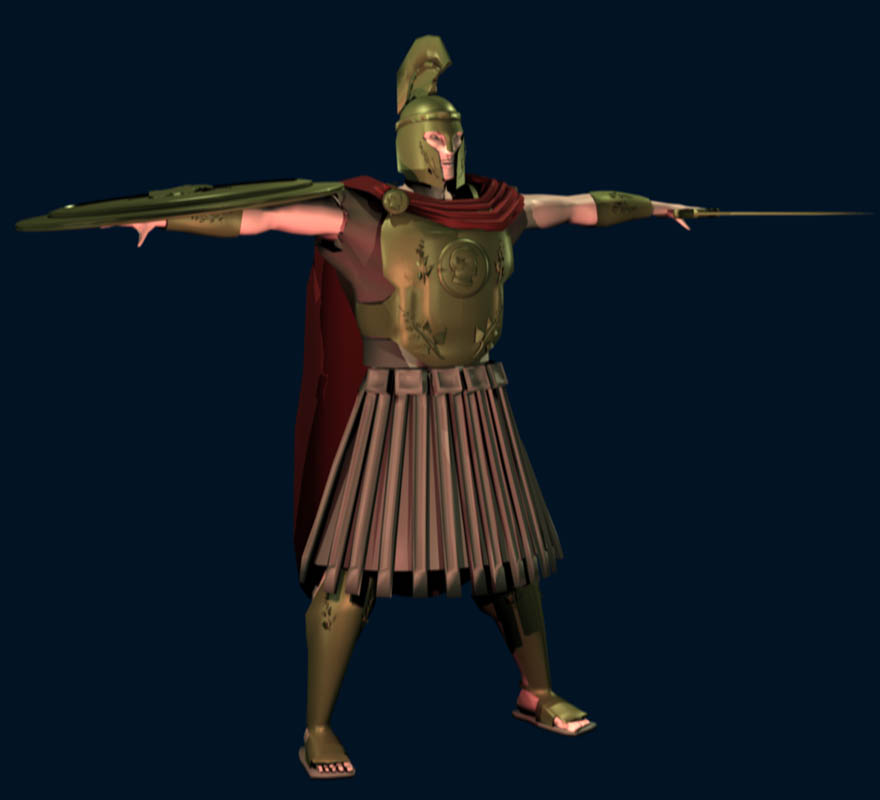 But I think we need a wire first before we can decide whether it’s worth a buy on tsquid. :rolleyes:

Alright, here are some wire shots.Tell me what you think?:o 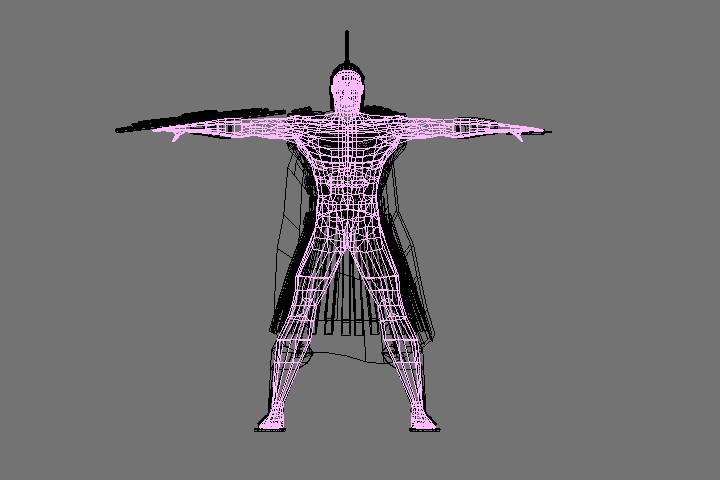 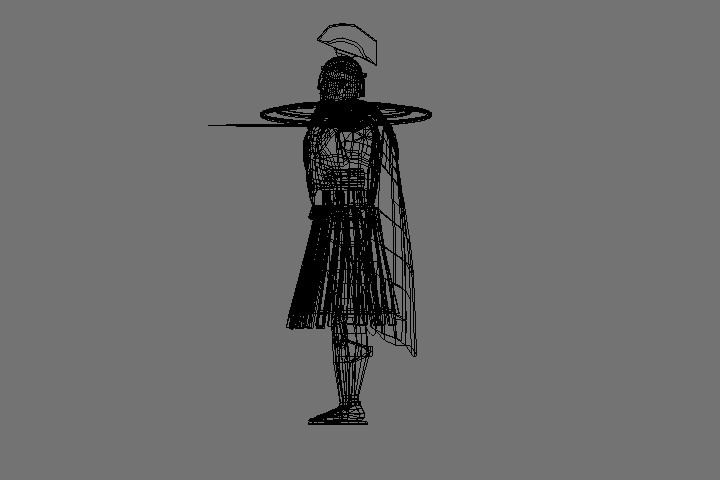 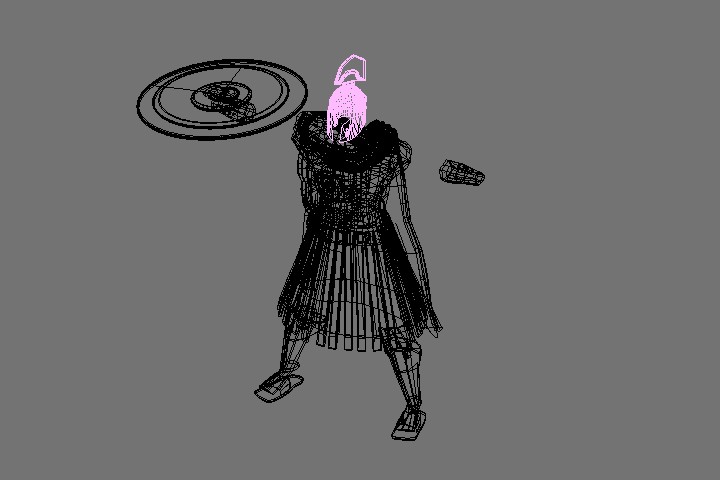 nice work! but is he getting crucified? I’d rather see an action pose…

His chain/leather skirt is way too long

Take a look at this reference image

You’ll also notice that most roman to medieval armor with such “skirt” design don’t go down to the knees for mobility/flexibily purposes. So make it shorter and you’ll see an improvement (in my opinion of course)

what about the shield, they used to be a square

else a great model

Thanks for the input.The reason why its not poseed yet is I didnt really want to take the time to rig it.But I might try somthing.
I will try making the skirt shorter and see if it helps.
I’ll also see what I can do about the shield thanks guys.

You may or may not care about this, but a centurion’s helmet plume ran sideways - from shoulder to shoulder, not front to back. The reference picture several posts above shows this.

Good model overall. I like the raised detail on the metal.

Also, the style of helmet (around the eyes & cheek-guards) is greek, as well as the (already mentioned) plume & shield shape. If you intend to sell this model, perhaps rename it or at least make it historically accurate to some degree. Who knows, it may sell…

This is the updated render.Do you think it looks better?
I really wasn’t trying to be historicly accurate I was looking at a 3D model by Jeff Unay., a guy who went to school at the same school I went to.Hope you like the changes. 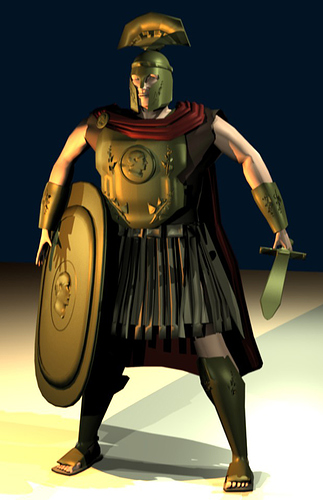 Roman shield style changed a lot over centuries; the rectangular shield was only used very late… Armor and helmet style even changed and differed between various units. Without knowing what unit and when there can’t be made any definite statement about the correctness of the equipment.What surprises me: He is left handed.(Edited because this input box doesn’t work reliable…crap).wysiwyg { background-attachment: scroll; background-repeat: repeat; background-position: 0% 0%; background-color: #f5f5ff; background-image: none; color: #000000; font-family: Verdana, Arial, “Times New Roman”; font-style: normal; font-variant: normal; font-weight: 400; font-size: 10pt; line-height: normal } p { margin: 0px; }

As said before, not accurate, god looking though. Is that shield solid bronze? If so that guys a fecking monster lol

Roman shield style changed a lot over centuries; the rectangular shield was only used very late…

Yes but the 2 shields displayed were never used, although the 2nd is similar to a few of the variations used.

And the marisian shield wasnt used late. Who on earth told you that? from around 90-80BC (cant remember marisians reform date lol but the shield was in wide use a little while afterwards) until at least 150AD, and the roman empire lasted until 450+ AD (and a part of it till the 1600s IIRC in the byzantine empire)

Armor and helmet style even changed and differed between various units.

No they didnt, In the non profesional days it varied person to person (within guidelines) and in the imperial/ profesional stages it was uniform.

knowing what unit and when there can’t be made any definite statement about the correctness of the equipment.

Half of that is right at least. (when)

Thanks for the comments guys!
I’m off on another project now ,a Lamborghini.I’ll post some pics soon.

Hc00 = No. The shield is not solid bronze.It’s made of polygons and they weigh almost nothing.

I need to loose some wieght, maybe I should cut my legs off and replace them with polygons…

Would help my running too