A rose this time

I am modeling another flower, but I want to try to make this one better. I based it off of a flower picture online, so it’s not 100% creative modeling.

And the lighting sucks. It was just so I could see what was happening. I still have some more things to model in it before I get to the texturing. 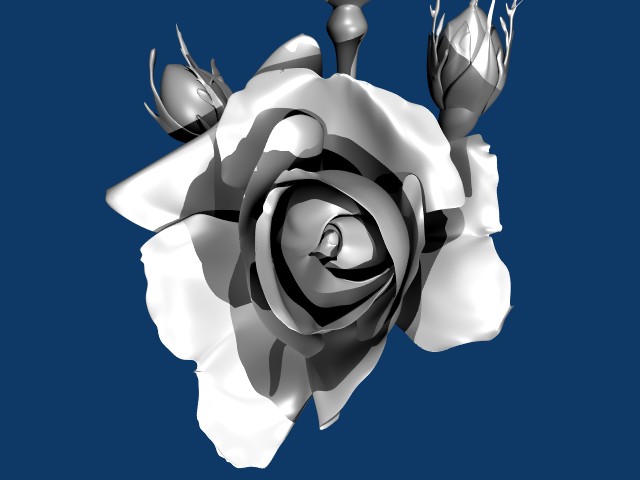 It looks very detailed already. Are you just using vertex or curves…or something? I can’t wait to see the finished
version.

Here it is a little bit latter. Just added another flower bulb below.
This is all standard vertex modeling. The only special thing I did was I wanted the stem in the top middle to be bent, so I used a besier curve to bend it.
Also, I used a Catmul-Clark subsurf at level 3.
Here is the picture I traced to make it with. 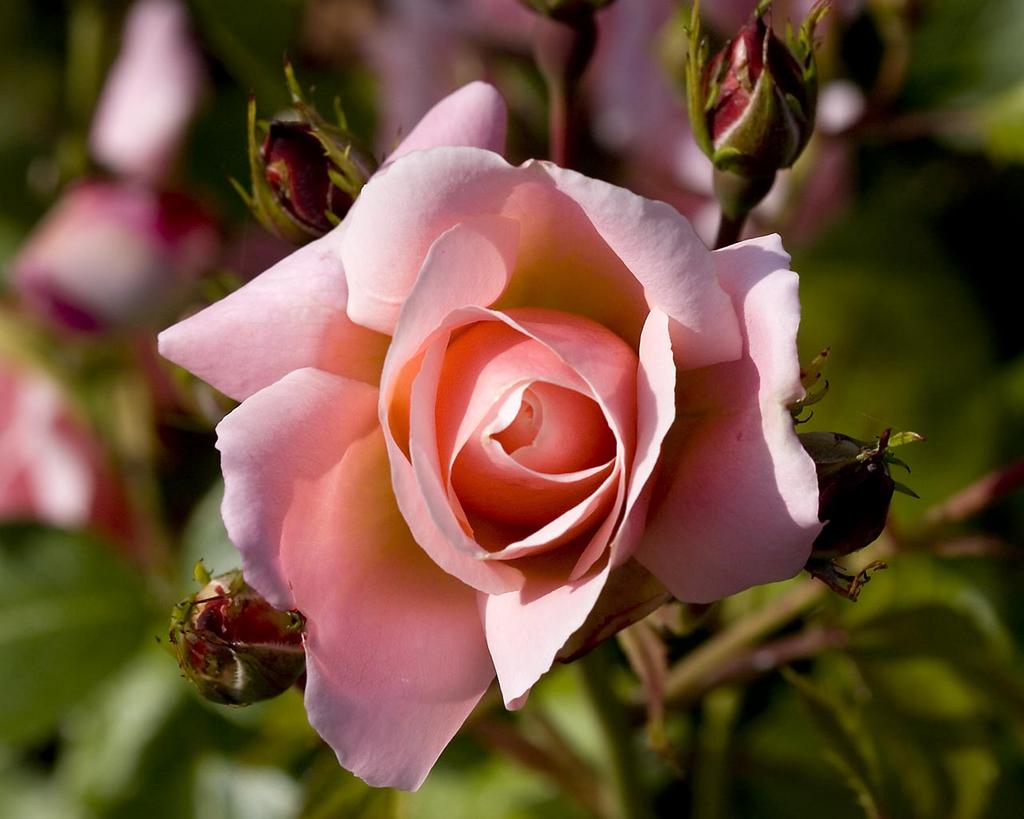 Here is my start at textures before I go to bed 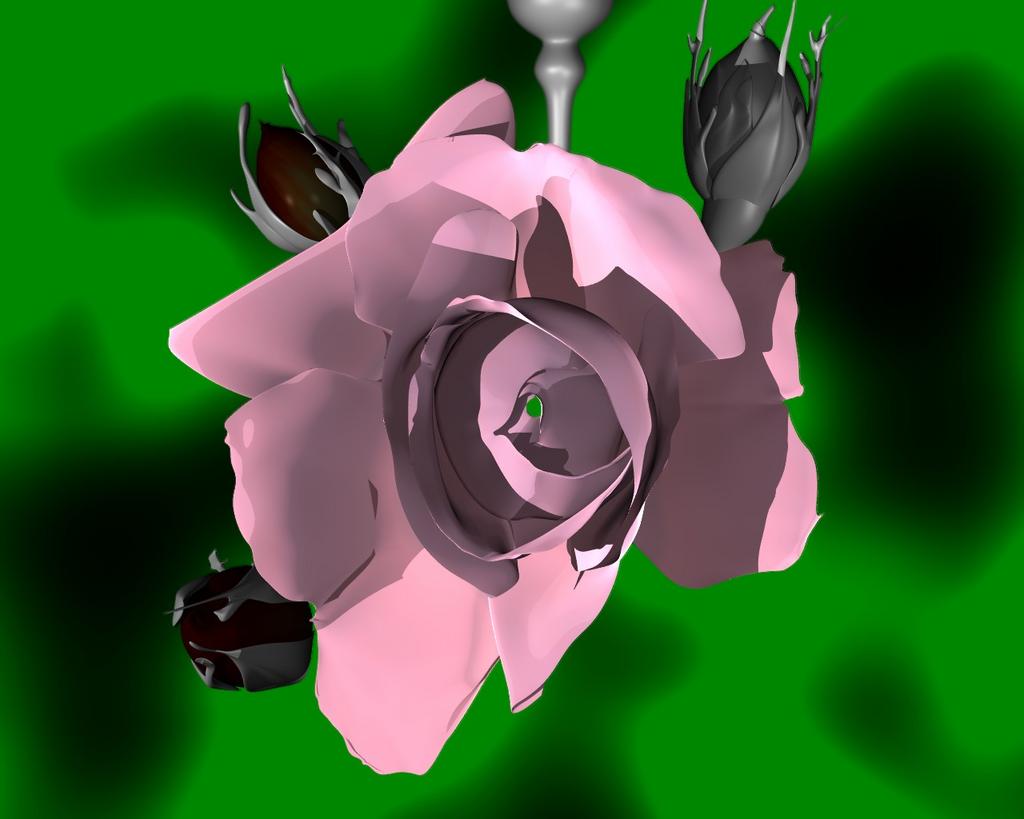 Good morning! That’s a beautiful flower.
Some feedback: It looks a bit like the petals are bending more in the photo than in your model, especially along the outer rims. I think this makes your flower look a bit like origami.

Are you considering subsurface scattering for the material? It looks like you absolutely should.

Not bad. Could we see some other angles than just the one from the photo?

I’ve been trying to get SSS to work, and all my tests have not worked out that well. Well, none of the tests last night worked out all that well.

Here is what I got so far. Not so sure about how to make the SSS work out better. Its not that I have anything against pink, its just that I don’t like pink, particularly hot pink. I’ll work on the sliders. 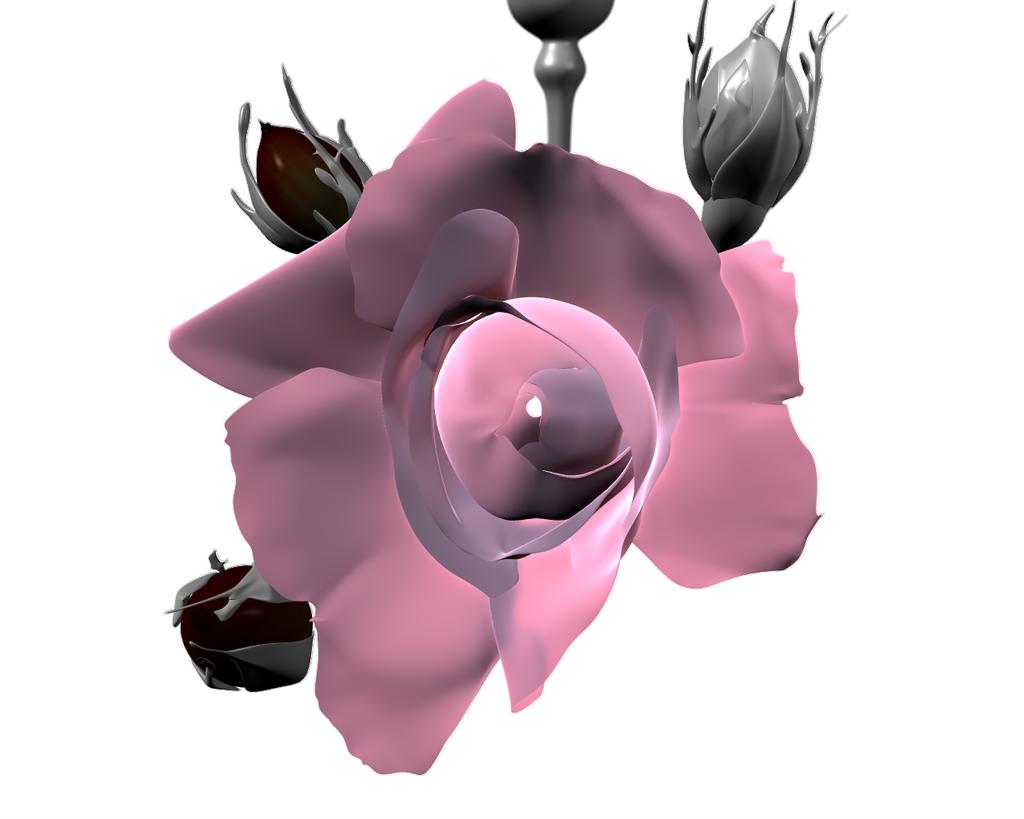 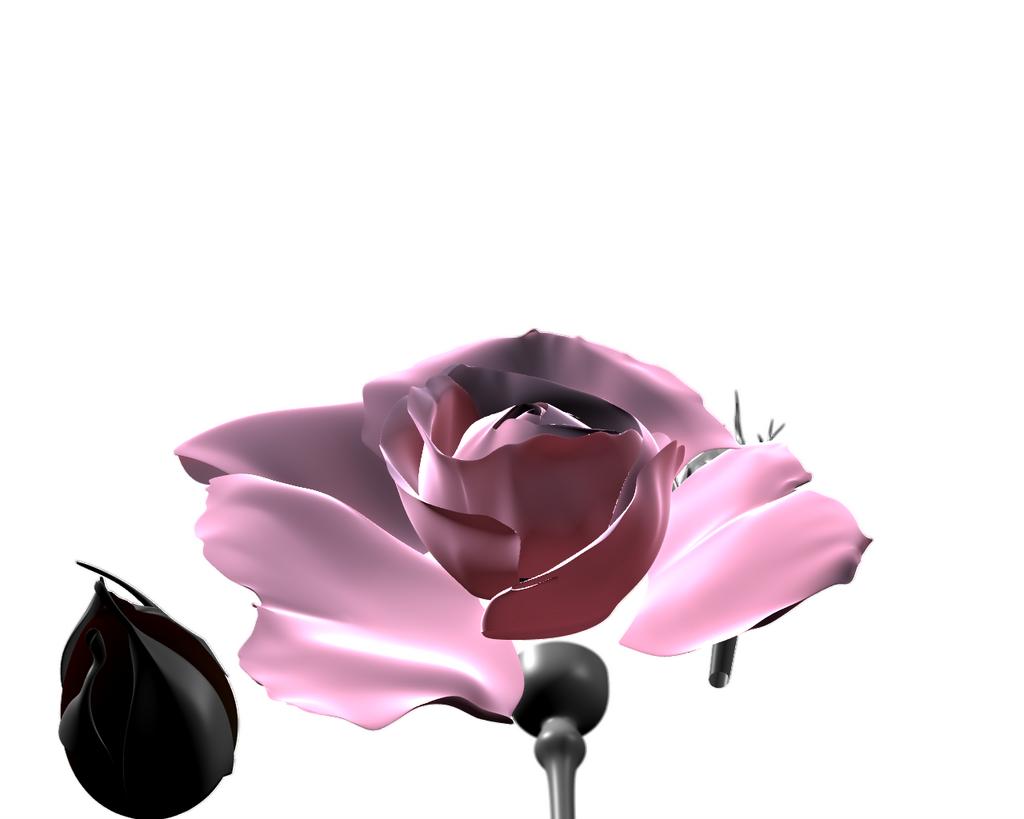 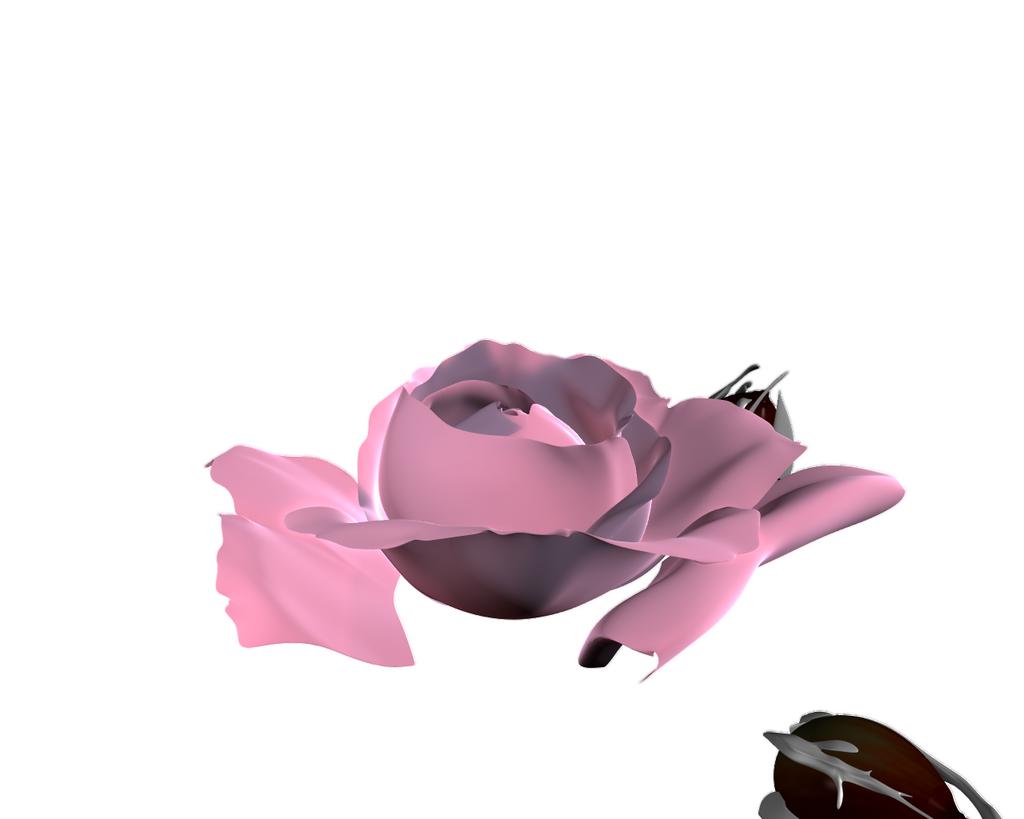 The Storm,
while I was doing other things I had my computer work hard today. However, I know less now than I imagined I did this morning. I just upload this last render I did to give you an idea. It’s a flower modeled in a few seconds using two array modifiers. (There are a few more samples on flickr.)

The only conclusion I was able to produce was that SSS probably only make sense inside objects, and, as petals don’t have a lot of volume, using SSS on a flower probably don’t make sense at all. (Please correct me anyone if I’m wrong.) Various settings in the Mirror Transp tab are probably what you need to make a good flower material.

Sorry if I caused you to waste your time on nonsense.
/ Mats

This thread looks quite interesting. I’ll be watching it since I always wondered how to make that leaf looking material. It should not be transparent, but at the same time it should reveal the shadows it receives on the other side too. :S Maybe it sound confusing, so heres a picture to show what I mean:

I guess you should use SSS, though I never managed to tweak the properties to make a similar effect.
Anyone interested in giving a try?

In other programs such as UT2K4 Map Editor, I noticed a feature where the lighting setup would create a specific texture on every surface with all the lighting and shadows pre-set. Then the map would not need any lights. I know it’s called ‘Bake’ in UT2K4 M.E., but Blender’s ‘Bake’ seems different.

Spockless’s image inspired this. I have no time to test it tonight, but will be doing this tomorow

Could, and I have no idea if this would work, make a brightness UV map of the leaf, then flip the side in which the UV map was applied? If so, the one side of the leaf that had been lit with the light would be put into a texture that I could apply to the other side. The texture could be applied as an ‘Emit’ or as a gray scale that adds to the colour to the dark side.

I’ll get on it tomorrow. The texturing I mean. Not the joke.

I have been working with some success.
What I did was make three plate and added a texture to the leaf. The texture was white and slightly transparent. I did the bake feature (see small note below) after I made a UV-unrwap. The transparency made the far side of the leaf receive light. :yes: woot, first success, but more testing needed

Next comes the harder part

Still, I have only been trying to get down and actually do textures to work for a month or so. Any tips would be useful.

Sometimes the ‘bake’ feature in blender (ctrl-alt-B) works according to the camera position. The shadows and transparencies are shown in the textures. Is there a way to make the Bake to only give shading to the surfaces and the camera have no effect on the texturing? I noticed this in particular when I had the camera below the leafs and I was rendering. 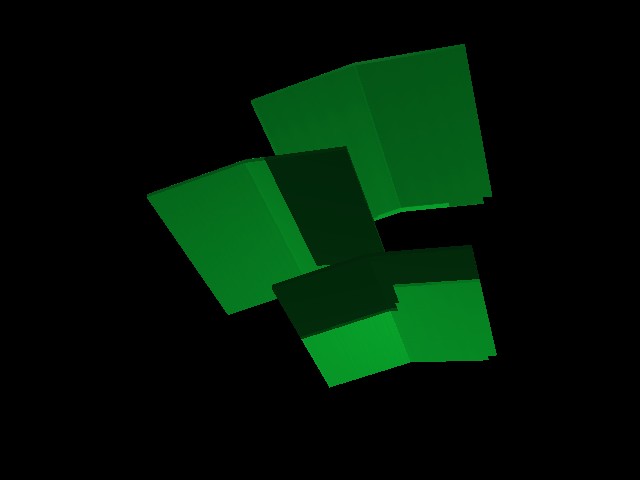 Note: the transparencies are created with Ray Transp

Vis. a person stands outside a transparent window and a camera is inside. The window is baked and the person outside is baked onto the window relative to the camera position.

Is there a way to make the transparencies only work with the light in the bake is my next goal.

If what I wrote before makes no sense, here is a small demo

In picture 1 is Suzane looking dashing as always, but he is seen through a transparent piece of glass.

In picture 2, the glass had been baked and the transparency removed, but the picture of the amazing Suzanne remains (Shock). 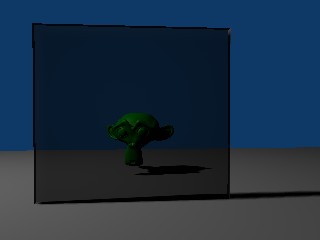 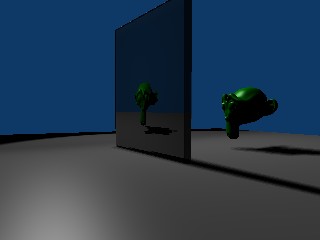 Here is about what is needed my render to do. I cheated to make this.

The first picture shows Suzanne staring through a slightly transparent wall.
The second picture shows the shadow created by Suzanne on the second sheet. 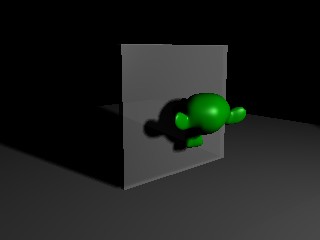 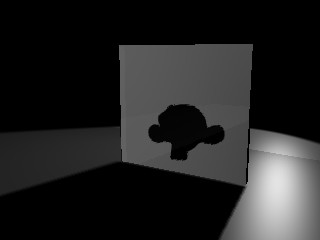 That’s looking great, storm! interesting technique. I already thought about that method but I never gave it a try, mainly because I’m interested in animation and it won’t work with it.
Though the result isn’t there yet. In your last example we can see the shadow of suzanne. But look at the ground. IMO the shadow should be lighter around the shadow of suzanne. (Sorry if i sound sound confusing :S)

Hey,
here we’ve been doing some real research!
Can I try this at home?

I will have to try anyway.

Spockless’ leaf example image inspired me to do some experiments, too. This is what I’ve come up with so far (excuse the world/materials/modeling):
edit: Just to prevent premature "WOW"s: The voronoi texture sadly does NOT contribute to the shadows… 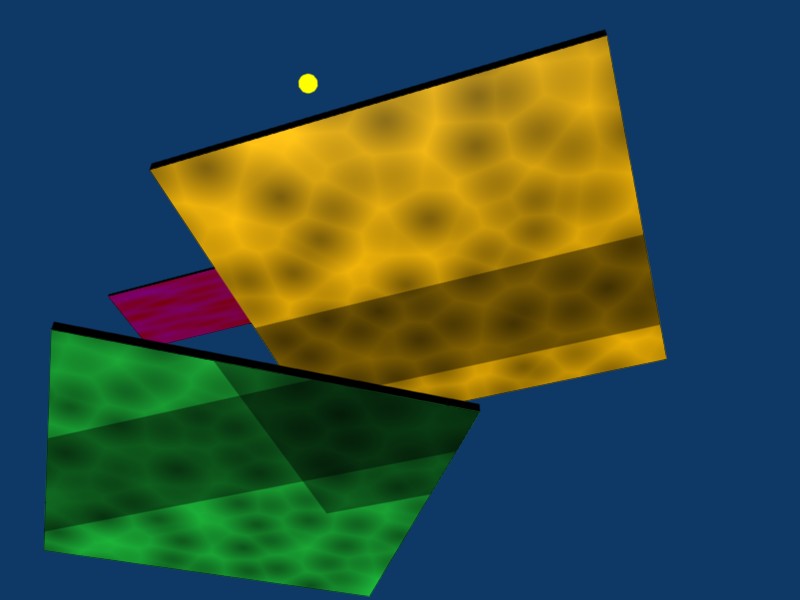 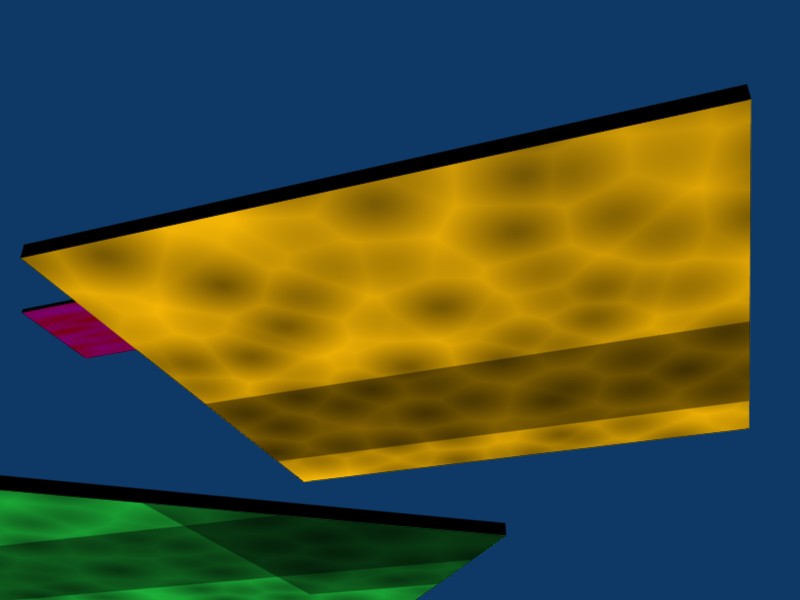 The technique involves special objects to ‘catch’ the shadows and some tricks with render layers. It’s animateable, but at the moment only works for faces facing away from the lamp. Still working on this (and some noodle magic to blur the shadows).

What do you think, is this something to investigate further?

It looks good… And I like the the way the shadows add darkness to each other on that green plane. What would happen if the light source moved?

These are real raytraced shadows, so when animating anything they work as expected. As a side effect this should also work with the new soft shadows, but I haven’t tried this yet (still working with 2.44).
It also works on any faces (not just the ones pointing away from the lamp) - the problem turned out to be a misplaced lamp ruining my shadow pass… duh! And btw these are cubes, not planes, so it even works on objects with volume!

Here are two short samples of it in moving action:

Testscene from above post - Lamp and red object moving
Suzanne behind the wall - inspired by Storm, Suzanne and lamp moving in turn and together

I still have to clean up the workflow a bit. Friday or so I’ll see if I can get textures to affect the shadows and maybe prepare a tutorial for the technique, if anyone is interested :eyebrowlift:

Wow. This is exactly what is needed. Thanks MPPIC

Next question:
How is it done? It looks great.

Then:
What does MPPIC stand for?