A simple arcadey game with simplistic graphics.
I’m quite happy about how it turned out.

Use arrow keys, you get points from enemies that fall of the edges. 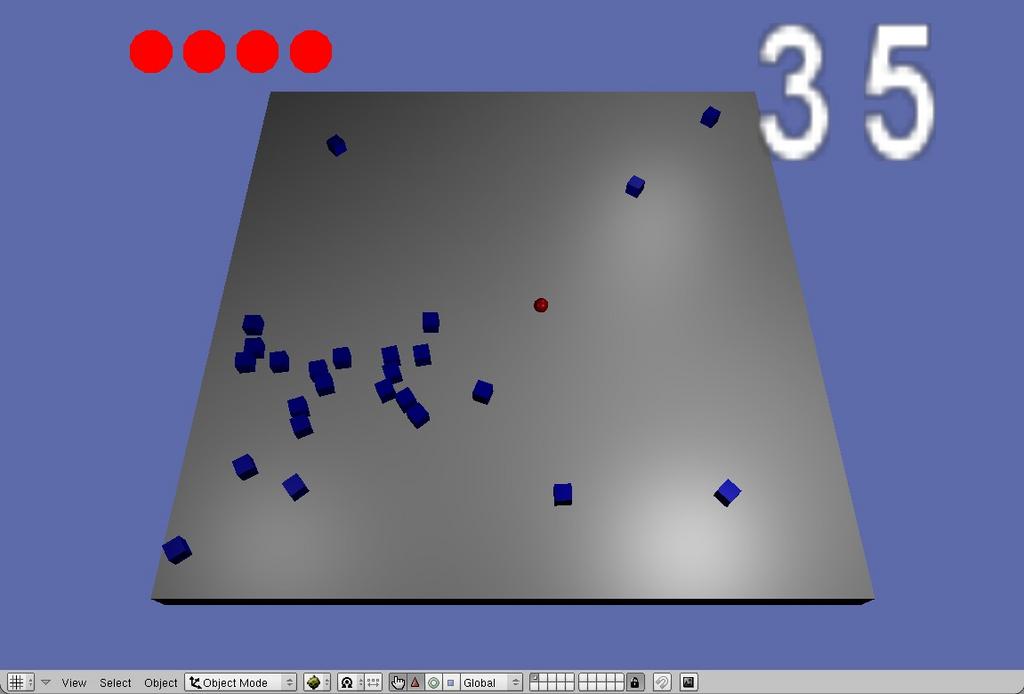 Dude. That is insanely fun! Like, that is one of the best simple blender games I’ve ever seen! Well done! I really like it

umm, for some reason i cant even start the game, all i get is the menu pops up. I tried enter, clicking, how can i play the game??

Try taking it out of GLSL mode?

Anyway, great game. my highscore is 59

Very simple, and quite fun- perhaps mouse controls would add some interest? Also, simple but flashy effects could be fun.

I cant play it

The menu pops up and I cant click anything. Also i get an error in the console

I like the simple controls, but gets a little boring after around 100 (High score 210). Are you thinking about adding different kinds of enemies?

ha aha nice game, my high score is 35… It’s not too simple, the gameplay is simple though… Very nice!

Ah, found out why it wasnt working; it decided to open it in 2.48. Fun game, simple yet addictive. High score was 76

I consider this a finished game, but I plan to make an improved version with all kinds of additions someday.

Does anyone have any comments about the logic/scripts?

It’s cool right now, although if you want some suggestions:

Still, very fun for a simple concept like that.

Oh man, and motion blur makes it insanely awesome… although it does add significant lag

What Name likes. You get an APPROVAL.

Wow, really fun to be that simple!

Edit: I managed 528. The trick is to travel in a diamond shape.

Lol, I got to 402. I would have totally gotten like a hundred more if one cube from that huge batch didn’t hit me. D:

This game is totally awesome, you need to develop it a bit more!

Great job. The first blender game I have ever played and I’m most impressed. In the next version, you’ll have to make levels or something, so the diamond technique suggested by Dayanto is not a ticket to a massive score. I managed 55.

Dude, I spent hours playing this game and Aspirin. :yes:
I think I managed to get 250 or so…