Whipped this up in a couple hours. Public domain.
https://pqftgs.net/downloads/games/Tetris.zip

I have no plans of further improvement, unless someone finds a nasty bug.
EDIT: Made some improvements 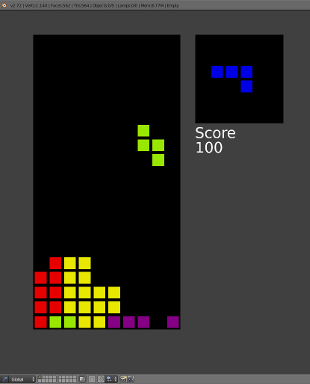 nice! feels like the good old days and i am still amazed about the simpleness of this milestone in game-art-history.

I haven played it, but I did play Tetris a lot as a young child, there should be a “drop” button, no?

nice! feels like the good old days and i am still amazed about the simpleness of this milestone in game-art-history.

Indeed! High level tools - such as blender - have given us so much power. It’s all quite inspirational.

I haven played it, but I did play Tetris a lot as a young child, there should be a “drop” button, no?

Ah, you’re right. I had actually started on that, but removed the code because it was so dirty. Completely forgot to re-do it.
Anyway I’ve added it now. Holding S will increase the drop speed. May not be 100% expected behavior, but I suppose it’s all relative to which version we played.

Thanks for the feedback. It’s quite a luxury to have a responsive community.

That’s cool! Thank’s for sharing. If you want to continue developpement, it would be nice to add a little menu to setup control keys. And maybe choose a music to play during the game:

EDIT: to loop the sound:

Hmm… good ideas!
I wrote the backend for saving/loading controls shortly after reading the post, but haven’t got around to the menu yet.
Funny thing you should send that song, as the GB version was actually what inspired me to make this.
Anyway I’ll finish those changes next time I feel like working on this.

Moving on: Today I had a bit of fun. Who would have thought a 30-year-old computer could run Blender games?

Nice Job! I bit coding this was kinda daunting. Well I guess if you are good at python than it would not taken to long. However, I not good at terrible this would have taken me days or weeks to create LOL =)