Hello, this was a something I completed a month and a half. I upload it for you to give your opinions.
Thank you 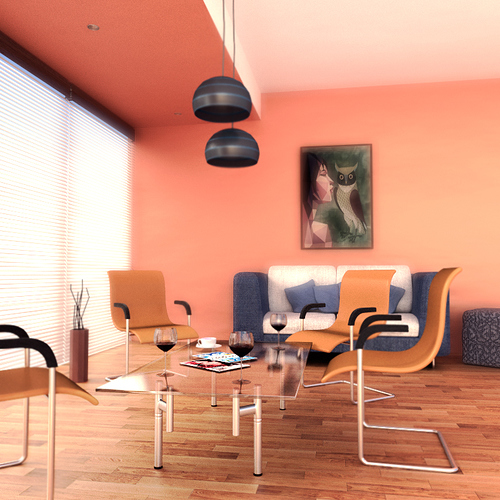 The image is pleasing for me, nice colors, lighting and atmosphere.

The sofa here make no real sens. Either I will move the table in front of the sofa and the chair are extra chair aded for the guest or I will remove the sofa.

I have no idea why but the chair in the left down corner keep saying to me " I dont belong here". Maybe it’s the strong black and white contrast it makes with the windows but I’m not sure.

I think your lamp are laking some polys / subsurf they arent perfectly rounded.

The strange dying plant in the left is too angular and not on lvl, modelisation wise, with the rest of the scene.

Hello Androol. Thanks for your points. I did a new render but just erasing the chair on the left, moving a little the camera, the table and the rest of the chairs trying to balance the scene a little more. Next render I will remove the couch and place there a desk with a computer, books, just things like that. I think the scene looks better now but it would be nicer to read your opinion. thanks a lot 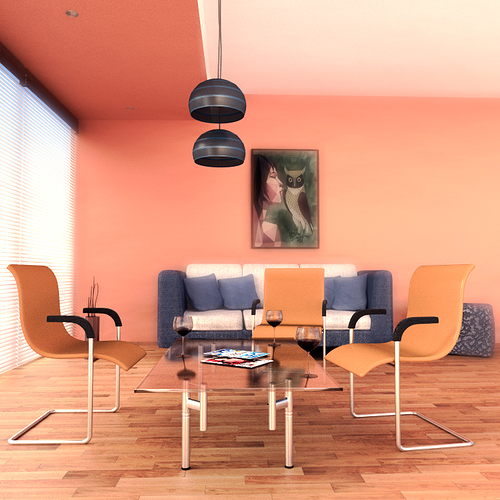 My first reaction was too think the camera position was more interesting before.

After comparing the two 2 or 3 time more I cant realy tell anymore. The new one as its interest and you may be right that its better.

On the new image, as you’re trying to balance it, the lower half is balanced enough, but the higher half isen’t.

Moving the painting on the right may prove usfull as the center of the image as already the lamp too look at, the left is strong with the ( thing on the window that I dont know how to name in english O_o) and the two lvl of ceiling. The right high quarter of the image looks like the poorest area now with nothing to look at.

Maybe moving the lamp to be on top of the table may make sens too as It is logical to have the table under the lamp and it may help the unbalncing of the top and the readability as its now a little bit mixed with the lvling of the ceiling.

Not been a pro, I can’t realy say if this will work without trying, ( and maybe even after having tryed lol) but that’s where I will make change for balancing purpose I think.

I’m not an architecture expert but I’d like to put my opinion as well (if it has any value :p) because I like the overall picture.

The first camera position is way better I think. As Androol said it, it was more balanced before. The upper right corner is indeed too empty, but I’d try to explain what I don’t like in the new version :

I have a few more remarks, the plant would be prettier if it was a green plant with leaves, it’s not very pretty currently.
The glass would look more realistic with a little less roughness. Glass is never perfectly reflective, however maybe it’s too much. I’m not totally sure about that though.
Also I doubt of the table stability with such legs, but maybe I’m wrong and it exists like that.

Looking forward to seeing next versions