Okay guys I think I’m finally ready to make a game.
Here’s the story-script and please note that its copyrighted and I don’t want anyyone to copy this
The main character is going to be Riotaro Rizuki who belongs to the Rizuki ninja clan and all the Rizuki members have black hair. The ninja are all humans but there are two more races called the demonic beings and the heavenly beings. There’s going to be a huge war between these three races to declare supremacy and Riotaro (his friends call him Rio for short) as the heir of the Rizuki clan has to lead the humans. Now the Rizuki clan has a contract signed with the five elements-fire,water,earth,wind and lightning; so Riotaro being the heir has to go to each of these elemental dimensions to master the techinique and get the elemental weapon from each dimension. He’s doing this to get stronger so that the Rizuki clan can win. He has to fight with monsters in each dimension and after beating the elemental monster he gets a tatoo on his body which allows him to control that element. For example he first goes to the fire dimension and after beating the dragon lord there he gets the shadow dragon sword and a black dragon tatoo on his right arm which allows him to summon the Black Fire Dragon and decimate his enemies Have i mentioned that he actually has to rip out the right arm of the dragon lord to gain the tatoo? He goes to the other dimensions as well and gets similar powers.
Now Rio according to true anime-style actually has both demonic and heavenly blood inside him which manifests itself in moments when he is about to die. The heavenly beings are all blond-haired and Rio’s hair gets streaked with gold when his heavenly blood takes over. Joining him in his adventure is a hot girl called Kara who’s also a Rizuki clan member though indirectly.
That’s as far as i got, folks. After i make the first five levels for the five elemental dimensions I’ll update the story.
And please once again do not, i repeat do not copy this story. :o

Okay I need help…Anyone interested in Final Fantasy Tactics Advance and Disagea?? Also maybe Tactics Ogre? Well I want to make this game like that. But I need help. I need-
A character and landscape modeller
An animator
A Python scripter and BGE game engine expert

I can do all the three above but it takes time…So please join this project!! 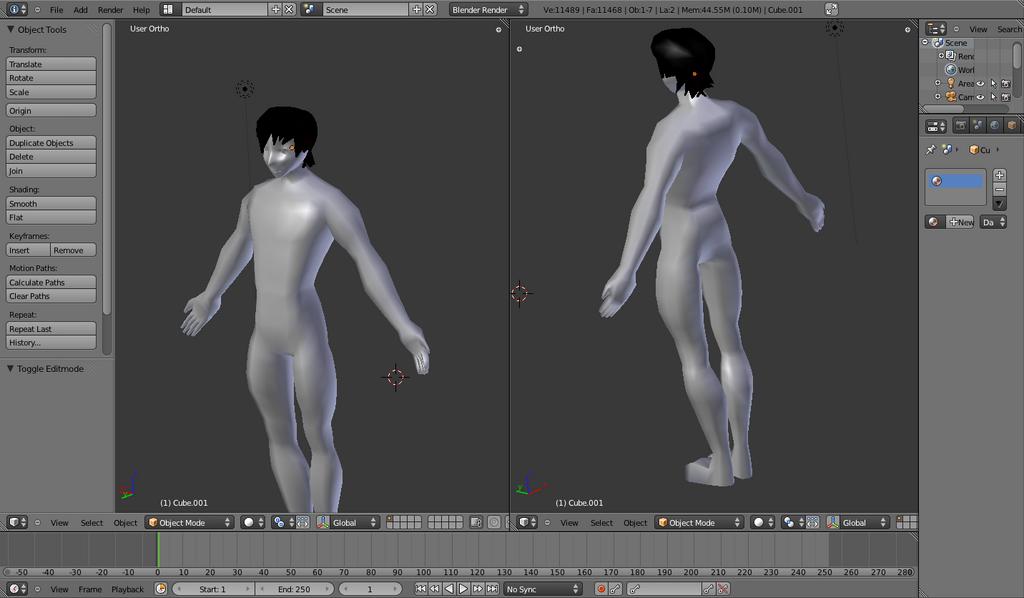 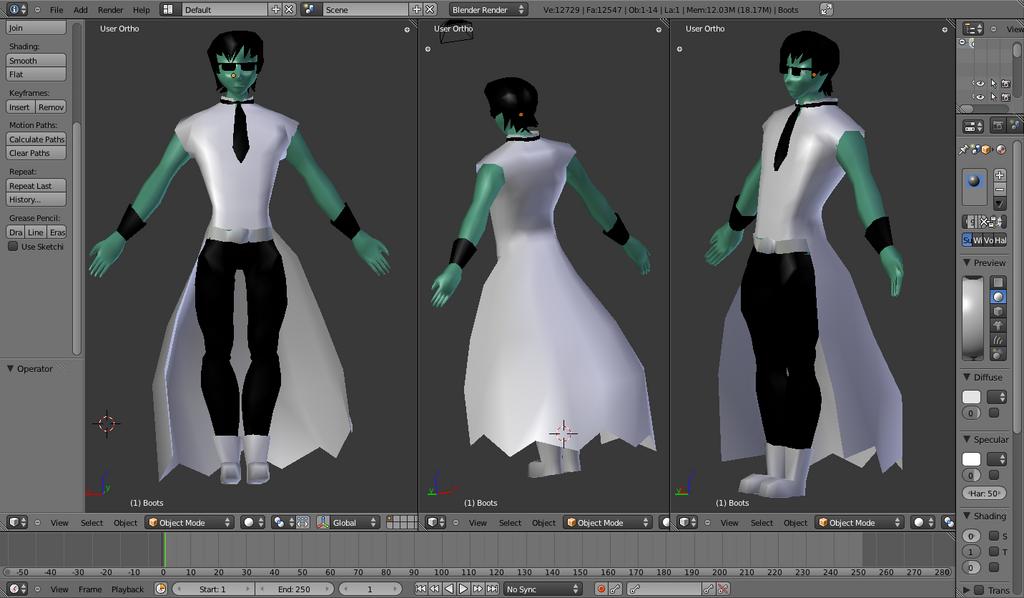 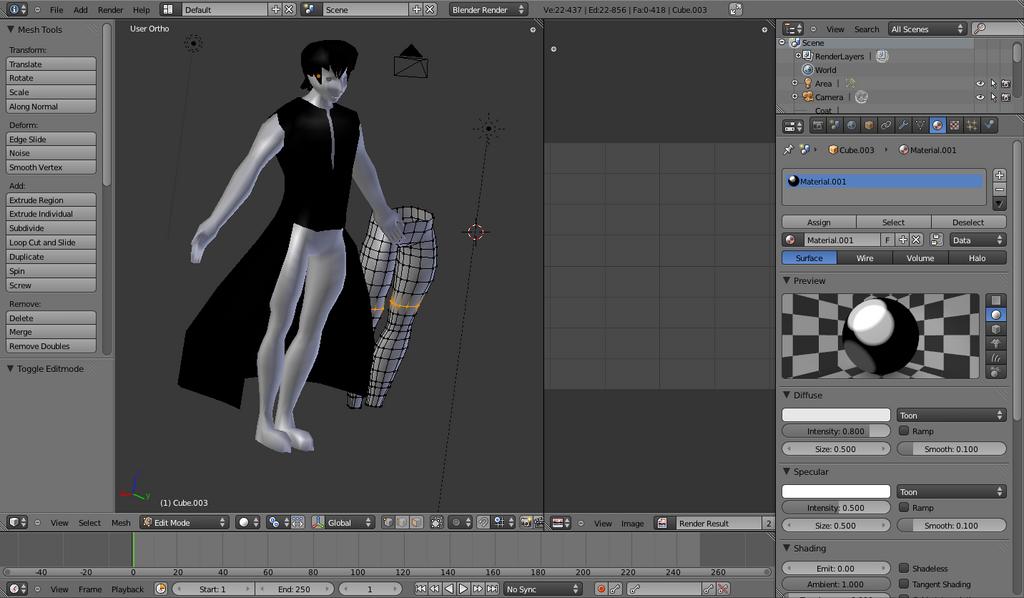 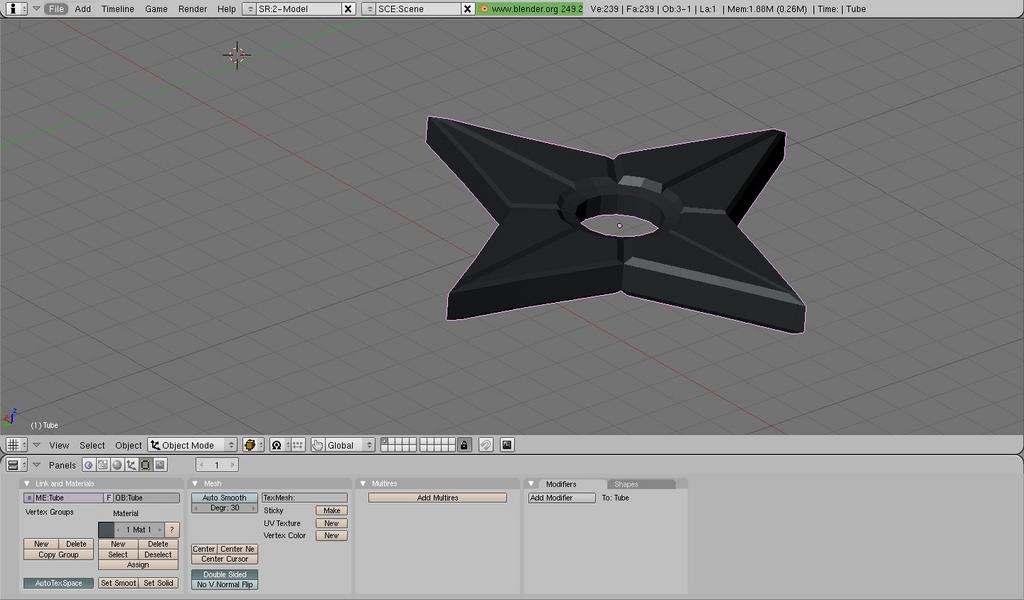 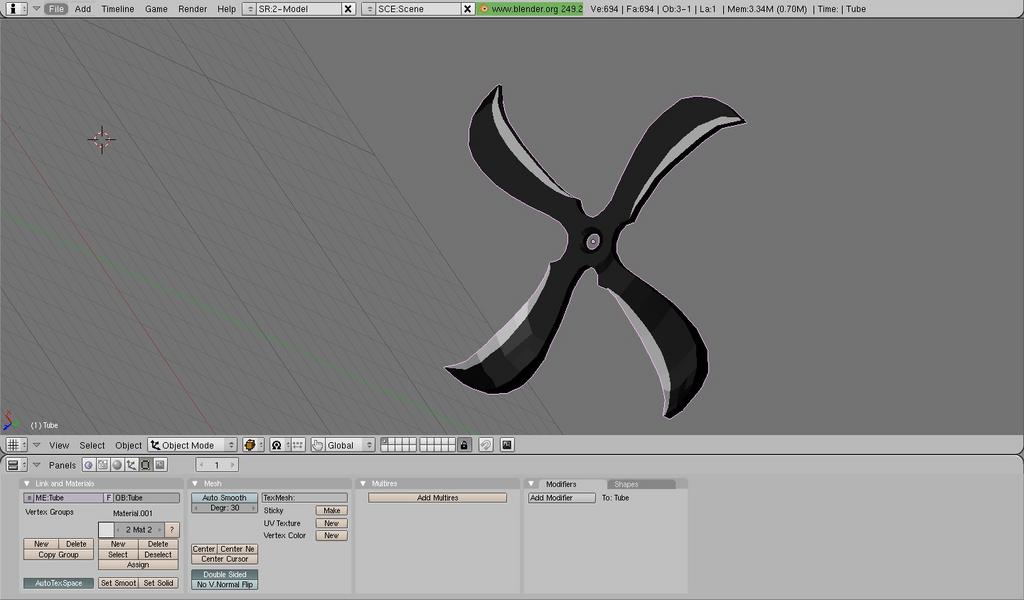 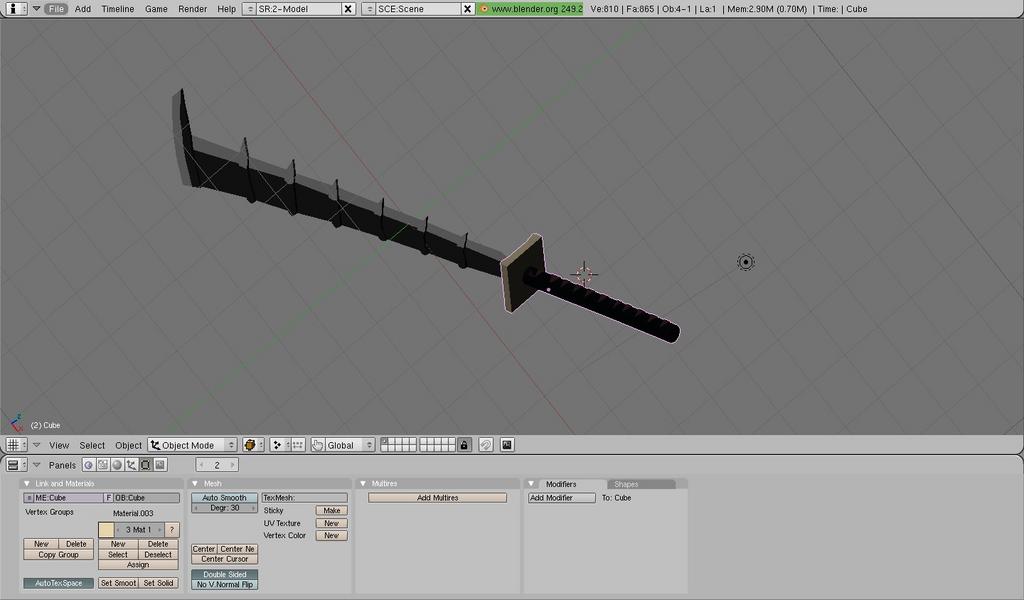 Great! A ninja/Anime based game. Your story resembles a bit of Avatar! " Do not copy?" Isn’t that Zabimaru I see in between your swords? You can’t copyright copied stuff! |n any case, most if not all stories are based on others. Even the very first stories, are based on events and stuff. In any case, your story is interesting! What’s the game genre? RPG? The vest I see on the guy, isn’t very ninja like, it’s more Darculish! And the tie+ sunglasses? Makes him look weird! I think you need to look up for more references. Ninjas don’t wear vests, specially long ones, since they need to optimize stealth. Your story would also be more fitted to samurai than ninja, warrior VS assassin? But hey, it’s your own game story, is totally up to you to decide how this is going to be! Good luck then! Keep the updates coming!

First of all. Just looking at the human model. Though very well made. It’s way too high poly. Second. You can’t just say “This is copyrighted”, and it is. Third. I could (not that I want to) change the main character’s name, and the name of the races, but keep the story basically the same, and there wouldn’t be anything you could do about it. I like that you’re dedicated to your game enough to want to protect it though. We all want our stories to be original, but don’t worry. No one here want’s to steal anything from anyone.

So. I would suggest lowering the number of faces on your model. Not worry about someone stealing anything. And I agree with Torakunsama. I’ve never seen a ninja with that attire either, but it’s your game, and you can have it however you want it.

Keep going. I want to see what you can do.

hows 11k too high poly? Whats the point of playing with squares? xd

Yes, I saw that after submitting the message, and then I slapped my face… Well, I had to come home so…

hows 11k too high poly? Whats the point of playing with squares?

It is high! Unless you are going to just use that model! If you use too many high poly models, your rasterizer will quickly be overworked…
That’s why, you need to go low with the polies!

Doesn’t happen to me XD

Doesn’t happen to me XD

No? Add some bones and animations, then try again. I advise you to use make a lower poly model of this and put normal maps on it, it wil basicly look the same

Seriously, 11k not high? The poly count of Niko Bellic probably isn’t that high… Your character is just subsurf’d a couple of times, you could drop atleast 80% of the poly’s and it would only look better. Characters like this should be around 1500, maybe 2500 (which is still very high).

I have a human model (my first successful human model) that looks relatively serviceable that’s something like 250 polys.

Thanks guys!! Its good to see so much enthusiasm!! And I know he’s a bit high-poly but I did it intentionally. I want the main character to look extra good. The rest of the villains and props and buildings will have a maximum of 400 to 500 poly.
And yes that’s zabimaru, I’m not planning to use him in the game. I made him just for fun.
The clothes are a bit funny I know but this is a rough draft. I’m making his clothes like anbu kakashi from naruto. You know when he’s young? The clothes look very cool.
I’ll keep updating. I’m making a mud golem now. Should finish him by today.

So. Is this game going to multitexture, or glsl? One thing you must consider is that your character will be on screen at all times. Therefore the GE will have to render that. You’ll figure this all out when you get deeper into development.

Turbomonkey, I’ve no idea what you’re talking about.

I’m a noob. Started modelling and blender a month ago. I’m learning as time goes by with experience so decided to try out this game.
Here’s the mud-golem. I know it looks crap but i had no option, had to make it around 500 vertices.

OK. You don’t have to go that Low Poly…lol.

GLSL, and Multitexture are two different material, and Shading type settings for the Game Engine. I would just search around for that. It’s kind of complicated (for me) to just say what it is, but you need to figure out which one you want to use before you get too far, as GLSL uses more CPU than MultiTexture. Which means your game run slower.

Basically as the others said. You will be ok with about 1000 Faces with a model. So you can give your Mud guy a little more detail than you have.

This is an Alien for Mid Drift. It’s about 1200 Faces, but if there isn’t too many of these guys on screen at one time. Then it won’t kill the Frame Rate too much.

It’s looking good for you not using Blender for very long though. 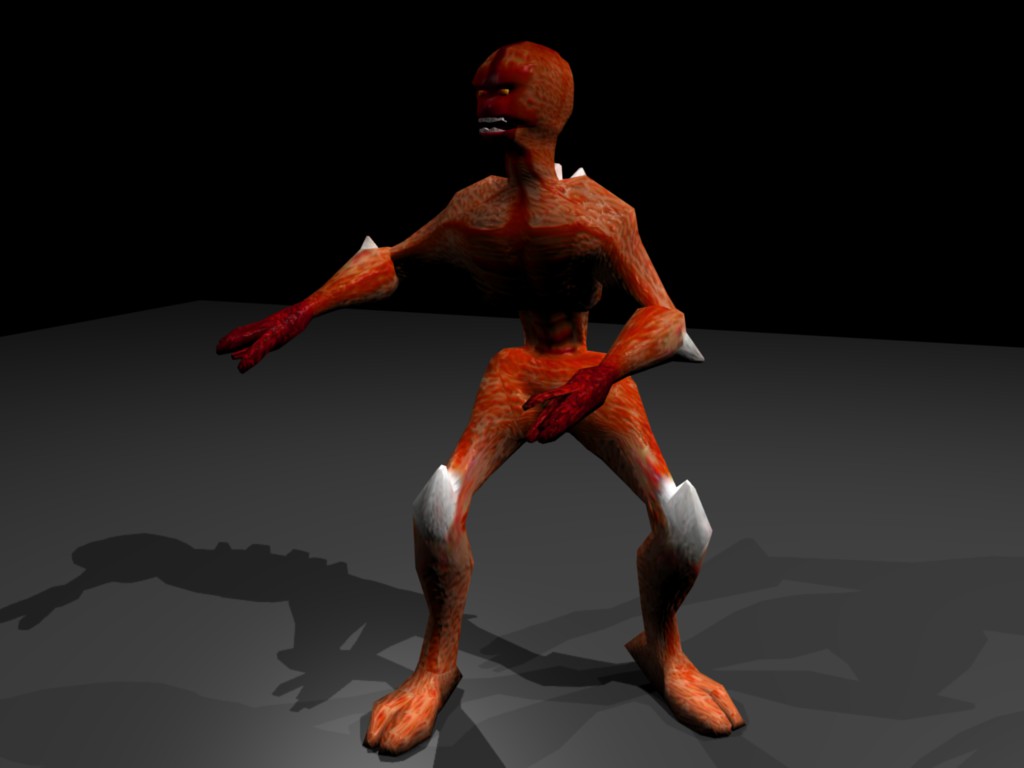 I hit 12000 vertices then 500, lol…I need to find a balance…Okay I’ll make my next model, a skeleton warrior with about a 1000 vertices. I think I’ll have to do the mud-golem again, it looks like a shapeless blob. Anyone interested to join this project? I need another modeller and a good concept artist. Also a game programmer who has experience in either Unity 3d or Unreal Development Kit. Please contact me if you’re interested!!

I’ve half-finished the skeleton warrior. And its not looking that bad considering its got only 600 vertices. I think I will need another 600 vertices to make the clothes and weapons for it…I’ll make several different version of the warrior, black-mage, swords-man, archer etc

Update- He’s done…I tried to give him a samurai-style look. And that sword is actually Kenpachi Zaraki’s zanpakuoto to all Bleach fans.

And he’s just 1000 vertices!! Next I’m going to do a variation on this skeleton with a cloak and a staff to make a mage. 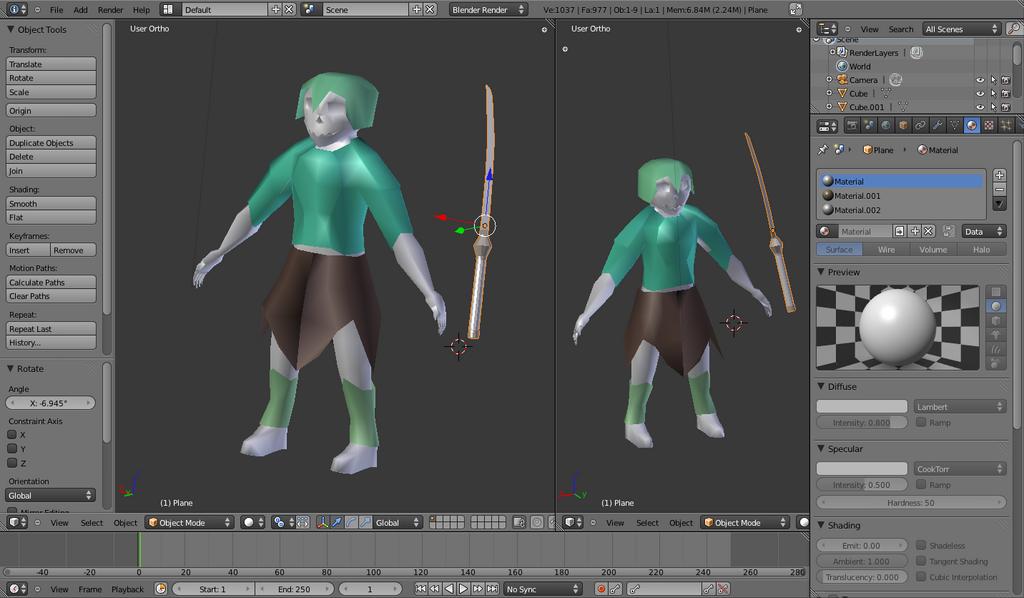 Okay finished the black-mage…And its not that bad…Now I’m going to make a few low-poly houses and the landscape.
Oh and I tried animating the skeleton and its pretty cool. The rigify add-on in Blender 2.57 has fingers and everything so its pretty easy to animate. 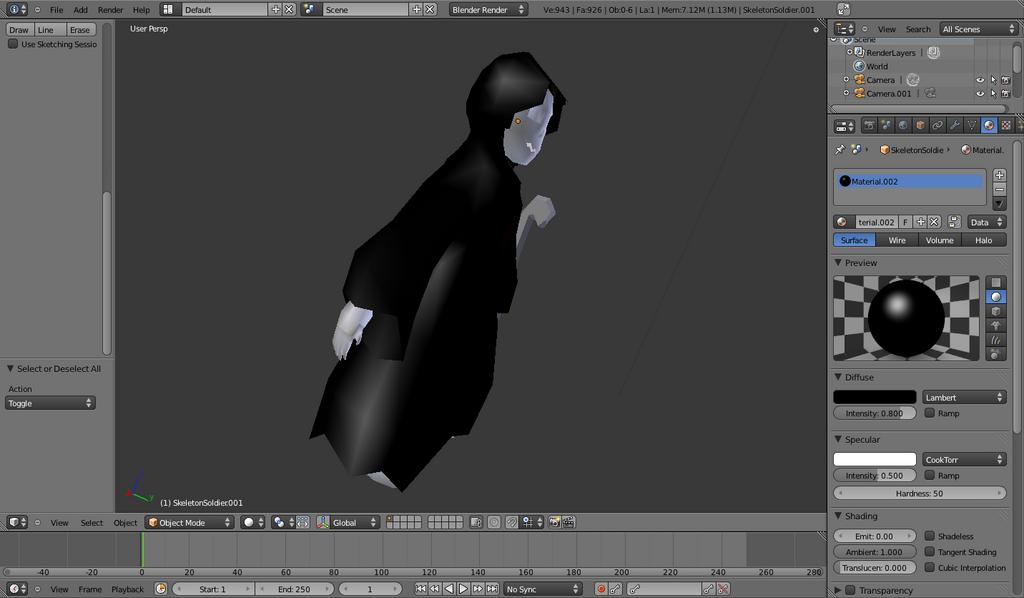 I’ve decided to make this game a turn-based strategy and so it’ll be like a tactics advance game…Anyone here played Disagea or Final Fantasy Tactics Advance IV?? Those were my favourite games so I’ll make a huge inventory of weapons and items and then port it to IOS, Android and to Facebook. I’ll use Unreal Development Kit. And yes I know I dream big.