A technical hallway inspired by "Alien"

I’m rather new to Blender and still learning a lot. I’ve been using Blender 2.49 for low poly modeling, but recently I switched to 2.5 and finally decided to create my first ever bigger project.

The choice was rather simple. I’ve always wanted to recreate the hallways of Nostromo towing vehicle from “Alien” (directed by Ridley Scott and released in 1979). Below you can see the current phase of the project (phase 3). Most of the models have materials or textures applied, however there are still a few that need some tweeking. Particularily the ceiling is a pure clay model (no materials nor textures). The right side of the tunnel is still under construction (it’s already modeled but not textured).

The lighting is currently more a test then a final version, so many things are about to change in a couple of days. I know it’s dark, and it should be to emphasize the gloomy atmosphere of the ship. In future I plan to add however a bit more light in the front view. 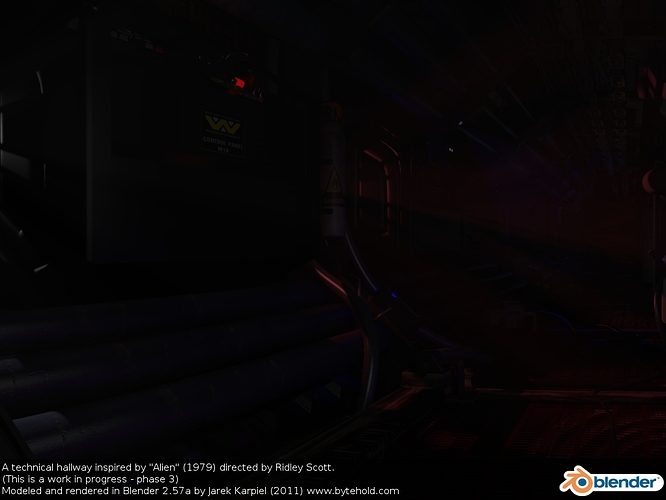 it’s so dark i can’t see a thing

Yep. I know. That’s why it’s still in progress. Additional lights will be added on the right side of the tunnel. I hope to do it in the upcoming days.

I’ve updated some lights to show more details of the left side of the tunnel. There’s still no textures on the right side. 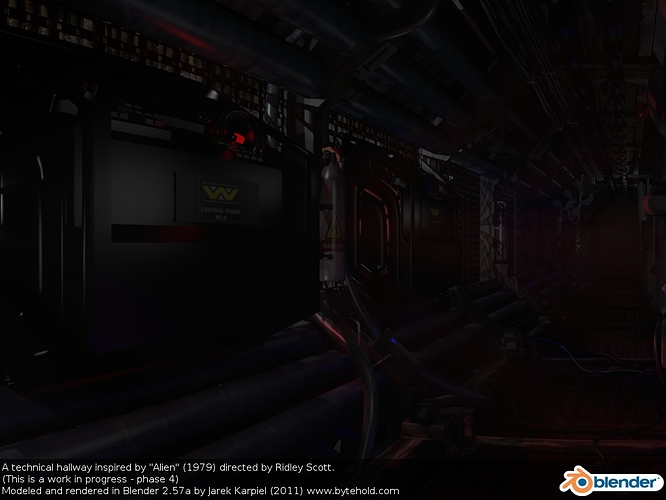 Nice work so far, but it’s still hard to see. I get that the film is dark, which is the point, but there is a lot in that film where the dark is broken up with shafts of light (which I love) and smoke, etc.

Didn’t seem to find any good refs without going to fetch the dvd, load it up, get a screen cap…

My point is that the volumetric light, smoke and other effects are not only very cool looking, but allow for brighter parts of the image while still keeping it a very dark scene overall. It also gives a visual reason for rim lighting on the edge of objects to define forms, that little red light in your image would illuminate a chunk of smoke and give some nice glow, etc.

I’d recommend compositing in some other elements or painting some of this over the top in Photoshop/Gimp. Volumetric stuff ‘can’ be done in Blender but for a still image it’s often more effort than it’s worth.

I probably got a little carried away but did a paintover with some related suggestions, doing my best not to alter the mood too much. Hope you don’t mind. 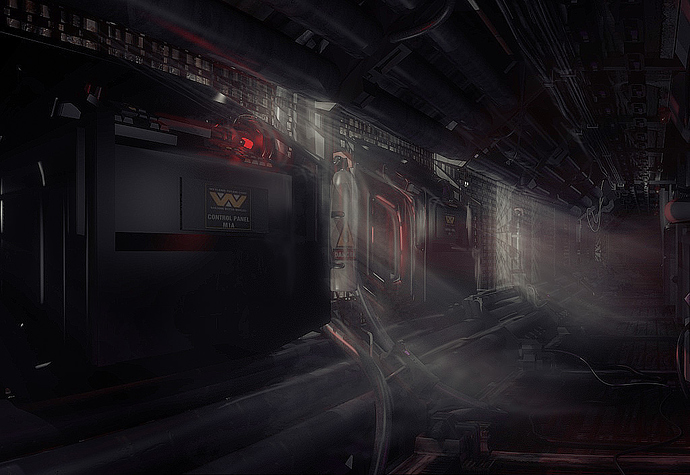 That most recent render blew my mind. The detail is outstanding and the lighting makes me feel like I’m back in the theater when I first saw Alien on opening week haha. 5/5 *s… how in god’s name did you manage that much detail xD

Nice work so far, but it’s still hard to see. I get that the film is dark, which is the point, but there is a lot in that film where the dark is broken up with shafts of light (which I love) and smoke, etc.

I know that Ben, but that’s why it’s a work in progress. I like your paintover and it’s actually pretty close to the final effect I’d like to achieve in Blender. I’m showing only the left side of the hallway, but there will be some lights (I guess) on the right side too. I plan to add more light this way.

Volumetric smoke and light beams plus some dust in air is what I’d like to add in the final render.

Yeah, I’m never quite sure what level of help to offer in WIP as opposed to Focused Critique. The paintover was fun though.

very similar to how i remember the films

Yeah, I’m never quite sure what level of help to offer in WIP as opposed to Focused Critique. The paintover was fun though.

Every reasonable critique is welcome. Once again thank you for your interest in my WIP and your paintover. It’s always good to get some help or advice from more experienced users.