Here is my temple.
what should i change/remove/add 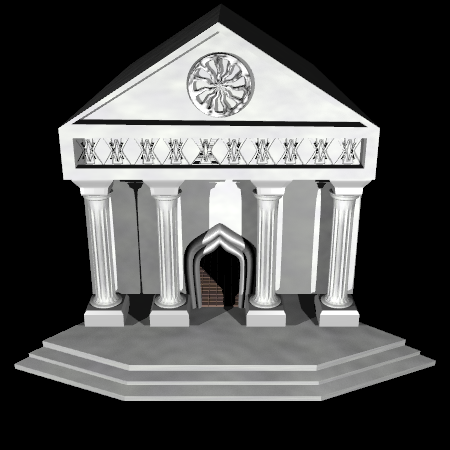 look on this texture tutor http://deeppixel.uw.hu/tutorials/realistic_walls.html

You could start on opening a book on architecture.
What is is supposed to be? Greek, Roman, Renaissance, Barok or looking at that gate Arabic?
Renaissance and Barok buildings are immensely detailed so I’d go for a Greek one. They’re also detailed but you could blame it on time.
If I’m not mistaken they didn’t create round windows at that time.
It’s typically Gothic and also used later on.
Greek gates were straight. No detail, straight.
Gothic gates ended in a point, similar to your gate. But with an outward bow no outwards and then inwards. That’s Arabic, but your gate doesn’t really look that Arabic somehow.

The pillars leave no more room between the building and the pillars,
so I guess they’re too big anyway.

If you want to skip all that and make an non-realistic temple I’d only try and change the gate.
Find some nice marble textures. Even though that’s historically incorrect too :]
P

it is just a temple.
changed some textures and materials.