Ok, for the last four months I’ve been working on one of the main characters for my video game. Now I’m a little new to 3D texturing, and I think I got the hang of it, but I’m having problems giving my character some depth.

Here’s a picture of my progress.

I also attached a copy of the UV map that I have so far.

Now I like the shading I’ve done under the eyebrows and around the chin. (Please mind the seam on the underside of the jaw, that’s actually where the texture seam is at and I haven’t shaded the neck yet.) Also I’ve added a hint of pink on the cheeks and lightly colored in some highlights. Don’t worry about the black fringes at the edges of the hair. Those are supposed to be transparent, but the effect is not rendered in the editor here, only in the game engine.

The big problem is I can’t seem to make her nose stand out. Everything I try makes it look like she has a grubby face. Now there are some challenges. First of all the model is symmetrical. Anything done on one side is automatically done on the other. I can’t have a shadow only on one side of the face.

Can someone point out a way to make this look like it has a little more depth. How should I shade the nose? Can you also nitpick at other glaring issues you see with the head?

Oh, also, this model isn’t for the Blender Game Engine, so using Blender to light my model will not be helpful here. I export the mesh and UV map to something else as my final step.

(The game BTW, is an adventure game that teaches Japanese. Kaori here is a Japanese girl you are stuck on a deserted island with after a disaster at sea. She can’t speak English and you can’t speak Japanese. You have to learn to communicate in order to have her help you survive on the island.) 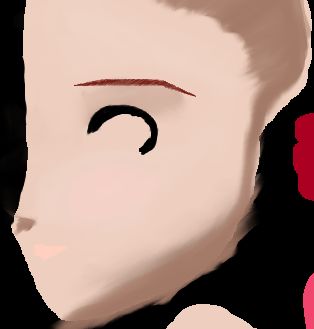 Sorry for the double-post:

After fighting in another forum I’d thought I’d add this. The engine I’m using does not do dynamic lighting, so I must paint the shadows on the UV map. I’ve had about five people tell me to “let the engine handle the shadows”. I can’t because it doesn’t.

What if you went lighter instead of darker, like this:

That’s just a lighter flesh shape for the nose, then blur the layer and mix at partial opacity. On a second layer I also did a little darker flesh outline and blended that at very low opacity.

Are you doing your painting in something like Photoshop? If so it can be easy to paint a highlight or shadow on a new layer, blur, and blend at a desired opacity. Good way to add gentle highlights.

Yes, and you can go lighter on the chin, top of top lip, and the forhead, and the high spot of the cheek bones.

You might try setting up your lights in blender, anyway, then bake the the AO and use it in a layer for your base. You can make it semi transparent so it isnt so dark, etc.

It will help give the texture depth.