I wake up on Monday, it’s 12AM and I can’t sleep, even though I was only asleep for about an hour.

So happily, I wake up and get to working on some projects, I play a few games and listen to music the entire time doing so.

By the time I become tired enough to sleep for energy for work, which the same night I had to work 8PM-12AM, it was 6PM.

,I need a bare minimum of 12 minutes to get to work, so I usually try to leave 30 minutes prior for traffic conditions and not wanting to speed WAY over the speed limit.

After waking up and nearing completion of the process of getting ready to leave, I realize my wallet isn’t where it’s supposed to be. I frantically look all over my tornado of a room and find nothing. Wasting so much time I met that 15 minute minimum time to drive to work, so I didn’t have a choice, I had to leave without my license and what I didn’t think of was the even greater consequence of leaving my wallet behind, my house key, which I used to keep in there. So I rushed off to work but once I got to a critical street that takes up 90% of the drive there, construction was so prevalent there was only one single lane of all three available for use, which was the far right turning lane.

This meant I was stuck behind all those insanely slow reaction time drivers that make reacting to a red light turning green a process as slow as getting out of bed on a Monday, which is further shameful when they have a huge line of cars behind them including myself who need to get to work on time and have significantly weaker engines yet can still outlaunch these “Sunday drivers” by tens of seconds.

Annoyingly, we were all stuck behind some bozo in a Prius who refused to exceed 20MPH on this 35MPH street, making all of us, even the biker in front of me, facepalm the whole way there.

Finally I got to my turn needed for going to my work, and I was free from Mr.Slow’s jaws. I immediately kick it up to something well above 45 on the street that was in fact 45MPH, and whizzed through lanes passing all of the Sunday drivers, and even angered a Mustang who wasn’t happy to be passed by a Geo which looked so slow.

Sadly for the Mustang driver, I already was at my final turn to get to work, and he lost the unintentional top speed and acceleration battle.

So I run in and make it to work on time, and complete my 4 hour shift until closing.

At this point the exposure to the cold windy weather was taking a toll on my cold that I caught a few days prior, and I really just wanted to go home and sleep, especially with the lack of sleep.

I crawled into my car, and drove home… Or so we expected it to be that simple.

No, even though it was nearing 1AM and the roads were growing empty of traffic, me and another driver got stuck behind a lorry in the long single lane road of construction.

This truck was so slow, it made the Prius from earlier look like a race car driver.

So me and the angry sedan kept slightly swerving in the the cone blocked left lane, to check if we could overtake the dammed truck.

On my third check, I noticed something bad.

Yes, it was closer to the previous cone.

So I attempted to swerve back into my lane and dodge it, and I did for the most part, but…

There was a smack, and a shatter of glass. 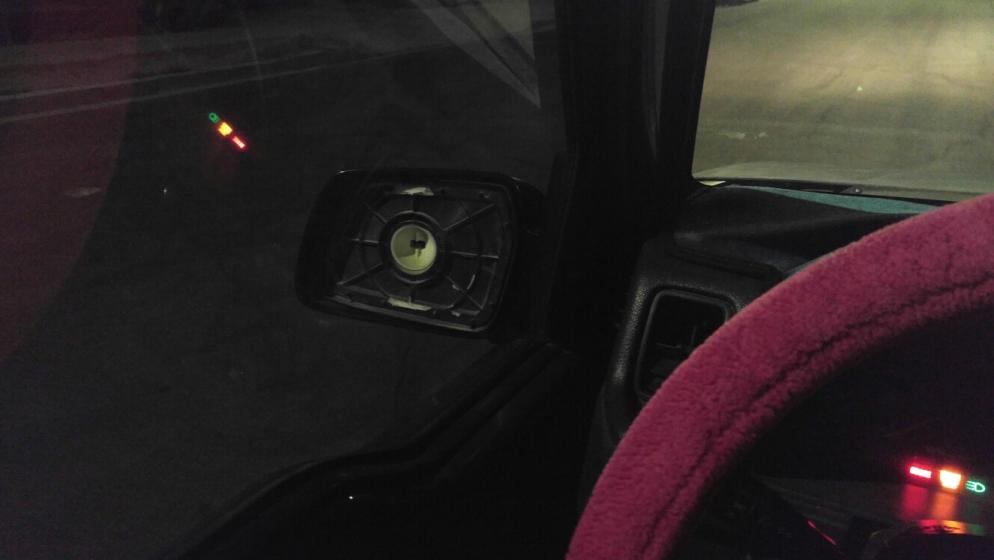 My mirror, was gone.

I pull into the nearest parking lot to a liqueur store, and sadly make a walk a quarter of a mile back to retrieve my broken mirror.

Most of it was intact, but it was beyond use. It was cracked like a child’s dream to become an astronaut.

I checked to see if any pieces were left, and shoved the tiny pieces out of the road to save car’s tires, and made a sad walk back to my car.

I gently placed my broken mirror in the passenger seat floor, and drove home, no lorry in sight thankfully.

But it didn’t end there.

I kept checking my driver mirror only to see nothing there, and instead of being sad about it, I found it quite funny.

Finally making it home, I realized a hug error I made.

I forgot my house key.

Accepting defeat immediately, since I have been locked out of the house before and there is not a single way in, I got in my car, and made some texts.

The only person I had to stay with for the night, did not respond for about 30 minutes.

After that 30 minutes passed, the car started to become cold.

I literally had 2 dollars in change left, that was my entire savings, and a slightly under half a tank of gas, so idling the car wasn’t a good idea.

I bring this up because in order to run the heat, the entire engine had to be running.

Accepting defeat, I covered my windshield with my wreaked sunshade, and crawl up into a ball in the back seat.

I used my work apron as a blanked, but that wasn’t very effective, most of my body was exposed anyways.

I would only have to deal with this for 4 hours, until the people in my house woke up.

Finding some peace, I drifted off into sleep. Only to be interrupted by my phone receiving a text.

I was very pleased to see it was that friend, saying that I’m more than welcome to stay over for the night!

I start my engine and run my heat full blast, and make a frantic drive there.

I entered the house freezing, and got to stay warm for the night.

So that was my Monday, how was yours?