WIP render of abalone game. I tried to make it as realistic as possible. However, it seems to me that I’m missing something here. Just can’t figure out the way to improve it… Any help and critique will be appreciated. 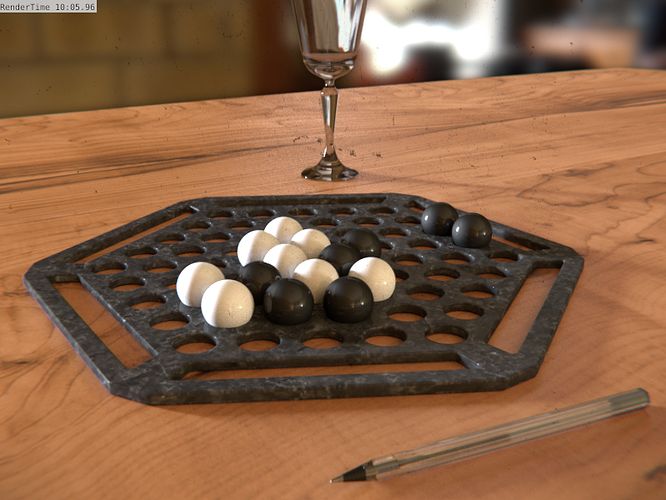 P.S. I used pen model by linolafett and table model by dpamplin

Details. Little imperfections in the balls, in the table and board. In reality, nothing is perfectly smooth, but everything in your current image is. Scratches, tiny bumps, dirt, dust, chips in the material, dirt in the corners, that kinda thing.

But keep at it! Looking good.

EDIT: Crus-T hinted a point that I would like to make re-inforce: the scene looks “set up”. The pen and the glass look like they are just there for the sake of filling up the scene. So make it look a little more natural, and I’m sure there’s plenty of ways to add “life” to a scene.

Hi,
Sam M is right, it could help to make it less perfect. The table texture could get some maps for instance (normal and maybe specular).
In addition I would suggest to add the balls that were eliminated from the game (6 white and 7 black).
The foot of your glass is too small and the glass looks useless as it is empty. Moreover in my mind two glasses would be better as it is a two players game.

There is something strange about the lighting too. The shadows indicates a lamp on the left, slightly from above, and your background indicates a strong light from behind. Do you use a HDRI ? It may looks more realistic to do so and maybe to add a lamp from above, as it would be in a real house (almost vertical lighting from above the table).

Thanks a lot for your comments. Here is the improved variant. I added some scratches to the table, some dirt and scratches to balls and board (these are poorly seen, however). Also added balls eliminated from the game and there are two glasses of wine now. I used this HDR image by Greg Zaal for lightning. 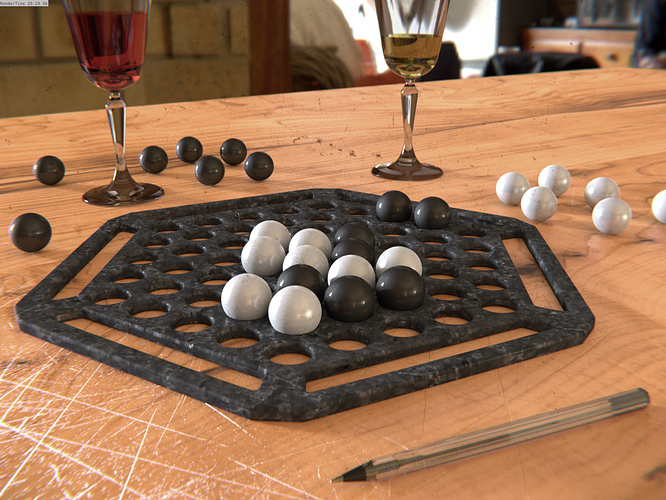 I think that the scratches on the table are way too strong, maybe try making them less strong. The background looks out of focus , but the table is perfectly in focus. Try adding depth of field, not too strong, but just so that the edge of the table is a bit blurred. The game board looks a bit fake, maybe add some maps (normal, displacement or bump) and work more on the texturing. And, I might be wrong, shouldn’t the balls out of the game be in the edge of the game board? Also, I can see a strong highlight in the table, but it doesn’t seem to match the lighting. The game looks to be in the middle of the table, so where would the players be? In a table, shouldn’t there be chairs, and other things, like a plant or something? Thinking of the little details, and how would this scene look in real life, if you were playing it, how would it look like. Then replicate it in blender with some changes for composition or art sake. I might sound too harsh, but that was not my point. It is a great image, I really like it, it could just use some more work on.

Very good work, but the wine should have some kind of bubbles on the top of the surface to make it look non-cgi

Thank you all for your help. Here is a new variant of the image. I reworked it seriously. Adding chairs (took them here, thanks to dpamplin) enforced me to change the camera and composition and also the HDR used for lightning. I added some droplets and bubbles on wine glasses (bubbles are poorly seen, however). Remapped and retextured the game board. 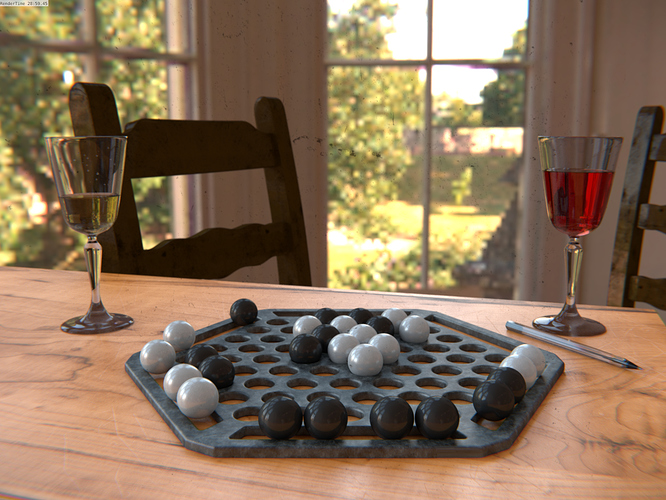 I also attach the old variant of the image, just to ask which one is better for you: 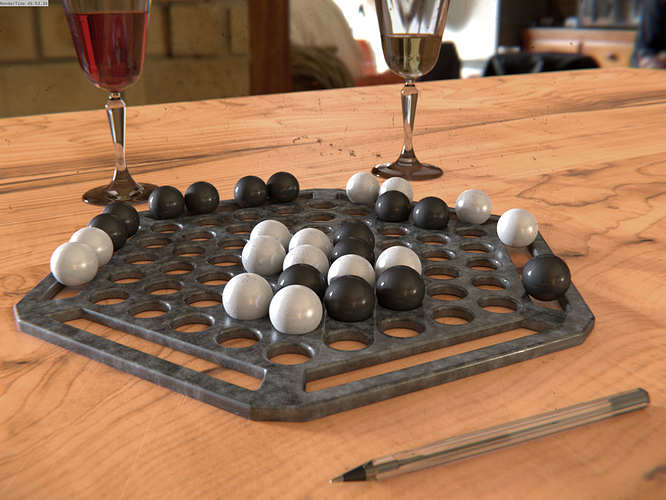 It is a good improvement, it come closer to reality and the composition of your scene feels more like it is the middle of the game.

I prefer the lighting of your new version, but the table looks too high compared to your background image. I think the bottom of our windows should be visible. (Except if it is a door, but the image looks like the room is at the first or second floor)

IMO droplets are not mandatory for wine, because it always acts strangely on the sides of a glass, forming “legs” or “tears” that would be difficult to model. The red wine could be darker, here it is just too dark for a rosé and too clear for a red wine.

This being said, I think you’ve done a good job, congratulation !

Thank you for your comments, tips and advices, they helped me a lot. So, here is the latest render. I darkened red wine a bit and removed droplets from both glasses. Also moved table to make window bottom visible.
Just to be fair, I give here a list of the models of other authors that I have used in my render: 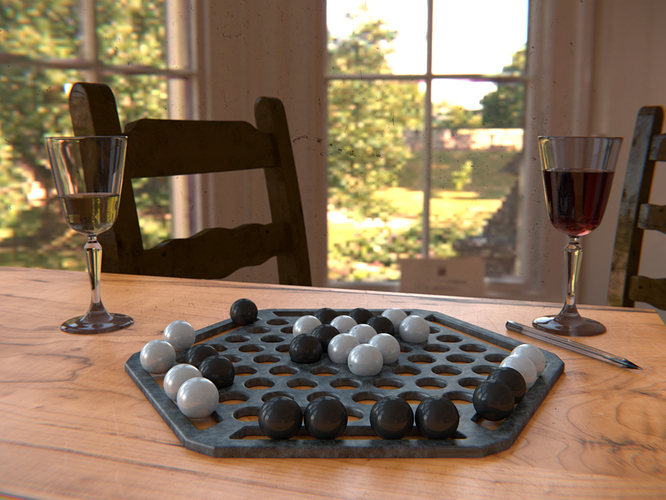 Well done !
I like your render, you can read the image and imagine the story behind the scene.
Good work