(I just discovered this is a problem in the current 2.42a Blender too)

Could someone tell me how to get past the 100 frame limit?

I have the December 7 blenderbuilds.com windows XP build of Blender. I add a bezier circle (trying to follow Bob Holcomb’s garbage matte tutorial) and insert a “curve” keyframe. I uncheck click the “relative keys” button and now I have the basis key. I exit edit mode and advance to frame 130. I add another curve keyframe. I edit the bezier circle and move some verticies. I exit editmode (the circle shifts). Now If I animate from frame 1 to 130, the curve deformation stops at frame 100.

Nope. It’s important to have unlimited frames in order to make the animated garbage matte for green screening as described in the Bob Holcomb Siggraph tutorial video. Please, does anyone know how to get more than 100 frames?

?? Unlimited Frames???
RW means set the PathLen parameter on the editor buttons for the curve to 130 instead of the default 100.

How did Bob Holcomb create curve keys beyond 100 frames in his siggraph 2006 video compositing tutorial? I mean, you can create absolute vertex keys at frame 101, 400, 1991, etc but when you try to animate the curve deforming, the deformation stops at frame 100. How do I make it go past frame 100?

It’s not the vertex keys…

Look at the attached image.

Select your curve then find this panel in the edit buttons

What does the “PathLen” value say?? 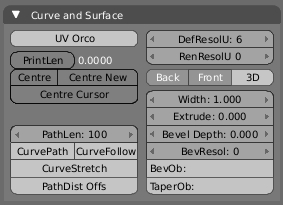 I changed the value to 130 but the deformation still stops at 100. Just to be clear, I attached an example blend file below called avk.blend (unzip the avk.zip file to get it). The bezier curve starts as a circle at frame 1 and changes to a square with sharp corners on frame 200. But the deformation stops at frame 100 so it doesn’t reach its final shape in frame 200. Notice that I changed the pathlenght to 130. (Why 130?)
http://markopuff.com/animations/avk.zip

OK, now I get what you’re saying. Sorry for the confusion, I’ll go kick myself!

I’ll have a look at the blend file and see if I can spot anything amiss.

(130 was because in your original post you said you were animating frames 1 - 130. I guess I just got obsessed.)

OK, now I get what you’re saying. Sorry for the confusion

Nasty. I see what you mean.

There used to be an IPO called the “speed curve” for absolute vertex keys that determined how fast the changes between keys would go. I’m pretty sure it’s been replaced by creating an IPO curve on the Basis key. Do this:

Set up all your absolute keys. In the IPO window, right click on the bottom-most key (which still should be called Basis). Ctrl-LMB to create a keyframe near (0,0). Tab into edit mode and press N. Select the key and set its coordinates (Vertex X, Vertex Y) to (0,0). Ctrl-LMB to make a second key at x=the length of your animation in frames, y= the point where this IPO crosses the topmost shape key. Probably at first it’s easiest to set this curve to be linear, extend mode extrapolation. An IPO like this will make the animation play 1:1, ie at the original speed. You can change the slope of this line to change the speed and endpoint of the animation. If you give it a negative slope the animation will run backwards. If you make it go up-down, the animation will go forward and backward. You can think of it like the Time curve on a mesh.

Let us know if this works for you. For me it worked intermittently when I was tyring out Bob Holcomb’s method.

EDIT: Works nicely in 2.42a starting with a Bezier circle. It’s actually pretty cool way to morph a shape if you don’t need mixed shape keys.

Let us know if this works for you.

Thank You CD38 !!! This works!
I attached a file below - just unzip absolute_vertex_key_IPO.zip file. I tried a slight variation on your instructions to suit what I am doing. What I am doing is bringing in about a minute of green screen video (sequence of images thanks to image refractor) and making a garbage mat. So I first create the basis key, edit the horrizontal line in the IPO editor and then cntl-LMB twice to add two points. The first point I make 0,0 and the second I make 2000,20 and set the interpolation to linear. 1 minute = 30 fps * 60 sec = 1800 frames so with 2000,20 the basis IPO curve covers the whole range . But I could have just as well followed your procedure of entering the absolute vertex keys first and then making the basis IPO curve. But by making the basis IPO curve first, I can preview the bezier circle deforming as I go.

Cool beans, I’m glad it’s what you need. I never thought to make the Basis IPO first! It makes a lot of sense.

Hmmm the 2.43 release candidate seems to crash whenever I try to select the basis key.

To the bug tracker, Robin…

Hi again. I am writing a video tut on Shapes and have made some edits to the wiki in the past. I did not know that Curves can have shape keys, hence my guess at PathLen. I see that 2.42a allows me to define a key via i->Mesh in the 3D view, BUT it does not appear to be well supported at this time.

Hmmm the 2.43 release candidate seems to crash whenever I try to select the basis key.

I also reported this bug.

BUT it does not appear to be well supported at this time.

I hope absolute vertex keys on a mesh work too - probably work the same as with a curve - by first setting the IPO curve on the basis key. I would try it but I am having such a great time now creating the garbage matt and green removal with nodes.

I hope absolute vertex keys on a mesh work too - probably work the same as with a curve - by first setting the IPO curve on the basis key.

It’s the same. Turn off Relative in the Shapes panel, and to get more than 100 frames create the IPO curve in the Basis key.

t’s the same. Turn off Relative in the Shapes panel, and to get more than 100 frames create the IPO curve in the Basis key.

Yep, it works in Blender RC3 too. Just one more thing before this thread is closed. Here is a sample animation of how I used the help you all gave me. I used the garbage mask to eliminate a nasty shadow where the boy is seated.