So, as you can see in the cap, I downloaded a pretty neat grass particle preset.

Only problem: one of the sets of grassblades seems to miss it’s material. Also in general i would like to be able to edit these matierials, e.g. weight painting the colour etc.
As you can see tho, none of the linked Collections in the Particle System show up in my Outliner. (it refers to a “cutgrass.001”, and there is also an unused “cutgrass” collection selectable as what to render in the render tab, but again, they’re nowhere to be found in MY blend file. how do i get them there?

A similar question has been asked here before but went unanswered. There is also a similar question on stackexchange that deals with an older version of blenderkit, which is now irrelevant because THAT has been fixded. 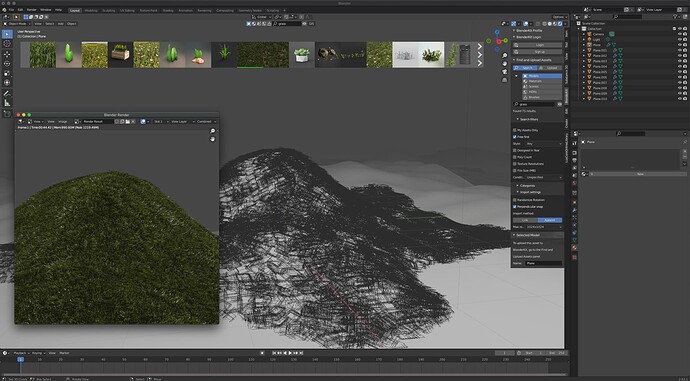 Also, having it set up like this, i can’t switch the viewport display of the instanced object, leaving me with a metric shite tonne of bounding boxes. I much rather have less Foliage in the viewport than the render but actually see the size/rotation of my particles etc.

I dont use blenderkit that often. The libary is saving a file with the object in a specific folder you have on your computer. Can look it up in the addons tab in the blender settings.

There should be a particle system where you can set the amount of it.

For the variations i think there is no way around it to set it up again but before that importing the gras object from the file. You can make a group and use that as the particle system.

But i dont recommend blenderkit assets for gras to be honest. You should be able to find a better addon for gras.

well the one i have shown up there is perfect for my job.

but i do have graswald… yes… just… not at work

btw thats a bit of a drag, having to do it manually when the whole point is to not do that

As i said not an expert in blenderkit so might be worth to check for a tutorial on it or the documentation.