I was following this tutorial on importing multiple animations into a rig. Everything works as far as importing goes but I’ve run into a problem when it comes to switching animations. When I change the animation in action editor on my rig to the imported walk-cycle it looks like it’s trying to add instead of replacing my animation. Result? An animated walking t-pose… 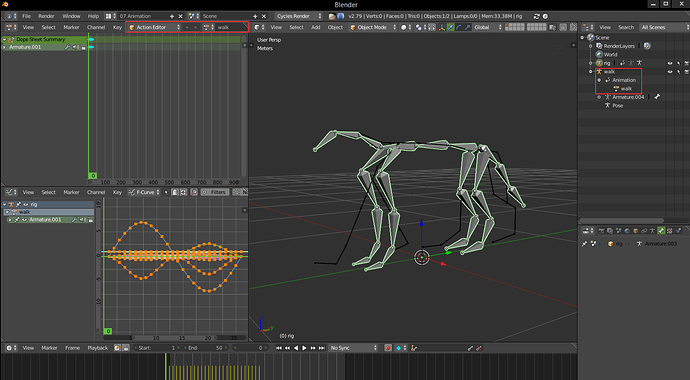 I would expect the rig (green) to match the stick one (imported) once I change the Action to walk in the Action Editor (marked red) like in the tutorial.
In other words I want to apply the animations from the walk armature to the rig but it’s starting from the rigs tpose instead of the walk pose.
There’s nothing special about the rig, it’s a tpose from the same file as the rest of the animations.
What am I missing?
cat.blend.zip (288.3 KB)
Thanks

Hey, So as far as ‘actions’ go - when you have an ‘action’ active (it’s name is in the field box) blender assumes you are still working on it (adding / subtracting / modifying) When you are done with an ‘action’ most people click the “F” and then the “X” buttons and the field box becomes blank. That keeps the ‘action’ and unlinks it from the current timeline - that way you can go and create another ‘action’ or not. The NLA editor is where you arrange your ‘actions’ into ‘strips’ to become longer animations. Hope this is helpful…

Thanks but the problem is in matching animations to the rig rather than interface issues. It keeps trying to start every animation on the rig from the tpose instead of the first frame of the animation.
We kind of solved it by collapsing all the animations into one long timeline in max before exporting to just one fbx and then dividing it up into clips in blender but importing multiple animations into blender is still a mystery to me.

Maybe you have a strip laid down in NLA and Blender is adding the active action to it ?

Well there is a strip in NLA but removing it and assigning the walk animation doesn’t change anything. The character still starts the animation from tpose.

Akh dang, then I’m not familiar enough with NLA to troubleshoot this, sorry.

Ok, I think I get what your saying, do you have a file you can post with the issue ?

Hey, I had a peek at your file, you are correct in the fact that when you add the action to the rig it propagates that from the rest pose - that should be normal. Now how to fix it or get the behavior you wish…not too sure. Will have to do a little more research on this.

So what I need is not default behavior? Is there a different way of attaching multiple animations to a rig in blender?

Hey, unable to find a solution, I would pm @DanPro with a link to this thread, sorry for the lack of help.

Thanks for the effort, it’s not that important really. We tackled it with importing one long animation but maybe someone with an answer will stumble upon this thread.